​India has reported about 0.3 deaths per lakh population which is amongst the lowest in the world, the Union Ministry of Health said on Tuesday.

Agarwal said a total of 60,490 infected patients have recovered so far. "Recovery rate continues to improve and presently is 41.61 percent." He also said that India's fatality rate is also amongst the lowest in the world, presently at 2.87 percent. 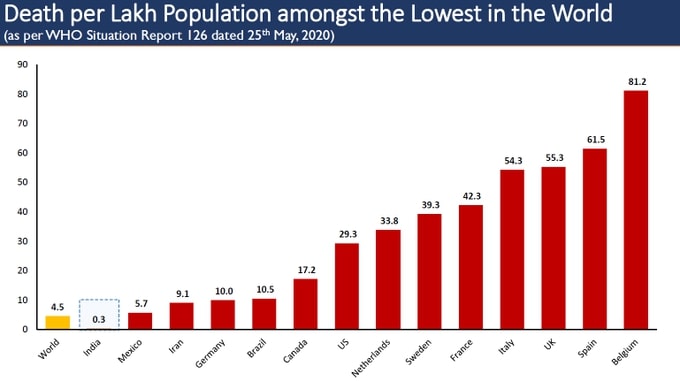 "In terms of fatality rate, we have surprisingly found a low fatality rate in India which is very good. There are several hypotheses on this but we can't say anything clearly on any factor. Hope it continues," Dr. Balram Bhargava, Director General of the ICMR further elaborated.

The ICMR Director-General informed the reporters about an increase in testing for coronavirus. "The testing has gone up in the last few months. 1.1 lakh samples are tested daily," he said.

The number of active COVID-19 cases climbed to 80,722, while 60,490 people have recovered and one patient has migrated, it said.

Of the 146 deaths reported since Monday morning, 60 were in Maharashtra, 30 in Gujarat, 15 in Delhi,10 from Madhya Pradesh, seven from Tamil Nadu, six from West Bengal, four each from Uttar Pradesh and Rajasthan, three from Telangana, two each from Himachal Pradesh, Jammu and Kashmir and Karnataka and one in Kerala.