Over 350 cameras have been installed and their footage is being monitored round the clock through two-police control rooms situated in and around the Red Fort area, police said.

A multi-layered security cover has been put in place to secure the historic Red Fort from where Prime Minister Narendra Modi will address the nation on the 75th Independence Day on Sunday. The security ring, including NSG snipers, elite SWAT commandos, kite catchers, canine units, and sharpshooters on high-rise buildings, has been placed around the Mughal-era fort, and adherence to social distancing norms will be must like last year due to the Covid pandemic.

According to the police, anti-drone systems have also been installed at the Red Fort in view of the recent terror attack at IAF station in Jammu airport where Pakistan-based terrorists used drones to strike the vital installation for the first time.

India's Olympic contingent will be at the Red Fort as special guests on August 15. Over 350 cameras have been installed and their footage is being monitored round the clock through two-police control rooms situated in and around the Red Fort area, police said. There will be around 5,000 security personnel at the Red Fort and they will adhere to social distancing norms, they said.

The Delhi Police had erected a huge wall of shipping containers decorated with graffiti for the first time earlier this month at the main gate of Red Fort for security reasons. The containers have been placed in such a way that no one will be able to see inside the premises of the fort when the prime minister addresses the nation. Nobody would be able to peek inside the fort from the Chandani Chowk and adjoining areas, the polcie said.

The move came after many protesters driving tractors reached the Red Fort and entered the monument on January 26 and hoisted a religious flag.

Over 70 police vehicles – including PCR vans, 'PRAKHAR' vans and QRT (Quick Reaction Team) vans will be stationed at the Red Fort area as part of security deployment along with intensified patrolling by police personnel on motorcycle, the police said. Patrolling on motorboats will be carried out in the Yamuna river by the Delhi Police to ensure no untoward incident takes place in the national capital.

Security arrangements have also been tightened at the Delhi borders where thousands of farmers have been protesting for over seven months against the centre's new agri laws.

The police have already carried out anti-sabotage checks in the area and visited hotels in the vicinity in search of suspicious elements, officials said, adding security verification of the residents, including tenants and servants, has also been conducted.

On Friday morning, a full-dress rehearsal of the 75th Independence Day celebrations was held at the Red Fort. Personnel from the Army, Navy and Air Force marched across the Mughal-era structure. 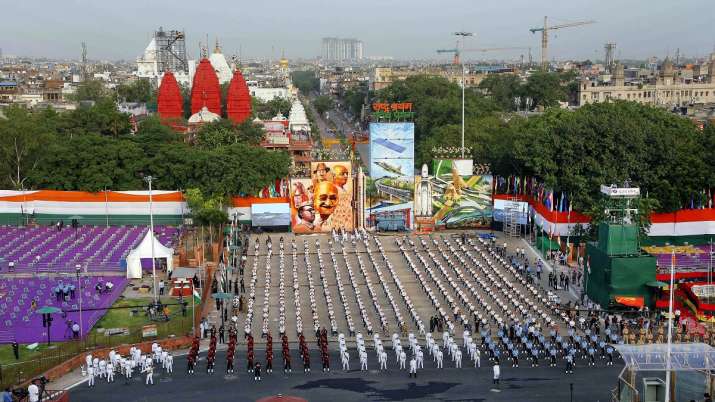 The security arrangements were stringent and there were traffic restrictions during the rehearsal. The Red Fort has already been closed for public, officials said. Police personnel have been asked to keep an eye in the sky to ensure that no stray kites are seen in the areas around the Red Fort during Independence Day celebrations.

The Delhi Traffic Police had also issued an advisory for the Independence Day function at the Red Fort to ensure safe and smooth flow of vehicles across the city. Eight roads -- Netaji Subhash Marg, Lothian Road, SP Mukherjee Marg, Chandni Chowk Road, Nishad Raj Marg, Esplanade Road and its Link Road to Netaji Subhash Marg, Ring Road from Rajghat to ISBT and Outer Ring Road from ISBT to IP flyover -- will be closed for the general public from 4 am to 10 am, the advisory said.

The Delhi Police had seized a drone flying near Vijay Ghat, the backside of the Red Fort. The Jaguar highway patrolling team of the north district was patrolling in the area on Monday when it saw a drone near Vijay Ghat. A web series was being shot in the area, police said, adding permission was granted to shoot the show but sanction had not been given to fly a drone. A case was registered in this regard under relevant sections at Kotwali police station and the device was seized.