The students of Gargi College on Monday protested against the principal and the college administration over the mass molestation and harassment incident that rocked the campus during their Annual fest. The 'indefinite strike' will take place on a daily basis at a college space till all their demands are met, students said. Meanwhile, the college authorities have filed a complaint at Hauz Khas Police station. 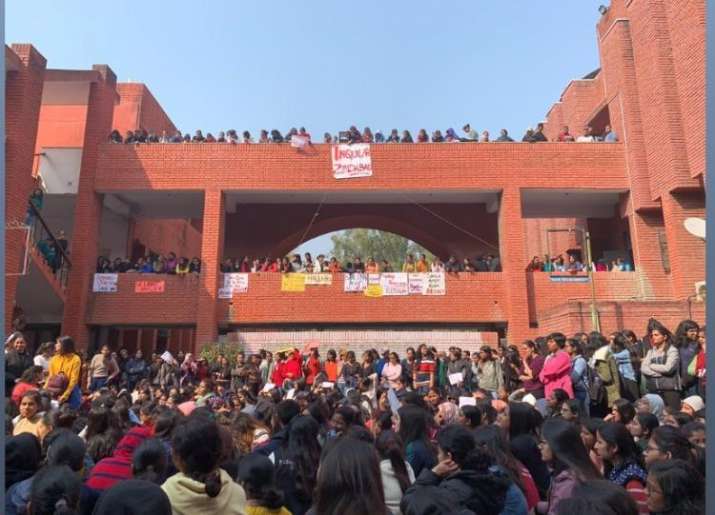 While addressing the media, principal of the college, Dr Promila Kumar, said: "We've set up a high-level fact-finding committee to meet with the complainants, eyewitnesses and any other person having relevant information."

"The committee will prepare, in a time-bound manner, a report of the complaints for submission to the police, if complainants so desire. The students also have the option of approaching the ICC of Gargi College for a confidential inquiry. The institute will file a report of complaints to the police at the earliest so perpetrators can be brought to justice. We'll set up a security protocol to ensure such incidents never take place again," she added.

On Monday, around 10 am, the students gathered near the main arc of the college. Meanwhile, all the complaints, testimonials and demands were read to all the students.

The Delhi Police had said it has launched a probe into the incident and is scanning CCTV footage to gather evidence.

In the meantime, the Delhi Commission for Women (DCW) addressed the student body and informed that they'll send an official notice to the administration of the Gargi College and to the police stationed on campus on 6th of February.

DCW also summoned the Principal Dr Promila Kumar, asking her to appear before it on 13th February at 2:00 PM.

DCW Chief Swati Maliwal said: "We are investigating the matter and issuing notices to Delhi Police & college administration. Action should be taken against those who did this and those who protected them."

#GargiCollege students will go for indefinite strike till the administration meet all their demands #GargiCollege #Gargi pic.twitter.com/h6hf0brHP1


"At 12:30 the staff council and administration addressed the students again where in the student body was told that a fact finding committee would be set up which will comprise of an elected teacher and student from each department that brings it to a total of 34 member team," a student said.

"The committee will work independent of the administration and all other forms of authorities in college. Further questions and grievances were addressed to the entire administration and the principal were a written apology , a minimum security plan, a press release and written answers were demanded. The administration has been granted two days to get back to the student body with the demands which also includes the breakdown of the entire budget of reverie with special emphasis to the budget allocated to the security," she added.

The students will sit on an indefinite strike till all their demands are met.

On February 6, several students were groped, molested and assaulted during their Annual fest. The alleged that several outsiders broke down their gates and entered their college. Students and teachers posted on social media about the incident. As per their posts, during the college festival, 'Reverie', around 6:30 pm on February 6, groups of unruly, drunk men mobbed the entrances of the college and forced their way in.

The students alleged that Rapid Action Force and Delhi Police personnel were deployed close to the gate from where the men allegedly entered.