Thousands of farmers from Punjab and Haryana are marching towards the national capital to protest against the Centre’s contentious farm laws. The farmers are expected to reach Delhi today through five highways connecting the city as part of the “Delhi chalo” call by the All India Kisan Sangharsh Coordination Committee (AIKSCC), Rashtriya Kisan Mahasangh and various factions of the Bharatiya Kisan Union.

The massive farmers' protest march from Punjab to Delhi kept the Haryana and Delhi police forces on their toes on Thursday. As Delhi Police at the Haryana border geared up to restrict the possible entry of farmers into the capital, their counterparts in Haryana were also tested as thousands of farmers, some armed with sticks and swords, flung barricades into a river, threw bricks at cops and physically pushed vehicles as they were stopped by Haryana Police on their way to protest in Delhi.

The farmers at Punjab-Haryana border were seen toppling barricades into a river and throwing bricks and stones as they clashed with the police. The protesters were also seen removing heavy barricades from their way as they braved tear gas shells and water cannons.

The Delhi Police started the preparations early and at Singhu border the police were seen putting up barbed wire and boulder barricades to stop farmers' trolleys heading towards Delhi. In innovative tactics deployed by Delhi Police, the force also stationed trolleys filled with mud and sand to put up some weight on the roads in an effort to block the march of protesting farmers who are protesting against the Centre's controversial farm laws.

Drones were also deployed to check the farmers' march from a distance as senior police officers themselves kept vigil at the border areas.

"We are in constant touch with Haryana Police and every development is communicated to stop the march of farmers towards Delhi. We will take legal action if the farmers try to enter the capital," said Ingit Pratap Singh, DCP, South West Delhi. Tight vigil was seen at Singhu border, Faridabad border, Gurugram and also borders adjoining western Uttar Pradesh at Chilla border, DND and Ghazipur.

Not just highways, small lanes and roads were also blocked by Delhi Police to rule out the possibility of the farmers sneaking into the capital.

Due to the security checks in view of farmers' 'Delhi Chalo' protest march, heavy traffic congestion was witnessed at Singhu border (Delhi-Haryana border), Delhi-Gurugram border and Kalindi Kunj near Delhi-Noida border on Thursday. Delhi Metro services from NCR stations towards Delhi will remain suspended on Friday as well.

"As advised by Delhi Police, Metro services will be available only from Delhi towards the NCR sections. However, services from the NCR stations towards Delhi will not be available due to security reasons till further notice," DMRC tweeted. A group of student activists from JNU, DU and AISA who went to join the farmers' protest at Jantar Mantar were also detained by the police on Thursday.

Some 500 farmers' organisations from six states - Punjab, Uttar Pradesh, Haryana, Uttarakhand, Rajasthan and Kerala - have been planning the November 26-27 march for two months to press the central government to repeal the recently-enacted farm laws.

The farmers here are agitating against the bills that they (Centre) have brought. You can't stop a person going to your capital city where Parliament is and expressing their views. Why are you stopping them? Punjab CM Captain Amarinder Singh

Police use water cannon & tear-gas shells in Karnal to disperse farmers from Punjab heading towards Delhi. Security increased further at Delhi-Karnal Highway as farmers intensify their protest by trying to break through barricades & move towards Delhi.

Security increased further at Delhi-Karnal Highway as farmers intensify their protest by trying to break through barricades & move towards Delhi. pic.twitter.com/5xyCelzRWc

5:32 PM: Metro services to be available only for NCR stations

As advised by Delhi Police, Metro services will be available only from Delhi towards the NCR sections. However, services from the NCR stations towards Delhi will not be available due to security reasons till further notice.

4:50 PM: Farmers don't want to begin their campaign under any political flag. Farmers of all parties stand united on this (Farm Laws) issue. Captain Amarinder Singh played the most bungling role as he didn't protest at all. A CM's pressure on Centre matters a lot. If CM wants, he can resolve a lot of things. Captain Amarinder Singh should have put pressure by going to Delhi and holding a meeting with Centre. Also, I want to appeal farmers of Haryana that they should support Punjab farmers, says Shiromani Akali Dal Chief Sukhbir Singh Badal.

Traffic heavy at Kalindi Kunj near Delhi-Noida border due to checking of vehicles, in view of farmers' 'Delhi Chalo' protest march.

Delhi: Traffic heavy at Kalindi Kunj near Delhi-Noida border due to checking of vehicles, in view of farmers' 'Delhi Chalo' protest march pic.twitter.com/AoiiFddjlT

2:20 PM: Tight security in Delhi in view of farmers' march

DCP says, “No farmer groups are moving in this direction. Same information was shared by my counterparts. We're checking vehicles.” pic.twitter.com/4PnIt072LA

Farmers Protest LIVE: Union Agriculture minister Narendra Singh Tomar on Thursday said that the government is ready to hold talks with farmers bodies. He asked the farmers not to fall prey to the misinformation being spread by the opposition. He said that the three agriculture laws are in the interest of farmers.

Punjab Chief Minister Amarinder Singh on Thursday lashed out at the BJP-led government in Haryana for stopping farmers from moving towards Delhi, saying the use of "brute force" against them is “totally undemocratic and unconstitutional”. Haryana has completely sealed its borders with Punjab to prevent farmers from entering the state for their 'Delhi Chalo' protest march against the Centre's farm laws. “Why is @mlkhattar govt in Haryana stopping the farmers from moving to Delhi? The tyrannical use of brute force against peacefully protesting farmers is totally undemocratic & unconstitutional,” said Singh in a tweet.

1 AM: Farmers protest: Vigil stepped up in bordering areas of Delhi

The Delhi Police on Thursday strengthened its presence in border areas of the national capital in view of the 'Delhi chalo' protest march by farmers against the Centre's new farm laws. At the Singhu border, the Delhi Police stationed trucks filled with sand to stop movement of tractors driven by farmers, police said. This is the first time that the city police has stationed trucks filled with sand at border points. Police said the border has not been sealed but they are checking all vehicles entering the national capital.

Massive traffic jam on Delhi-Chandigarh highway due to farmers' protest in Haryana. The Haryana government has already sealed the Punjab border to block protestorts from entering the state.

11:55 AM: Haryana Police use tear gas to disperse Punjab farmers at Shambhu border

Security personnel use fire tear gas shells to disperse a crowd of farmers gathered at the Shambhu border between Haryana and Punjab, to protest the farm laws

#WATCH | Security personnel use fire tear gas shells to disperse a crowd of farmers gathered at the Shambhu border between Haryana and Punjab, to protest the farm laws pic.twitter.com/11NfwLcEQZ

Farmers protest in Delhi: Senior Congress leader Priyanka Gandhi Vadra on Thursday said it is absolutely wrong that farmers are being prevented from holding peaceful demonstrations against the Centre's new farm laws.

11:25 AM: Tight security at Rohtak-Jhajjar border

The Haryana government has deployed security officials at the Rohtak-Jhajjar border in view of farmers' 'Delhi Chalo' protest march.

Banking operations in public sector banks across the country were partially affected on Thursday as some bank unions joined the one-day nationwide strike called by central trade unions. Cash transaction including deposits and withdrawal at branches, forex and government transactions have been impacted in many public sector banks where participating unions are strong. However, State Bank of India and private sector banks are functional.

Normal life was partially affected in parts of West Bengal on Thursday due to the nationwide strike called by several trade unions in protest against the Centre's economic policies. The 24-hour bandh called by a joint committee of the central trade unions began at 6 am. Bandh supporters, mostly activists of CPI(M)-affiliated outfits like CITU and DYFI, brought out rallies in Jadavpur, Garia, Kamalgazi, Lake Town and Dumdum areas in and around Kolkata, disrupting vehicular movement and asking shopkeepers to pull down the shutters of their establishments

Police use water cannon to disperse farmers gathered at Shambhu border, near Ambala (Haryana), to proceed to Delhi to stage a demonstration against the farm laws

Bus services affected, markets closed in Kochi as trade unions have called for a nationwide strike against Centre's new labour and farm laws 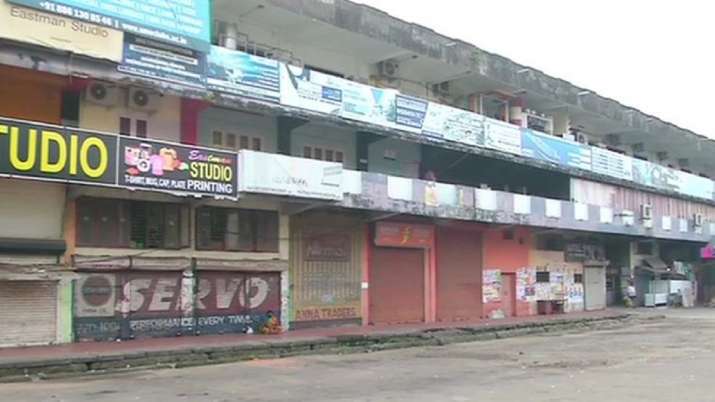 8:42 am: Heavy deployment of police personnel on the Singhu border (Delhi-Haryana border). Police also use drones to monitor situation.

8:35 am: Railway track blocked at Belgharia station in North 24 parganas

The members of Left trade union block railway track at Belgharia station in North 24 Parganas (Pics 1&2) and hold a demonstration in Kolkata (Pics 3&4), during a nationwide strike against Centre's new labour and farm laws

8: 20 am: Security heightened at Delhi-Faridabad border 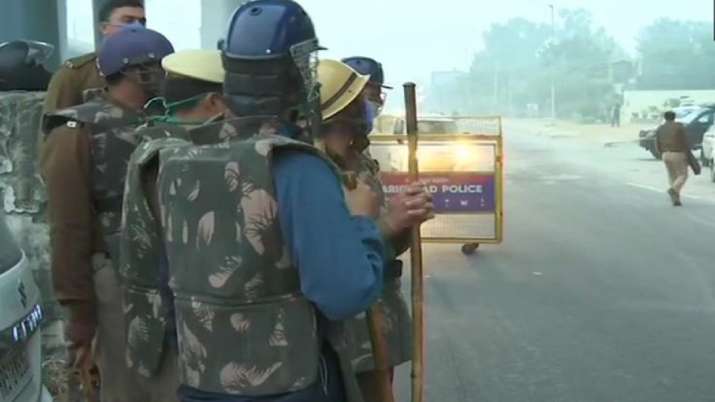