The #MaaClicks theme is this year's attraction at the puja of Hatibagan Sarbojonin. The concept is being executed in association with the online edition of a popular Bengali daily.

From Goddess Durga clicking a photograph of a visitor with an AI smart camera in one puja marquee, to drawing of traditional 'alpana' before the idol by gender minorities in another - Durga pujas in Kolkata have everything on offer.

The AI (Artificial Intelligence) smart camera has been placed inside the third eye of the Durga idol in a north Kolkata community puja and the device will click the photo of a person who will stand before the deity with his or her hands folded.

The #MaaClicks theme is this year's attraction at the puja of Hatibagan Sarbojonin. The concept is being executed in association with the online edition of a popular Bengali daily. 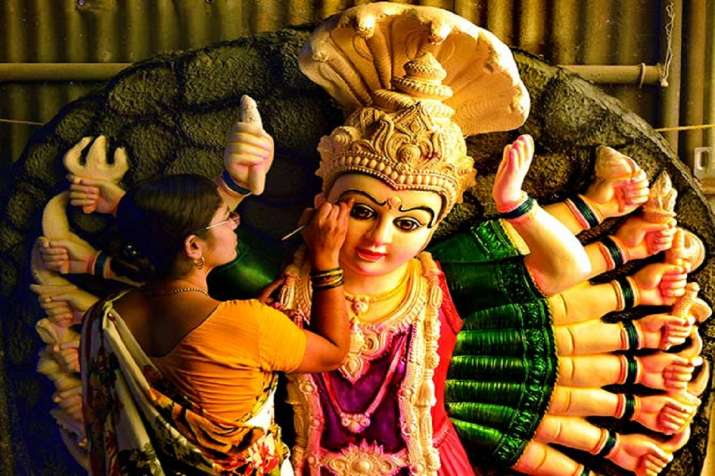 "After the image is captured, it can be seen on a digital screen in front of the devotee along with a QR code. If the person scans the QR code, the photograph will be automatically shared on his/her Facebook Timeline," a

spokesperson of the daily said. The camera placed inside the eye is programmed to detect the human posture. It is a state-of-the-art technology where artificial intelligence plays a major role, an official of the puja committee said.

"It is an initiative to revive traditional values and age-old rituals among the new generation. This will help people have a darshan of the deity without having to take the trouble of snapping selfies," the spokesperson said.

If that is the attraction of the north Kolkata puja, the Adi Ballygunje Sarbojonin Durgotsav in the southern part of the city, seeks to build awareness among pandal hoppers with its theme, "Freedom of Love" that highlights the need for inclusiveness of the LGBTQI community in the society.

In its 70th anniversary, the puja committee has taken up the theme in association with 'Prantakatha', an NGO that works for the gender minorities, a member of the committee said.

As part of the theme, members of the LGBTQI community has painted 'alpana', traditional Bengali motifs drawn during pujas, at the marquee.

Various other decorations and paintings inside the marquee are also being crafted by them, the committee member said.

Earlier, the IPS officer was named in column 12 of the charge sheet owing to lack of evidence but in the final charge sheet, he has been named in column 11 as an accused after the phone call records and other pieces of evidence proved that he and the woman were together in the hotel at the time of the incident as claimed by her, the official added.

When contacted, the woman said she did not wish to comment as the matter was sub-judice.

Also Read: In the name of God: Kolkata to go 'green' this durga puja