A sub-lineage of the Delta variant of COVID-19, AY.4.2, has been detected in the United Kingdom, China, and Russia, and now it has made its way to India.

Amid third Covid wave scare, as many as 17 cases of the Delta variant AY.4.2 strain, which is spreading rapidly in the United Kingdom, has emerged in India. These samples were collected between May, September 2021. A total of 19,466 sequences were submitted from India to GISAID for the same time period.

A sub-lineage of the Delta variant of COVID-19, AY.4.2, has been detected in the United Kingdom, China, and Russia, and now it has made its way to India.

Several states including Andhra Pradesh have reported 07 cases of new strain, Kerala 4, Karnataka and Telangana 2 cases each, Jammu & Kashmir and Maharashtra have reported 1 case, respectively taking the total tally to 17.

The Commissionerate of Health and Family Welfare Services in Karnataka issued an official memo warning the public against the AY.4.2 strain.

"As the complete nature of the said newly reported variant is yet to be understood, it is crucial to step up vigilance & follow Covid-19 appropriate behavior instead of creating panic among the public," the note read. 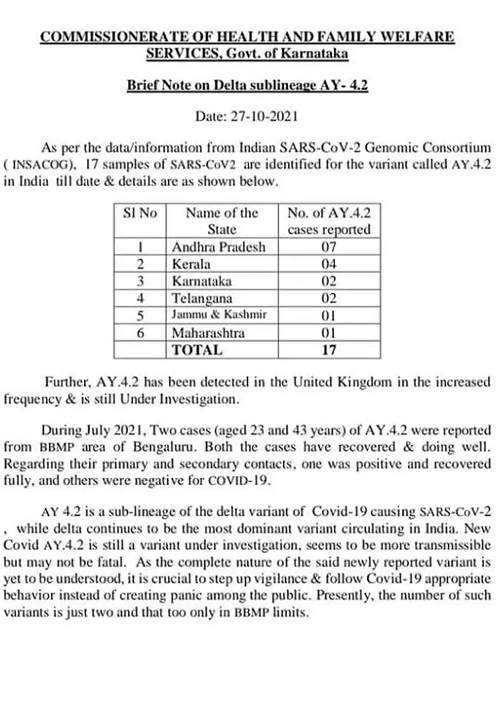 Following the rise in the cases, the Centre decided to step in ahead of the festival season as fears of COVID-19 third wave mounts.

Also, the Centre has issued several guidelines to curb the possibility of a third COVID-19 wave.

AY.4.2 has grown steadily in volume and now accounts for about 9 per cent of UK cases in the last 28 days. It has also been observed in a few European nations like Denmark, Germany and Ireland.

AY.4.2, one of 45 sub-lineages of Delta and dubbed by many as Delta plus, is likely to be named as Nu.

According to British scientists, it may be up to 15 per cent more transmissible than the original Delta and according to a report by Daily Mail, its prevalence in England doubled in a month from being behind four per cent of cases in September to 8.9 per cent in the two weeks to October 9.

Does AY.4.2 cause more severe illness?

There is no clear indication from the UK that AY.4.2 leads to more severe illness, according to initial analyses.