As per the representation received by Dharampuri, While Krafton, which is controlled by Chinese company Tencent, is relaunching PUBG in India and has stated that it will store the data for this game in Singapore and India.

In a letter to Union Minister Ravi Shankar Prasad, Arvind Dharampuri (Member of Parliament from Nizamabad) has stated some recommendations against the launch of Battlegrounds Mobile India - a relaunch of banned PUBG Mobile game in India. According to the MP, he has received multiple representations against the game and the issues put forth by these are of serious nature and need to be examined by the government.

As per the representation received by Dharampuri, While Krafton, which is controlled by the Chinese company Tencent, is relaunching PUBG in India and has stated that it will store the data for this game in Singapore and India. It also stated a peculiar clause for international data transfers, to operate the game service and meet legal requirements. 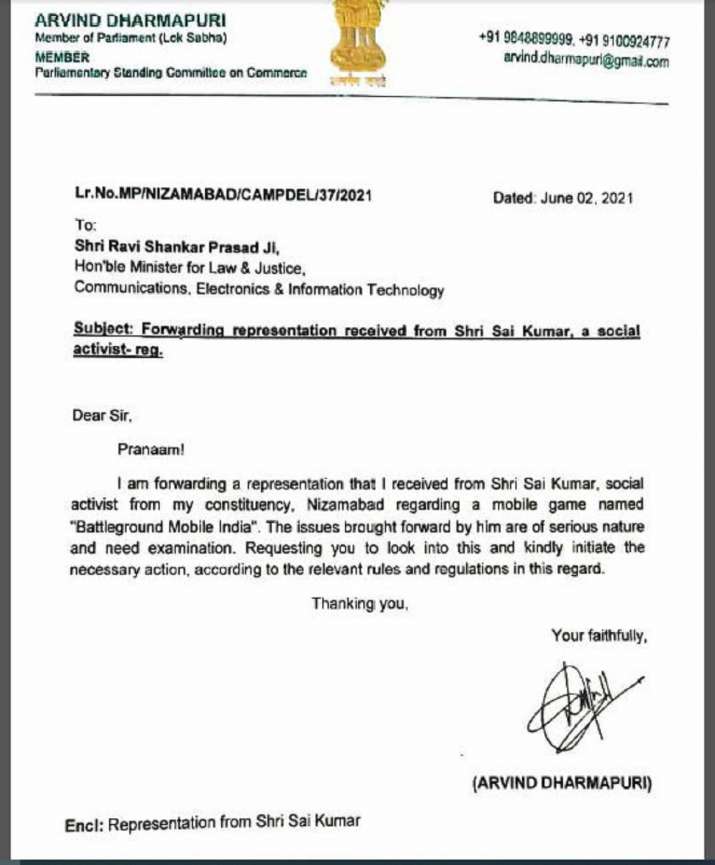 Time and again, Prime Minister Narendra Modi has stressed the need to support India's emerging gaming industry, along with the development of games that are based on Indian culture and history.

The prime minister has also emphasized the need to conduct hackathons for online games, to reflect Indian ethos and values.

Buoyed by this encouragement, the Indian gaming industry has expanded in the last few years and is projected to grow at a significant rate.

However, there are some foreign companies backed by Chinese investments and with close ties to CCP which are trying to capture the data of Indian citizens.

As a result, last year, the Government of India had banned over 200 applications from China, which are now trying to enter the Indian market with the help of Indian companies.

The game is being marketed as an Indian game, developed only for India, can be played only by users in India, will be hosted on servers in Singapore and India, and Krafton/ Tencent have a full team here, one needs to ask the need for sending the data to other countries and why are the South Korean laws applicable.

However, given the huge Tencent stake in Krafton, it will be contractually bound to transfer this data and MP Arvind Dharampuri has requested the Union Minister to ask Krafton to share its investment and shareholder agreement with Tencent for government scrutiny and to dispel this suspicion.

Multiple countries including all the Quad members are examining Tencent investment in firms in their country as national security concerns, and since Krafton’s IPO is imminent Tencent needs to find new markets to grow and gain from this IPO. The relaunch seems like a way to sidestep the ban and circumvent laws, which should not be allowed.

Moreover, recently multiple public representatives including Arunachal MLA and others have asked for a ban on the relaunch of the game.

However, these people were subject to vitriolic cyber harassment, death threats and racism by PUBG influencers. There were statements made by Chinese sponsored bots and trolls that Arunachal Pradesh is a part of China and which questioned the patriotism of our fellow citizens from the northeast.