According to leaders who were a part of Akhilesh's convoy, they could initially cover only 60 km in the first four hours as people kept pouring in large numbers on the Purvanchal Expressway.

For the optimist, it was a fantastic political premiere, ahead of the assembly elections, scheduled early next year in Uttar Pradesh. The fourth leg of Samajwadi Party president Akhilesh Yadav's Vijay Yatra from Ghazipur to Lucknow on the newly inaugurated Purvanchal Expressway, took more than 16 hours to reach the state capital at 4 a.m. on Thursday.

The yatra had begun at 1 p.m. on Wednesday. Huge crowds turned up along the route to cheer their leader.

According to leaders who were a part of Akhilesh's convoy, they could initially cover only 60 km in the first four hours as people kept pouring in large numbers on the Purvanchal Expressway.

"Even during late evening and night, there were crowds brimming on the streets. We have never seen anything like this before," he said.

Akhilesh received a tumultuous welcome by his supporters in Amethi around 1 a.m. on Thursday and then in Ayodhya around 2 a.m. The rally reached Barabanki around 2.30 a.m., Lucknow around 4 a.m. on Thursday.

During the rally, Akhilesh attacked the ruling BJP saying, "We have yellow from Om Prakash Rajbhar, the SP's green and red and soon we will have green and white from the RLD. We have multiple colours with us, unlike the BJP that just has one colour. Those with one colour do not represent all and will not be able to do any good for you." 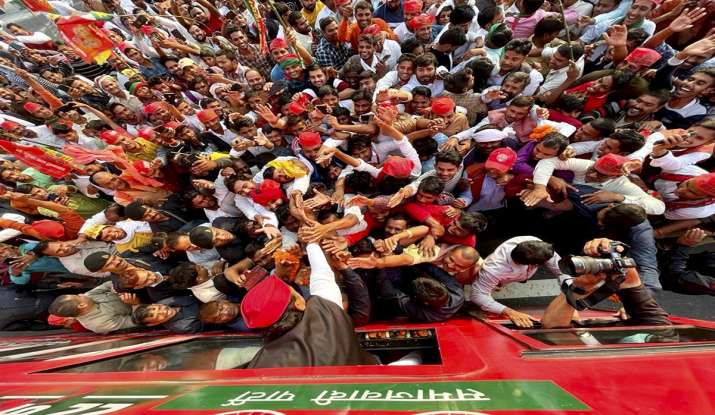 A visibly tired Akhilesh said, "I think this is one of the longest yatras of the Samajwadi people, but don't think the Yatra has ended because it will continue and will stop when we will see the SP back in the government."

The party firmly believes that whenever Akhilesh gets on to his Rath Yatra, it brings luck for the party. The SP chief had embarked on a similar Yatra in 2012 and the party went on to form a full majority government the same year.

Party leader and former minister Arvind Singh Gope said, "The unprecedented response to the rally indicates that people are yearning for a change. In my political career, I have never seen this kind of a crowd that stayed up all night to meet the leader. This shows that the Samajwadi Party is all set to form the next government under the leadership of Akhilesh Yadav."