The India Meteorological Department has predicted heavy to very heavy rainfall in Mumbai and adjoining areas on Monday. Schools and colleges in Mumbai, Thane, Nashik and Raigarh will remain shut today due to heavy waterlogging. The state government has sought six more teams of the NDRF to tackle any eventuality. Meanwhile, flight operations were disrupted on Mumbai airport and several long-distance and local trains were delayed or cancelled.

Normal life in Mumbai and adjoining areas was crippled for the second consecutive day on Sunday after heavy rains lashed the city. Train services were disrupted and flight operations were put on halt, while heavy downpour caused power outage in neighbouring Thane and Palghar districts. At least 4 deaths were reported in Mumbai, Pune and Palghar due to rain-related incidents, while a man is missing after he fell into a swollen nullah in Dharavi in Central Mumbai in the afternoon.

Meanwhile, the Met department has forecast intermittent rain with heavy to very heavy showers in Mumbai and suburbs and extremely heavy rain at isolated places in the next 24 hours. The state government has sought six more teams of the National Disaster Response Force (NDRF) to tackle any eventuality. Authorities have declared holiday for schools in Thane, Pune, Nashik and Raigad districts on Monday with the prediction of heavy rains.

08:40 am: A 36-year-old man died on Sunday while another is feared drowned after their car plunged into a stream of a waterfall near Koynanagar in Satara district of Maharashtra.

08:20 am: Around 8,500 people from low-lying areas in Diva in Thane district were shifted to safer places.

08:14 am: Four out of the five districts in western Maharashtra have received more than 100 per cent of average rainfall so far this monsoon, Pune Divisional Commissioner Deepak Mhaiskar said.

07:55 am: Central Railway's suburban services have been made operational up to Titwala 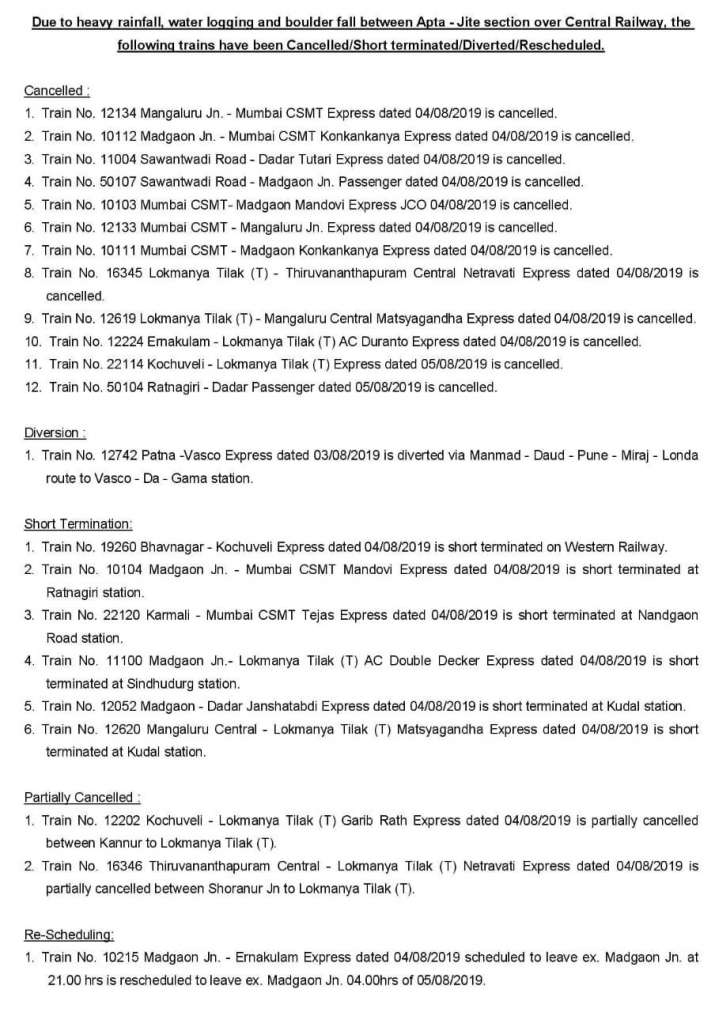 07:11 am: Passengers stranded at Lokmanya Tilak Terminus (LTT). 12 trains have been cancelled, 6 trains short terminated, 2 trains partially cancelled, and 1 each diverted and rescheduled, due to heavy rainfall, waterlogging and boulder fall between Apta-Jite section of Central Railway.

Thane and Palghar districts and Navi Mumbai town have been witnessing incessant rains since the last two days and a number of incidents of tree fall were reported from these localities, an official said.

The chronic issue of water-logging of rail tracks returned to haunt Mumbai commuters who faced hardships on the second consecutive day due to suspension of suburban services on the mainline and harbour line on Karjat and Panvel sections.

Due to the accumulation of water on tracks at a few sections, the Central Railway's services on the Main Line and Harbour Line between the Chhatrapati Shivaji Maharaj Terminus (in Mumbai) and Karjat, Kasaraand Khopoli were suspended since 8 am, its chief spokesman Sunil Udasi said.

Besides local trains, some long-distance trains like Duranto, Konark Express, Amritsar Express and Devgiri Express were stuck near Igatpuri (in Nashik district), and Aatgaon and Khardi near Kalyan, another Central Railway official said.

A Mumbai airport spokesperson on Sunday said two incoming flights were diverted and six had to make a go-around due to the heavy rains.

Due to the downpour, the Mumbai-Goa national highway was shut for road traffic due to rise in the water levels of Jagbudi and Vashishti rivers in the Konkan region. In Palghar, heavy rains led to water levels rising over the tracks in some sections, leading to the suspension of train services between Vasai and Virar towns in the morning hours, a Western Railway official said.

In Nashik district, heavy rains and release of water from Gangapur dam into the Godavari river caused a flood-like situation in some areas of the district.