Death warrant: This is how Nirbhaya convicts will be hanged

Nirbhaya case hanging: Hanging of Nirbhaya convicts has yet again been postponed, nevertheless, hangman Pawan Jallad performed a dummy execution even a day before February 1 (earlier date for execution). In India, jails follow a specific protocol, a hanging procedure at the time of executions. Here's how Nirbhaya's convicts will be treated until hanged.

Hanging of four convicts in the Nirbhaya case has yet again been postponed. Hangman Pawan Jallad had already reached the Tihar jail and several dummy executions for the convicts were performed. The convicts, all individually had filed several mercy petitions before the President. A hand-written letter by Vinay Sharma had even gone viral on social media. Convict Vinay Sharma had even drawn paintings and had written a diary, in which he had let out his grief and remorse for the December 16 Delhi gangrape and murder case.

While the convicts are making all efforts to delay the capital punishment given to them, hangman Pawan Jallad performed a dummy execution even today (Friday). Authorities at the Tihar jail had faced several challenges with respect to the hanging of Nirbhaya case convicts as the jail had not executed multiple prisoners together before. However, with dummy executions, the authorities have now overcome those.

One of the challenges is if any of the convicts fall sick or unconscious due to anxiety, the execution has to be called off. But, sources have said it is mandatory to hang all the four convicts together.

Nirbhaya case: How are prisoners treated before hanging?

In India, hangings generally take place in the wee hours of the day. In case of Nirbhaya convicts, the court had ordered to hang them till death at 6 am. The execution, anyways would be performed at Tihar jail and the jail superintendent is the one to ensure that all formalities in this regard are completed in time. But what exactly are these formalities?

- On the day of hanging, the jail superintendent wakes up the convicts nearly at 3 am. He then asks them to freshen up

According to the jail manual, other prisoners are kept locked in their cells and are not allowed to watch the execution procedure. Families and relatives of the prisoner are also not allowed to watch the execution process. The superintendent, with the approval of the government, may, however, permit social scientists, psychologists, psychiatrists who are conducting research to be present.

A guard, 10 constables, wardens, and two head constables, head wardens or an equal number from the prison Armed Guards shall be allowed to be present at every execution. A doctor is also called to the hanging site so that the prisoners may be checked after they are taken down post hanging. The doctor may also prove to be a helping hand in case a convict falls unconscious, suffers high blood pressure or anxiety ahead of his hanging. 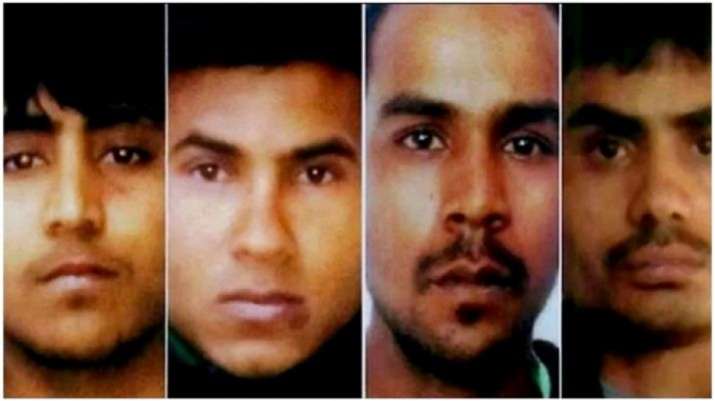 Nirbhaya case: What happens to prisoners' bodies after hanging?

In Nirbhaya case, it has yet not been decided on how the bodies of the convicts will be treated after their death. The jail manual, however, says it should be done in accordance with the requirements of the religion to which the executed prisoner belonged.

Also, if the executed prisoner’s relatives make a written application to perform the last rites, the government may, in its discretion, allow such request, provided that the relatives give an undertaking in writing that they will not make a public demonstration of any kind in relation to their cremation or burial.

The manual also says that the body of the executed prisoner shall be taken out of the prison with all solemnity.

Nirbhaya case: Why 'hang till death'?

Not many are aware about the phrase 'to be hanged till death'. Earlier, during capital punishment, the judge used to pronounce orders as 'to be hanged'. But, the rule changed after something unusual happened. There have been certain cases wherein the accused have survived the hanging. For instance, if the rope by which the person is to be hanged, tears up. In such a case, the person cannot be hanged again for that same offence.

In the 1900s during the British Raj, a man charged for an offence was rewarded capital punishment. The judge ordered the man be hanged in front of the public. As soon as the man was hanged, Nehru asked the authorities to halt the proceedings and bring the accused down. The accused man was saved. When in court, Nehru argued the punishment was 'to be hung' and the same was accomplished as soon as the man lay loose through the rope. Nehru argued that the Judge never wrote in the sentence that for how long the man was to be hung. Since the man could not be punished twice for the same offence, the accused man was free. Ever since, the words 'to be hanged till death' are used.

In case of Tihar jail, the challenges before the authorities have already been specified. In general, dummy executions are vital to prepare appropriate hanging ropes according to the weight of the convict(s). It also gives an idea of how deep the convict(s) need to be hanged. Dummy executions should be performed at least four days prior to the hanging date.

The depth of prisoners at the time of hanging is decided by their weight. According to the jail manual, prisoners under 45 kg are dropped 8 feet; those between 45 kg and 60 kg are dropped 7 feet 8 inches; up to 75 kg, 7 feet; and up to 91 kg, 6 feet 6 inches. Several measurements of the prisoner are required - like that of their neck, their height to the angle of the jaw immediately below the left ear, and the height from the drop shutter when fixed in position to the lower portion of the ring on the beam to which the rope will be affixed.

As a rule, a dummy or a bag of sand weighing 1.5 times the weight of the prisoner is hanged and dropped between 1.830 and 2.440 metres to test the rope. The length of rope for any given drop shall be the length of the drop plus the distance from the angle of the prisoner’s jaw to the ring in the beam. Wax or butter shall also be applied to the loop of the rope. The jail authorities also keep two spare hanging ropes ready in case of an accident.