Satellite image from Planet Labs, (photo above) has captured the details of the Galwan Valley, where violent clashes between India and China took left 20 Indian soldiers dead. The photo nails China's lie that claimed the Indian Army violated LAC positions.

Satellite image from Planet Labs, (photo above) has captured the details of the Galwan Valley, where violent clashes between India and China took left 20 Indian soldiers dead. The photo nails China's lie that claimed the Indian Army violated LAC positions. A closer look at the photo shows several armoured Chinese PLA trucks are lined up along the Galwan river bed in the region violating mutual agreements of disengaging and de-escalation. how Chinese

As many as 20 Indian Army soldiers have lost their lives in the clashes and has left several injured with life-threatening injuries. In the image, Chinese troops in the area can be seen vastly outnumbering the soldiers of the Indian Army. More than 200 military vehicles and several tents can still be seen in the area, and that even after the clashes had taken place.

The high-resolution satellite image taken on June 16 show a massive continuing build-up by the Chinese side despite the de-escalation agreement at the Lt Gen-level on June 6. 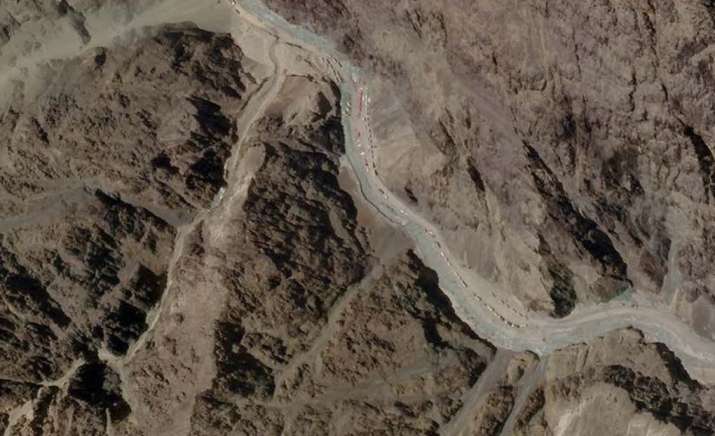 India and China have engaged in a military stand-off at multiple locations along the Sino-Indian border. On June 16, 2020, a violent clash between troops of the two countries took place near India's Patrolling Point 14 in Galwan Valley.

While the Indian Army lost 20 soldiers in the clash, unverified reports also mentioned that 43 Chinese PLA personnel were killed or severely injured.

Though Beijing has issued no official statement on the numbers of casualties the PLA suffered in the fighting, the Indian Army claims it has intercepted military communication suggesting over 40 PLA soldiers may also have been killed or injured.

The dead bodies, Indian military officials say, were handed over by the PLA on Monday morning — possibly men dragged away in the course of hand-to-hand fighting, and then killed.

Where is Galwan Valley

The Galwan River or the Galwan Valley lies to the west of China's 1956 claimed line and on the Indian side of the border in Aksai Chin. However, in 1960, China advanced its claim line to the west of the river along the mountain ridge adjoining the Shyok river valley. Meanwhile, India has continued to claim the entire Aksai Chin plateau.

To understand briefly, the Galwan River spreads along 80 kilometres and was named after Ghulam Rasool Galwan, a Ladakhi explorer from Leh, who first explored the course of the river.

The Galwan River Valley situated in the Sub Sector North (SSN) is considered a point of great strategic importance for both India and China.

Galwan Valley was one of the major areas where Chinese and Indian troops clashed in the 1962 war. In the events leading up to the conflict, the then PM Jawaharlal Nehru was convinced of the need to fortify Galwan Valley and dispatched troops accordingly. More than 300 Chinese soldiers had encircled the Gorkhas who held their ground under Naik Subedar Jung Bahadur Gurung. Since 1956, China has advanced its border claim line steadily westward more than three times, eroding Galwan’s status. However, interestingly, post-1962, there have been no military face-offs vis-a-vis the region. That is, until now. In 1962, a stand-off at Galwan was one of the biggest sparks of the Sino-Indian war.