Not only because of Super Dancer 4, but choreographer Geeta Kapur is quite popular for her social media presence. Every now and then, she shares posts and leaves fans mesmerized with her beauty. Yet again, she did the same when she shared her latest photo in a maroon outfit. However, what caught everyone's attention was the fact that Geeta was wearing vermilion (sindoor) in the pictures.

Super Dancer 4 is one of the much-loved dance shows that airs on the small screen. Not just the performances of the contestants, but the judges too are adored by the fans. One amongst those is choreographer Geeta Kapur who is well known for her motherly instinct and sweet nature. Not only because of the show, but Geeta is quite popular because of her social media activity. Every now and then, she shares posts and leaves fans mesmerized with her beauty. Yet again, she did the same when she shared her latest photo in a maroon outfit. However, what caught everyone's attention was the fact that Geeta was wearing vermilion (sindoor) in the pictures. For those unversed, sindoor is a visual indicator that a woman is married.

Geeta's pictures came as a shock to many who started asking her about her secret wedding. Even though she captioned the post, "Ready set shoot" many said that it seems she has just come out from Karwa Chauth celebrations. Her post features a couple of pictures both single and collage of Geeta posing in her marron anarkali suit along with jewels in her hand, fingers and neck.

Have a look at her stunning pictures here:

As soon as the post was made, it was filled with shocking comments from fans who wondered as to when and with whom the choreographer had her secret wedding. A fan wrote, "Maa Ki Maang Main Sindoor...Maa Ki Shaadi Kab Huyi," while another one commented, "Sindoor Kiske Naam Ka Hai Geetu Maa." 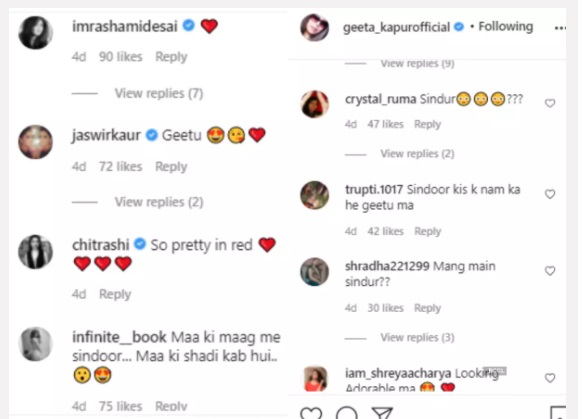 In one of the episodes of the reality show, Geeta showed everyone a folder of pictures of eligible men sent by a contestant's mother who runs a marriage bureau. She said, "Ever since the last season of Dance India Dance when it was made public that I am unmarried, it’s amazing to see viewer interest across all cities to marry me off. It is so embarrassing! Why don’t people understand that I will get married when I find the right man!

Speaking about Super Dancer 3, it is being hosted by Rithvik Dhanjani and Paritosh Tripathi and airs on Sony Entertainment Television during weekends. The show is being shot inside a bio-bubble in Daman amid the pandemic. Apart from this, Geeta will also be seen as a judge in the second season of India's Best Dancer, the online registrations of which have already begun. It will be co-judged by Terence Lewish and Malaika Arora.