Mandira Bedi recently took to her social media and dropped adorable pictures of her kids Vir and Tara.

Actress and TV host Mandira Bedi recently took to her social media and dropped adorable pictures of her kids Vir and Tara. The actress lost her husband filmmaker Raj Kaushal to a heart attack on June 30. Mandira Bedi broke gender stereotypes as she performed her husband’s last rites. Now, weeks after the shocking demise, Mandira posted a picture revealing her 'Partner in Crime.' Not just this, she even gave a glimpse of her daughter Tara showing off her muscles.

Posting a picture with Vir, Mandira introduced him as his crime partner. ''Staring the day with a walk with my partner in crime!'' she wrote. In another picture, we see Tara all dolled-up. Captioning her pose, the actress wrote "Look at those muscles missy.." 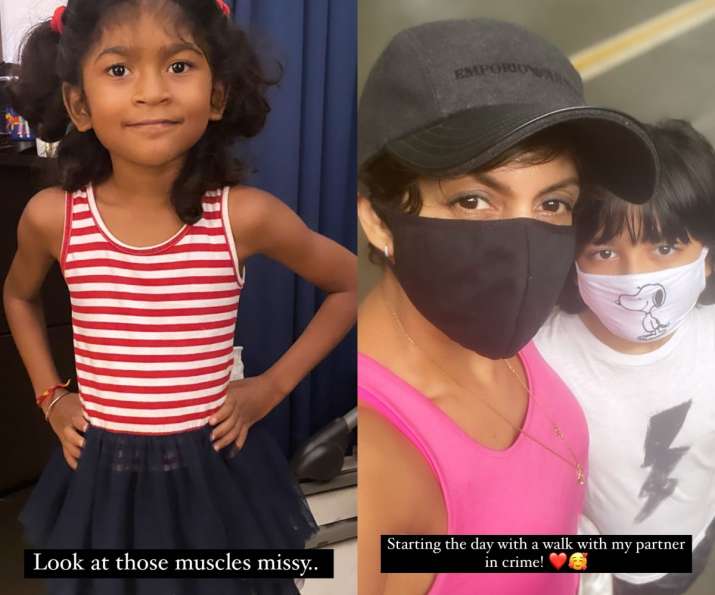 Recently, Mandira Bedi celebrated daughter Tara's 5th birthday. Mandira and her late husband had flown to Madhya Pradesh last year to welcome their adopted daughter Tara. While the actress is in mourning post her husband's demise, she did manage to make Tara's first birthday in their home, special. She took to her social media and dropped pictures from celebrations and decorations. The pictures sum up Tara's loving relationship with her new family. She posted a picture of herself and Tara with pink balloons in the backdrop.

"My little girl wasn't denied her first birthday celebration in our home," Mandira wrote. In another Story, her son Vir was all smiles for the camera as he wrapped fairy lights around him.

For the unversed, Raj Kaushal, known for directing movies like "Pyaar Mein Kabhi Kabhi" and "Shaadi Ka Laddoo", passed away following a heart attack. He is survived by his wife Mandira Bedi and their two children, son Vir and daughter Tara.  A prayer meeting was held at Mandira’s residence, which was attended by her parents and several colleagues from the entertainment industry, including actress Mouni Roy.Mandira Bedi decks up house for daughter Tara's birthday: Wasn't denied her first bday celebration in our home