After Rishi Kapoor's leaked video surfaced on the internet, several celebrities including Arjun Kapoor, Karan Wahi and Mini Mathur called out the hospital for staff negligence.

A leaked video of late actor Rishi Kapoor, as he fought for life in his last hours in the ICU, has enraged many Bollywood celebrities. In the video that has been doing the rounds of social media, intensive care unit staff can be seen sneakily recording as the veteran actor struggles. Federation of Western India Cine Employees called the video "unethical". FWICE president Ashoke Pandit took to Twitter to share picture of the complaint letter: "@fwice_mum raises protest over viral video of #RishiKapoor ji in ICU at HN hospital. The video is unethical -without permission &violates fundamental right to live with dignity-privacy of a legend who lived a glorious & dignified life& loved, regarded, held in high esteem by all," he wrote.

Reacting to such a forwarded video clip, several celebrities including Arjun Kapoor, Karan Wahi and Mini Mathur called out the hospital for staff negligence.

"Sometimes humanity and empathy must prevail over being first to embrace use of sly voyeuristic material presented to you." 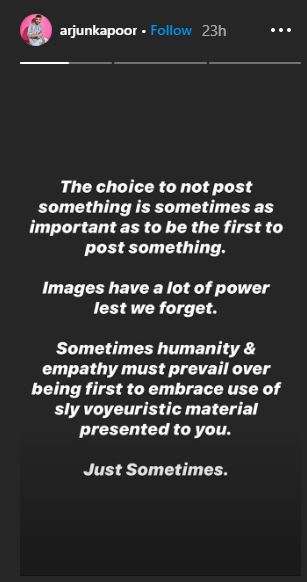 Actor Karan Wahi admitted that he too saw the video and decided to delete it immediately, rather than share it among others as he found it disturbing.

Karan said: "There's a forward that a ward boy or someone from the hospital has shot of Rishi Kapoor in his hospital just before he passed. I saw it. And think it''s a gross violation of his privacy. If you receive it, delete it rather than forward it further."

He added: "Actors are also human beings. Please do not forward or post them just to be the first one. Have some respect."

She tweeted: "Just came across a disgusting, completely invasive video of Rishi sir on WhatsApp in hospital actually titled "last video of RK" obviously shot by a hospital staff member. I know humanity is at sea at the moment but can we PLEASE STOP THIS INSENSITIVITY and not be party to this?"

"If you see a video like this on any group can you please insist that it's taken down??? Can we stop this vicarious celeb goggling even when they are indisposed and unaware? It should be a legal offence @MumbaiPolice and met with the strictest action," Mini added.

Rishi Kapoor breathed his last at HN Reliance Hospital in Mumbai on Thursday. He was battling cancer since 2018.