Bollywood actor Sushant Singh Rajput died by suicide on June 14 last year. Ahead of his first death anniversary, his girlfriend Rhea Chakraborty penned down a note sharing her her 'rheality' on strength and suffering.

Bollywood actor Sushant Singh Rajput died by suicide on June 14 last year. Ahead of his first death anniversary, his girlfriend Rhea Chakraborty penned down a note sharing her her 'rheality' on strength and suffering. Soon after Sushant's death, the late actor's father had filed a complaint against Rhea for abetment to suicide. The actress was later arrested by NCB in a drug probe and remained in jail for more than a month.

Rhea wrote, "From great suffering, comes great strength! You'll just have to trust me on this one.. Hand in there Love Rhea." She also shared the hashtag Rheality (Rhea + Reality)

Rhea Chakraborty has been missing from social media ever since Sushant Singh Rajput's death. A while ago she had shared an emotional note on the ongoing Covid pandemic and how coming are coming forward to help each other.

"It fills my heart to see how we are standing together in this crisis that will go down in history, but what really will go down in history is that the human race was divided, but in the face of adversity they united and turned into human beings again..and helped each other, lifted each other, didn’t judge, didn’t hate, fought together and won together… and just like that Humanity was restored and we saved the world. Keeping the faith With Love Rhea," she wrote. 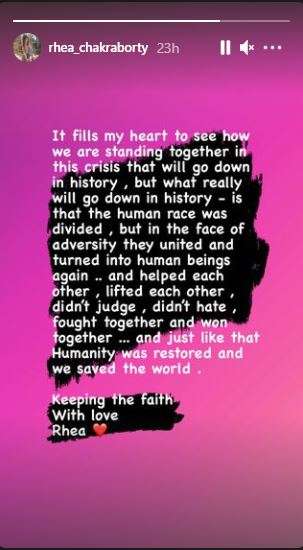 On the work front, the actress is part of the film "Chehre" starring actors Amitabh Bachchan and Emraan Hashmi. This is her first film release after Sushant's death. The actress was missing from the first poster and teaser of the film, which sparked off rumours of her being ousted from the project. However, she is part of the trailer.