Reacting to Rhea Chakraborty's emotional video message, TV actress Krisann Barretto claimed that Rhea kept Sushant away from all his friends and family members and truth will surely be out soon. Rhea's film Jalebi's actress Kajol Tyagi also said that the actress was 'oozing negativity' during the film.

Actress Rhea Chakraborty has been missing after Sushant Singh Rajput's father KK Singh filed an FIR against the actress accusing her of abetment to suicide. While Bihar police have been waiting for her to record her statement in the investigation, she released a video in which he was seen talking in a heavy voice and claiming 'truth shall prevail.' Reacting to her video, TV actress Krisann Barretto claimed that Rhea kept Sushant away from all his friends and family members and truth will surely be out soon. Rhea's film Jalebi's actress Kajol Tyagi also said that the actress was 'oozing negativity' during the film.

Krissann wrote on Instagram, "After he (Sushant) started dating this female he was not allowed to be in touch with any of us !! All of his friends !! His numbers were changed and we all know that ! We all tried reaching him but we could not! The statement from his dad says she didn’t even let him talk to his family! @rhea_chakraborty yes the truth will be out we will make sure! Satyamev jayate back at you!."

On the other hand, lauding Krissann for coming out against Rhea, her Jalebi co-star Kajol Tyagi also said that Rhea was 'oozing negativity' during the shoot of the film. She commented, "@krissannb I’m insanely proud of you for commenting I was part of jalebi before it went for the reshoot and shot with her for a couple of weeks and I remember Rhea oozing negativity. Literally. I mean in this video also keeping hands folded so that body language experts have a harder time? Well it’s evident she’s faking grief." 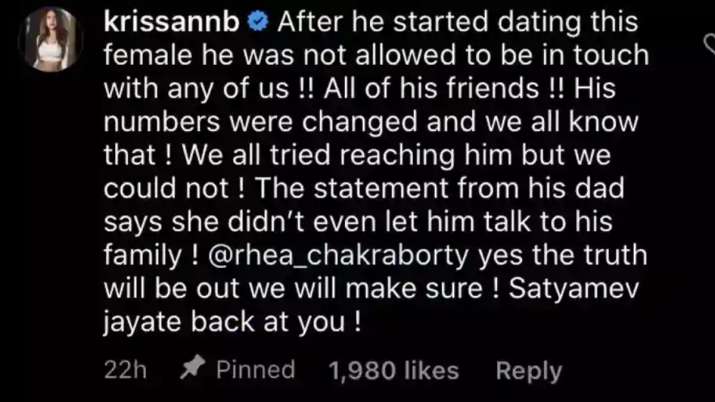 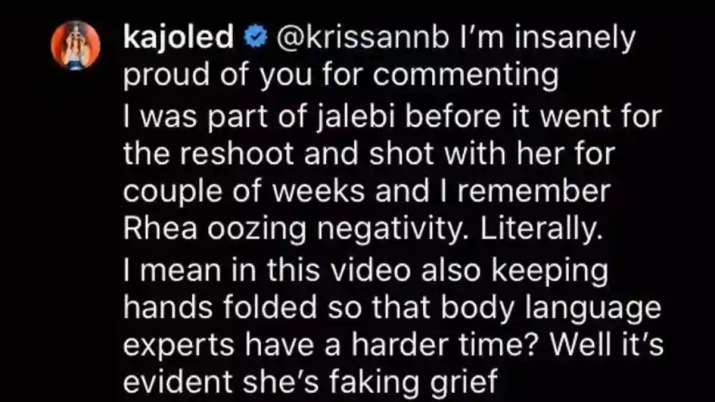 Bihar DGP Gupteshwar Pandey in an exclusive interview with IndiaTV questioned Rhea absence and said, "Why is Rhea running away? If she is not guilty, come forward and help the police in the investigation. We are not advocates of punishing an innocent. We would like her to stand up and if she succeeds in proving herself innocent, we will not even touch her. But if she runs away from us, then we will definitely doubt her."

Actor Sushant died by suicide in Mumbai on June 14 and his father K.K. Singh had lodged an FIR in Patna on July 25, in which Rhea has been named as the main accused. After the FIR was lodged in Patna, the Bihar Police have also reached Mumbai for the investigation. Meanwhile, Rhea has filed an application in the Supreme Court to hear the entire case in Mumbai instead of Patna. Sushant's father, through his lawyer Vikas Singh, has also filed a counter-petition to keep the case in Patna. The case is to be heard on August 5.