Farah Khan has shared a behind the scenes video in which Ananya Panday can be seen turning makeup artist of her daughters.

Bollywood diva Ananya Panday is currently gearing up for the release of her upcoming film Pati Patni Aur Woh. The actress, along with co-stars Kartik Aaryan and Bhumi Pednekar, finished shooting for the film earlier this month with the song Ankhiyon Se Goli Maare. The song is out on the internet and has already become a chartbuster. The actors shared many BTS video from the shoot of the song and gave their fans sneak peek into their fun banters with choreographer Farah Khan. Now, the choreographer herself has shared a behind the scenes video in which Ananya can be seen turning makeup artist of her daughters.

Filmmaker Farah Khan took to her social media to share a video in which Ananya Panday can eb seen doing makeup of her daughters Anya, Diva and their friend Myra. The video is shot by Farah as her voice can be hears from behind the camera. She says, "Valie Recital make up is been done for Diva, Anya and Myra by none other than, Ananya Panday, being laughed at by Rysa Pandey." Farah also warns the actress by the end of the video saying, "Don't be jealous and spoil the makeup of my daughters Ananya." To this Ananya said, "That's what I am doing." 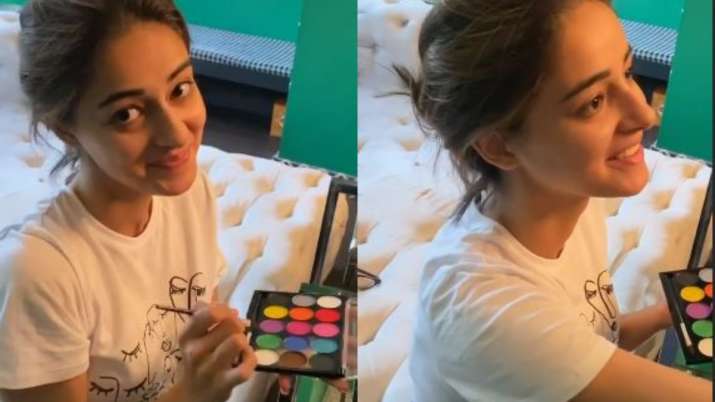 As soon as the trailer of Pati Patni Aur Woh dropped on the internet, it received flak for using ‘rape’ as a joke. Netizens even asked the makers to remove the dialogues. While the fans were confused about the double meaning jokes in the film, actress Bhumi Pednekar comnfirmed in an interview that the film is not sexist.

She said, "When I read the script, all the doubt that I had simply vanished. This film has lots of fun but, at the same time, it is not frivolous. The story is very empowering to both genders. Nobody is black or white in the story, just as in real life. I think that the maker made sure that this does not turn into a sexist, baseless film."

Directed by Mudassar Aziz and produced by Renu Ravi Chopra, Pati Patni Aur Woh is a remake of the 1978 film of the same name. Kartik Aaryan will be seen as Chintu Tyagi (Pati), Bhumi Pednekar as his Patni Vedika Tyagi and Ananya Panday will be the Woh playing Tapasya Singh. It will hit the screens on 6th December 2019.

Also read:Ananya Panday's pink dress is straight out of a Barbie movie and we are loving it!