Kartik Aaryan thinks Kriti Sanon's dress has been painted by 'Majnu Bhai' from Welcome. Here's why

Luka Chuppi actors Kartik Aaryan and Kriti Sanon's recent conversation on the actress's dress being painted by Majnu Bhai from the film Welcome is hilarious.

The coronavirus lockdown has left Bollywood celebrities stuck inside their house thinking about other creative things that they can do to pass their time. One amongst those is actress Kriti Sanon who is exploring the poetess side of herself while quarantining. Not only this, but she is also treating her fans every now and then with some beautiful pictures of herself. And the recent one she posted got the attention of her Luka Chuppi co-star Kartik Aaryan who thought that her dress was painted by Majnu Bhai.

Don't remember Majnu Bhai? For the unversed, Majnu Bhai was a character which was played by actor Anil Kapoor in Anees Bazmee’s Welcome. He was an underworld don who loved painting, one of which was sold to Mallika Sherawat in the film which also starred Katrina Kaif, Akshay Kumar, Anil Kapoor, and Nana Patekar. The painting happened to be an abstract one of a donkey atop a horse. Have a look:

Coming back to Kriti's picture, it was a collage of hers with the abstract zebra printed on her dress. She captioned the same as, "Yup I’m a thinker Sometimes.. An Over-thinker." Check it out: 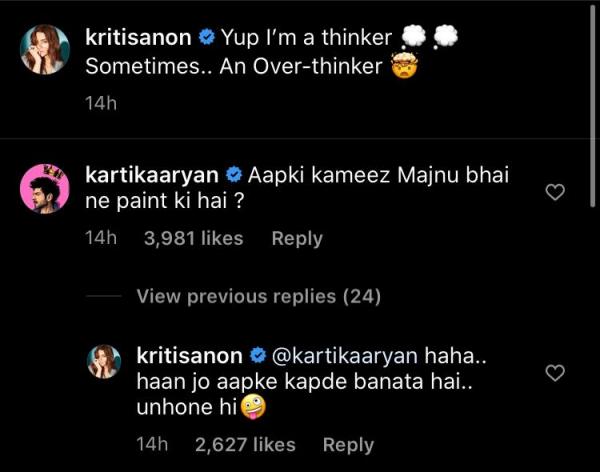 On the work front, Kartik's last film was Imtiaz Ali's Love Aaj Kal opposite Sara Ali Khan and has films like Dostana 2 and Bhool Bhulaiyaa 2 coming up next. While for Kriti who was last seen in Ashutosh Gowariker's Panipat, her upcoming projects include Mimi, Bachchan Pandey with Akshay Kumar and an untitled project with Rajkummar Rao.