Jacqueline Fernandez shared an Instagram story expressing her concern over the air pollution situation in Delhi.

Jacqueline Fernandez posted a picture on her Instagram story and expressed her concern over the growing air pollution in Delhi. Jacqueline was in the capital city and like everyone the deteriorating air quality in the city affected her. The actress shared a picture wearing an anti-pollution mask and urged people to work to resolve the problem of air pollution.

Sharing the picture Jacqueline wrote, " Back to Delhi but this time it's different. Hope we resolve this pollution crisis soon and it never gets this bad again" 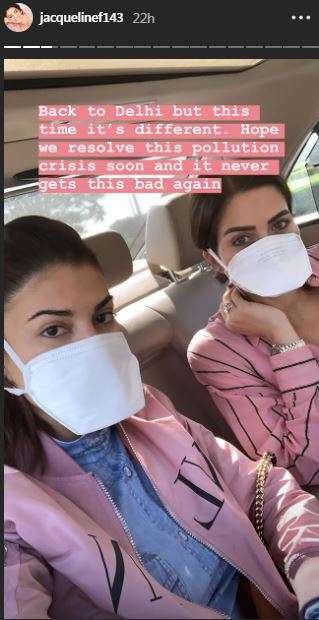 Earlier, Priyanka Chopra who was in the capital city to shoot for The White Tiger also expressed her concern over the problem of air pollution in the city.  Sharing the picture on her Instagram, Priyanka wrote, "Shoot days for #thewhitetiger. It’s so hard to shoot here right now that I can’t even imagine what it must be like to live here under these conditions. We r blessed with air purifiers and masks. Pray for the homeless. Be safe everyone. #airpollution #delhipollution #weneedsolutions #righttobreathe"

The rising air pollution in Delhi has raised alarms and measures are being taken to deal with the issue. The bad air quality forced the government to keep the schools and colleges closed. The odd-even plan was also implemented to check pollution from the car on the roads but that didn’t seem to work in the desired away.