To surprise Ali Fazal on his birthday, Richa Chadha took a flight to her hometown and paid a visit to her beau on his film sets. Taking to her Instagram, the actress posted an adorable selfie with Ali.

It's a working birthday for actor Ali Fazal, who is currently shooting for 'Khufiya' in Delhi, but his girlfriend Richa Chadha has made sure to make the day special for him. Ali has been filming in Delhi for Vishal Bhardwaj’s directorial with Tabu. To surprise him, Richa took a flight to her hometown and paid a visit to her beau on his film sets. Taking to her Instagram, the actress posted an adorable selfie with Ali. "En route to being air borne for bae, on his isspecial day," Richa captioned the post. 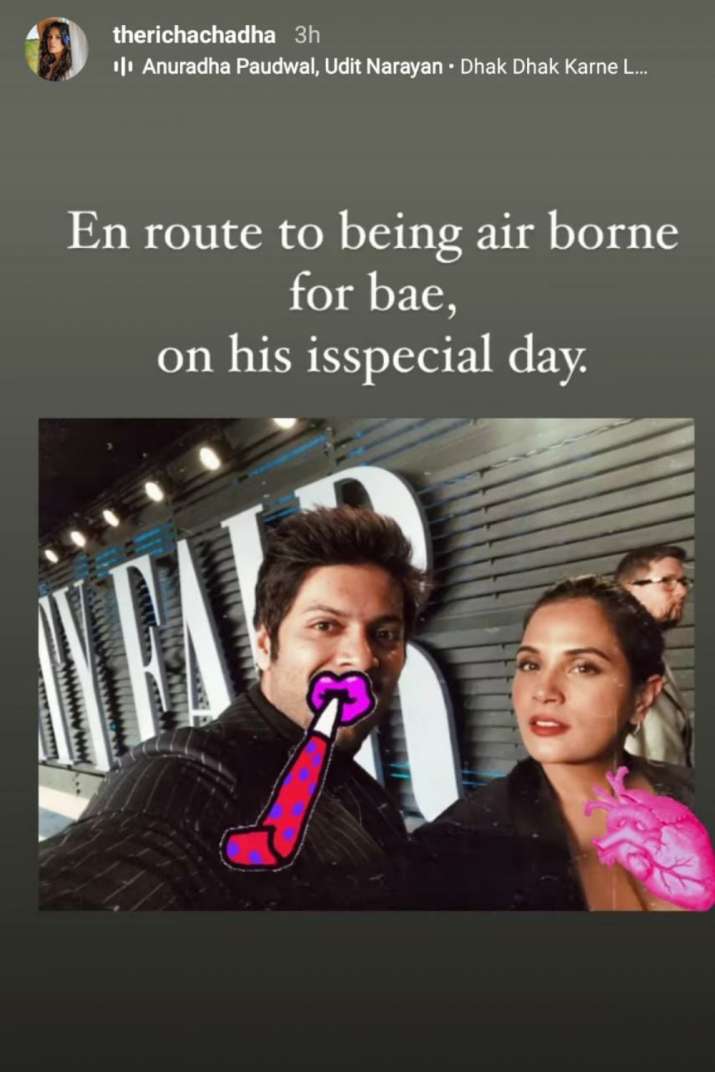 Richa and Ali have been dating for a long time now. Their love story started on the sets of the film 'Fukrey'. They planned to tie the knot in April last year, but they had to postpone their wedding due to the outbreak of COVID-19 in the country. In February, they had applied for marriage registration at a court in Mumbai.

"Currently, only the date for the registration has been taken. By process the window that is valid is for three months from the date that has been allotted. The couple are working towards an official registration in the last week of April, post which the celebrations will follow. All we can say is that it's a happy occasion and all the parties involved are elated," the spokesperson had said in a statement then.

Ever since they confirmed their relationship, the duo makes sure to treat their fans to adorable pictures of them and surprise them with their funny social media banter. Meanwhile, in March 2021, Richa and Ali announced the launch of their production house Pushing Buttons Studios. Their first film as producers, 'Girls Will Be Girls', is all set to be directed by Suchi Talati.