Deepika Padukone will be sharing screen with Ananya Panday in director Shakun Batra’s next. She took to her Instagram to share an adorable wish for Ananya’s 22nd birthday.

Bollywood's newbie Ananya Panday is ringing in her 22nd birthday today on October 30. Many people right from fans, friends to family are wishing the actress on social media. However, one of the special wish which caught our attention was of none other than Deepika Padukone.

Yes, Deepika and Ananya who are starring together in Shakun Batra's next untitled film are currently shooting in Goa. In the meanwhile, both the actresses seem to have developed a deep bonding. This was proved when Deepika shared a heartfelt note for the Student Of The Year 2 actress and called her 'baby girl'.

In her Instagram story Deepika shared an adorable picture of Ananya and in a seprarate post she wrote, "My Baby Girl, Words cannot describe the love I feel for you. And even though we've just met, I feel proud to see the smart, sensitive and witty girl you've grown into! Wishing you good health, happiness, super stardom and truck loads of biscoff my love! I love you." 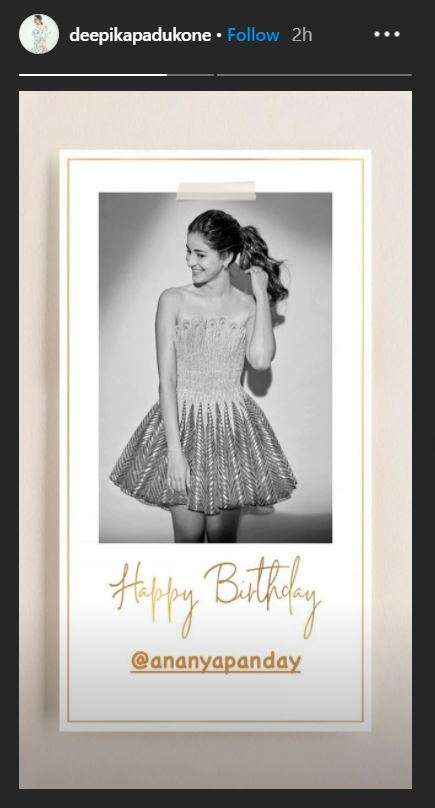 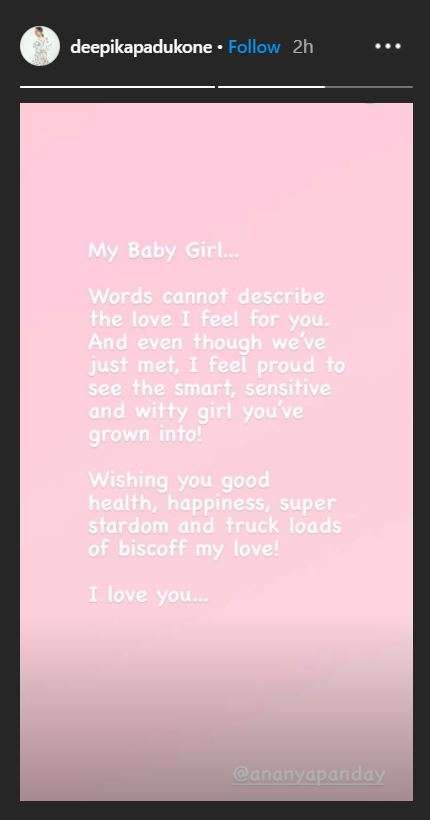 As mentioned earlier, Ananya Panday is busy shooting for her film therefore she is celebrating her birthday with the cast and crew of the film. It's the fist time Deepika and Ananya have starred together onscreen. The untitled project also stars Gully Boy fame Siddhant Chaturvedi in a key role.

Talking about Ananya, besides this film the actress will also feature in South actor Vijay Deverakonda's 'Fighter' which will be directed by Puri Jagannadh. Meanwhile, on the professional front, Deepika Padukone too has quite a few films in the pipeline like 'The Intern' which is a remake of a Hollywood film and '83' opposite her husband Ranveer Singh which is based on Indian Cricket Team's first worldcup victory.