Check out Anushka Sharma's gorgeous picture in the most stylish maternity outfit.

Mom-to-be Anushka Sharma has been quite active on social media. She always treats her fans and followers with some adorable pictures of herself with her baby bump. Her maternity diaries keep getting bigger and better with the each passing day. Anushka's latest Instagram post is just too cute to handle. The actress is expecting her first child with husband-Cricketer Virat Kohli. On Monday morning, the she posted a picture, in which she can be seen dressed in a beige outfit.

In the image, the actress is seen sitting on a sofa as she poses for the camera. Sharing the picture, Anushka captioned it: "Hey."

Soon, her post was flooded with heart emojis. Reacting to her post a fan wrote "Hello mam. Love you a lot. You are best. Can't wait for January." While another said "Hey cutie."

Earlier, heavily pregnant Anushka was spotted in town as she stepped out in style to start shooting for her brand commitments. Anushka will be shooting back to back seven days in various studios of Mumbai.

Anushka has taken every possible measure to ensure that her sets are a safe shooting venue, given her pregnancy and all the brands she is shooting with have also ensured that they are extra careful. All cast and crew members of these shoots have been tested and quarantined. 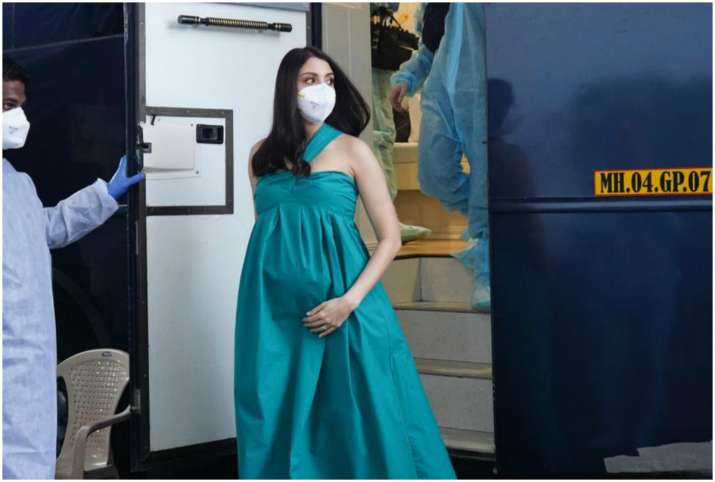 In August this year, Anushka and Virat announced the big news of their pregnancy on social media. Posting a happy picture of themselves, the couple wrote: "And then we were three. Arriving January 2021."

On the work front, Anushka Sharma was last seen in the 2018 film Zero, co-starring Shah Rukh Khan and Katrina Kaif. Her last project as a producer was the Netflix film Bulbbul while earlier this year, she also produced Amazon Prime Video's web-series Paatal Lok.