Priyanka Chopra revealed that she will be shooting for her next Bollywood film, The Sky Is Pink's last schedule at Andaman and Nicobar Islands form mid-February.

There is no denying that Priyanka Chopra is a true diva. The actress is busy promoting her upcoming Hollywood film Isn’t It Romantic? these days and after making a sizzling appearance on The Ellen DeGeneres Show, the actress made a ravishing appearance on The Jimmy Fallon Show. Priyanka looked like a million dollars in her powder-white pantsuit and also shared pictures on her social media. While fans started pouring in compliments the moment she shared her look for the show, what stole away the limelight was her mother-in-law Mama Jonas’ adorable comment.

Priyanka Chopra took to Instagram to share pictures with a caption that read, “When you pose too hard...#beforeandafte Tune into @fallontonight tonight! @jimmyfallon missed our food challenge, but there was so much to catch up on. Always the best seeing you! Theroots”. While Nick commented on the post with fire emojis, Nick Jonas’ mother Mama Jonas wrote, "Love You Daughter" and left us all go aww. Priyanka definitely looked like perfection but her mother-in-law’s comment had all eyes looking at it. Check out the comment here- 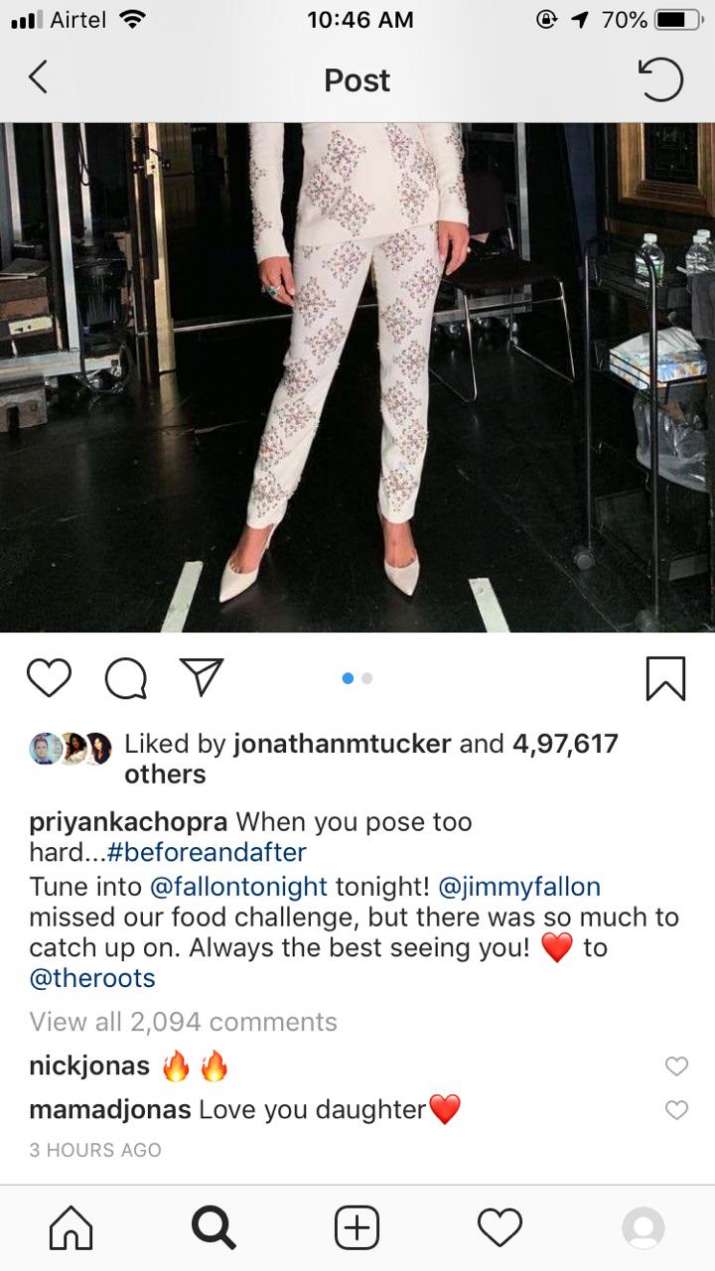 Priyanka Chopra, other than promoting her film on the show, made quite some revelations about her marriage, husband Nick Jonas and how her life changed after marriage. Talking about her husband Nick Jonas, Priyanka Chopra said, "I always wanted to add his name to mine because I feel, like, you know, we're becoming family, and I'm a little traditional and old school like that. But I don't take away my identity. He gets added to who I am."

Priyanka also revealed that she wanted to get married away from the limelight on an island but it was Nick Jonas who said that he wanted to bring her wife from the place she belonged which made her change her mind and get married in India. Looking at the wedding photo, she gushed, “He looked like a prince. He rocked that turban.” Watch the video here-

On the work front, Priyanka Chopra revealed that she will be shooting for her next Bollywood film, The Sky Is Pink's last schedule at Andaman and Nicobar Islands form mid-February. She is also writing her memoir called Unfinished that PeeCee will publish by the end of this year.