Amidst dating rumours, handsome hunk Farhan Akhtar posted an adorable picture of Shibani Dandekar wishing her on her birthday.

Bollywood actor-filmmaker Farhan Akhtar has been in the news many times for his alleged relationships. Its been a while now that dating rumours of Farhan Akhtar and popular VJ Shibani Dandekar were ruling the headlines. Now the latest picture posted by him has further given air to the fire.

Amidst dating rumours, handsome hunk Farhan Akhtar posted an adorable picture of Shibani Dandekar wishing her on her birthday. While other Bollywood celebs were celebrating Neha Dhupia’s 38th birthday last night, Farhan took to his social media to dedicated a post to rumoured girlfriend Shibani. To spice it further, he loaded the picture of Shibani smiling and eating dessert with kiss emojis. 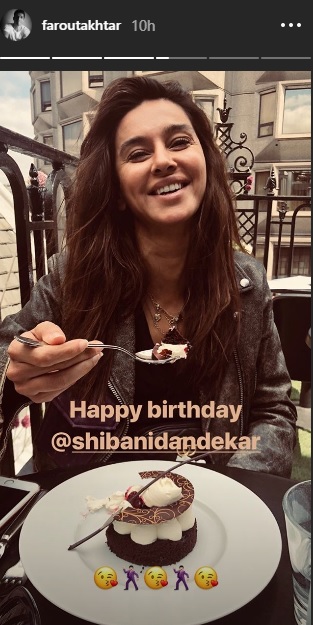 Farhan and Shibani’s link up rumours have been rife for some time, however, none of them have confirmed dating yet. On the other hand, it is learned that the duo has been spotted together many times. Farhan Akhtar was married to Adhuna Bhabani and got divorced in October 2016.

Earlier, the buzz had it that Farhan Akhtar was dating Shraddha Kapoor after getting divorced. However, Shraddha’s father and one of Bollywood’s most iconic actors Shakti Kapoor was totally against the relationship.

On the related note, Farhan Akhtar was last seen in Lucknow Central. The actor is currently shooting for his upcoming Bollywood flick The Sky is Pibk which also stars Priyanka Chopra and Zaira Wassim.