Anurag Kashyap's daughter Aaliyah celebrated her 18th birthday on Tuesday sans her father. The filmmaker is in Cape Town for work commitments.

Maverick filmmaker Anurag Kashyap’s daughter Aaliyah Kashyap has just turned 18. The young woman rang in her birthday with all her favourite people on Tuesday night. Her list of ‘favourite people’ included Sridevi’s daughter Khushi Kapoor, filmmaker Imtiaz Ali and his daughter Ida Ali. She shared the inside pictures from the close-knit party. Daddy Anurag Kashyap also took to his Instagram to share a video from the bash in which the freshly-turned 18 girl Aaliyah is trying to unscrew a champagne bottle. Her close friend Ibrahim Ali Khan (Saif Ali Khan’s son) was missing from the party.

In the video shared by Anurag Kashyap, he wrote, “Happy 18th @aaliyahkashyap . May you learn how to pop a bottle of champagne and may DaDa doesn’t have to help you. Miss you.”

At one point, Khushi Kapoor is also seen trying to help her friend pop-open the champagne bottle. Aaliyah Kashyap also shared the pictures on her Instagram story. Due to work commitments, her dad Anurag Kashyap who is in Cape Town, had to miss his daughter’s birthday.

Arti Bajaj shared the pictures of the birthday cake on her Instagram and it was perfectly suited to Aaliyah’s spirit, that’s lazy (As Anurag Kashyap has many times showed on his Instagram). In fact, a couple of days ago, the filmmaker shared a picture with his daughter in which Aaliyah was fast asleep. He wrote, “Some people just never get enough sleep Aaliyah Kashyap . On the way to her new passport... That dreaded 18 coming soon." 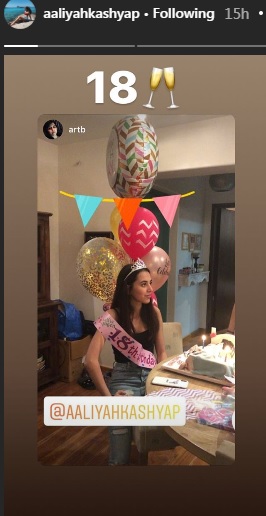 On the work front, Anurag Kashyap is currently busy filming the second season of Sacred Games.