Crazy, mad, super talented and a good guy, this is how celebrities like Anil Kapoor, Ayushmann Khurrana and Katrina Kaif among others have described Bollywood's livewire actor Ranveer Singh.

Crazy, mad, super talented and a good guy -- this is how celebrities like Anil Kapoor, Ayushmann Khurrana and Katrina Kaif among others have described Bollywood's "livewire" actor Ranveer Singh, who turned 34 on Saturday. Ranveer stepped into the glitzy world of Bollywood with the 2010 romantic comedy film Band Baaja Baaraat, and went on to entertain his fans with films like Goliyon Ki Rasleela Ram-Leela, Lootera, Gunday, Dil Dhadakne Do, Bajirao Mastani, Padmaavat, Gully Boy and Simmba. Currently, he has several films on his platter like 83 and Takht. On the occasion of his birthday, Ranveer treated his fans with his first look from 83, a film that will trace India's historic victory at the 1983 cricket World Cup. Ranveer will be playing the role of former Indian skipper Kapil Dev.

Here's what celebrities have written on their social media accounts:

Happy Birthday, Tiger 🐅 !!! @RanveerOfficial! Always keeping your eyes on the prize & not giving up until you achieve it! The do or die attitude is inspiring! Love this look! Have a great year! Lots of love! pic.twitter.com/KvJzohYVot 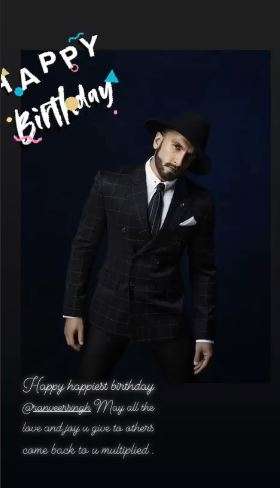 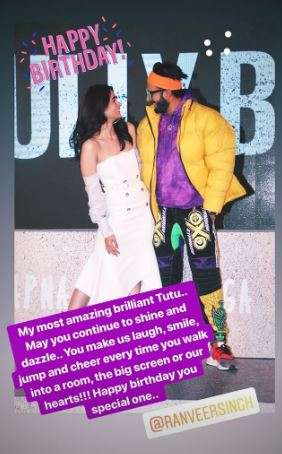 .@RanveerOfficial happiest bday!! Always inspiring people to be themselves fearlessly and to always work with passion and gratitude!! 💝💝💝 pic.twitter.com/7csgm6QpYP

A good guy is a good guy ! No amt of success changes him! N @RanveerOfficial is a good guy! Happie bday to d lootera! He is gonna win it all n with a smile :)

Happiest birthday to my fellow enthu cutlet and first hero ever! May your year be as amazing and happy as you @RanveerOfficial ♥♥♥♥♥ pic.twitter.com/WT9r7OOCwZ

Happy bday to the craziest, sweetest, coolest, most insanely talented guy ever! You deserve all the happiness and success always @RanveerOfficial .. Big love🥳🤗🎂 And your first look as the great Kapil Dev is next frikkin level👊🏼 pic.twitter.com/BOxHdPOgEM