Varun Dhawan took to social media to share a meme featuring Mithun Chakraborty, warning his fans to stay home even after there are relaxations in lockdown. As the state and central governments relax the lockdown norms and guidelines amid the COVID-19 pandemic, Varun warned his fans not to stroll outside unnecessarily.

The image is from shows Mithun’s 1998 cringe-classic Gunda. In the picture, the actor is seen hiding behind a bicycle as he aims a pistol at someone, while dodging bullets. The text on the meme says, “Lockdown khatam hone ke baad aap utne hi safe hai jitne Mihtun Da Cycle ke piche dushman ki goli se (You are as safe after lockdown as Mithun Da is from the enemy’s bullets, hiding behind this cycle).” 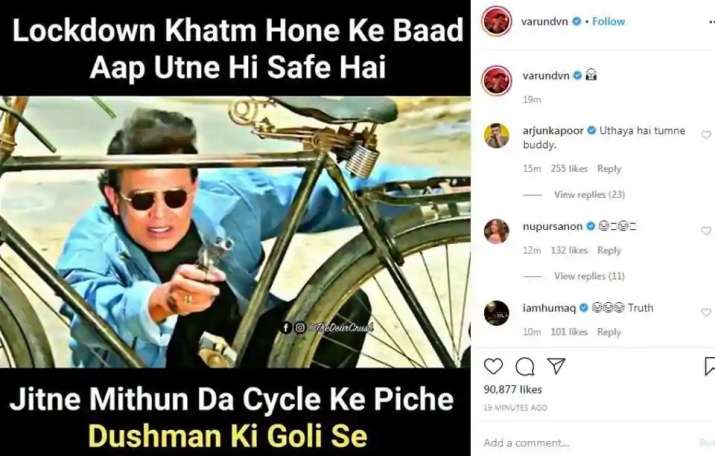 On the professional front,  Varun will next be seen in Coolie No 1, with Sara Ali Khan as the leading lady. The film is a reboot of his father David Dhawan’s 1995 blockbuster starring Govinda and Karisma Kapoor.