Mumbai: With dhol, dance and garlands, Sanjay Dutt received a hero's welcome when he arrived at his residence here on Thursday after completing his prison-term for illegal possession of arms in the March 1993 Mumbai

Mumbai: With dhol, dance and garlands, Sanjay Dutt received a hero's welcome when he arrived at his residence here on Thursday after completing his prison-term for illegal possession of arms in the March 1993 Mumbai blasts.

The son of late actors Sunil Dutt and Nargis, Sanjay was released from the Yerwada Central Jail (YCJ) in Pune. He was all smiles upon uniting with his family members, especially wife Manyata Dutt who was accompanied by their children.

Whether it was the aiport in Pune or in Mumbai, fans turned up everywhere to cheer for the actor, who is now a free man ahaving served his sentence.

His well-wishers also reached the Siddhivinayak temple, where devotees gave him a rousing welcome. 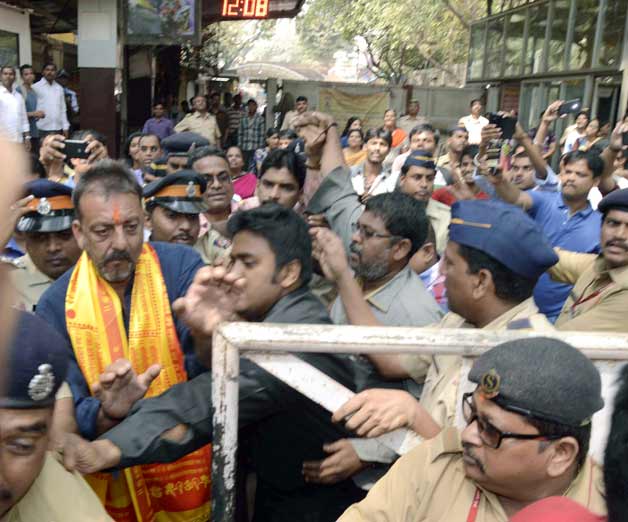 A horde of the actor's admirers also gathered outside the flower-decorated Imperial Heights building in Pali Hill here, adding to the celebratory spirit of the surroundings, which had myriad posters featuring Bollywood's beloved 'Munna Bhai'.

Fans danced to the beats of dhol outside the gate of the house of the actor, who was dressed in a blue shirt and a pair of denims.

The 56-year-old made his way to his house through a sea of fans who raised their smartphones up in the air to capture the moment. Even as the "Khalnayak" star walked amid security, the fans showered their love by decorating him with garlands. 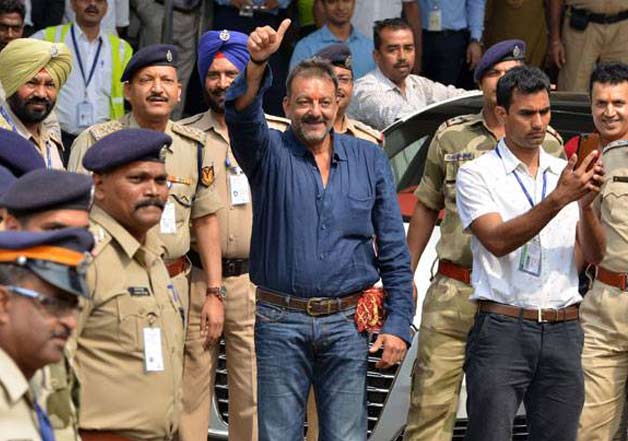 Sanjay, who was very close to his parents, also sought their blessings. Before heading home, he visited his mother's (Nargis) grave in Marine Lines here, and later at his residential building, he stood with folded hands in front of a portrait of his father, Sunil Dutt.

The actor has regaled fans with a mix of action, comedy and romantic films like "Rocky", "Hathyar", "Dushman", "Haseena Maan Jaayegi", "Vaastav: The Reality", "Munna Bhai M.B.B.S.", "Parineeta" and "Agneepath" in his over three-decade long career.

He spent 18 months in jail as an undertrial before he was granted bail and later, following a Supreme Court order in May 2013, he was sent to Yerwada Central Jail to serve the remaining 42 months of his five-year sentence.