Parents have lodged a formal complaint with the school Principal of Pathways, Noida.

A video has emerged on social media which has again raised concerns among parents about their children’s safety in schools. In the video, which has gone viral on internet, two students from Pathways Noida, are seen wherein one of them is slapping the other, and others are looking on. The slap was so hard that the student lost 25% of his hearing ability as a result. The school authorities have shrugged off the incident saying that it was not an act of bullying but a consensual peer slap bet.

The video which went viral on internet has received flak from various quarters. Though the school authorities have brushed aside from taking the responsibility of the incident by stating it as a consensual slap bet, we cannot overlook the fact that schools should keep a vigil over the activities of the children. Parents of the students who study in Pathways School have expressed their concern over the security in the school premises.

Viral Story: Michigan woman asks her boss a medical leave for mental health, his reply will blow your mind!

The incident took place inside the Pathways School, Noida premises on September 4. In the video, the student filming the entire incident can be heard saying ‘Snapchat Story’. We can make a guess that the video was being recorded for the social media app, Snapchat, where people post videos on their profile.

After the impactful slap, everyone surrounding the victim was seen laughing. The video was circulated on WhatsApp and Facebook. The father of the victim also wrote a letter to school Principal Sunanda Sandheer asking her to take an appropriate action.

“We are writing you this email in respect to the incident that took place with my son (name withheld), within the school premises and within the normal school timings, on 4.09. 2017 around 14:00 hours. The incident has been recorded on video where it can be clearly seen that few students of the school have surrounded my son, and one of them is recording the whole incident on his phone for the purpose of “snapchat story”. It can be further seen that our son is under great deal of stress and fear and is helpless for so many students have surrounded him (sic),” 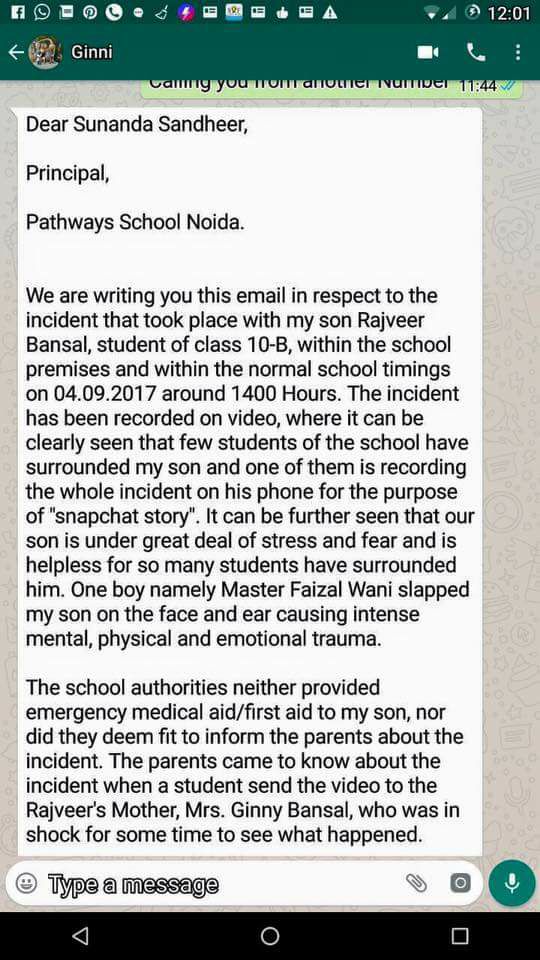 Pathways School director Dr Shalini Advani released a statement saying, “This is a rather unfortunate incident. However, this is not a bullying incident. It is the outcome of a consensual peer ‘slap bet’ episode that a few Pathways School Noida students had between themselves. Pathways School Noida has been swift in responding to the situation and has taken appropriate action with involvement of parents of the students involved.”

The father of the boy who was slapped, told HT, “He is under stress and this incident has caused us a great deal of pain. He was taken to the washroom and bullied by others. I did not file any police complaint and have sent a complaint to school for their intervention. I trust them and believe action will be taken as how my son was bullied.”

Doctors say that the victim has been left with a hole in his eardrum, which resulted in 25% hearing loss.

There could be two sides of the story. It could be a consensual slap bet or can be a case of bullying. In both the cases it reflects badly of how social media has clouded the mind of the youngsters. The consequences could have been anything, ranging from permanent deafening to some serious injury. A survey conducted by Norwegian telecom giant Telenor revealed last year that Indian schoolchildren are most vulnerable to cyber-bullying. Even if this case wasn’t of cyber-bullying, and the victim consented to get slapped, how did physical assault of that magnitude took place inside the school premises?