After Vodafone Idea and Bharti Airtel, Reliance Jio on Sunday announced new tariff plans with up to 40 percent increase in prices. The new "all-in-one" plans will come into effect from December 6, Reliance Jio said in a statement, adding that customers would now on get more benefits too.

After Vodafone Idea and Bharti Airtel, Reliance Jio on Sunday announced new tariff plans with up to 40 per cent increase in prices. The new "all-in-one" plans will come into effect from December 6, Reliance Jio said in a statment, adding that customers would now on get more benefits too.

"Jio will be introducing new 'all-in-one' plans with unlimited voice and data. These plans will have a fair usage policy for calls to other mobile networks. The new plans will be effective from 6th December 2019. Although, the new 'all-in-one' plans will be priced upto 40 per cent higher, staying true to its promise of being 'customer-first', Jio customers will get up to 300 per cent more benefits," Reliance Jio said in a statment.

Even though Reliance did not announce the exact revised price of the new plans, approximate new cost can be estimated following the trends. 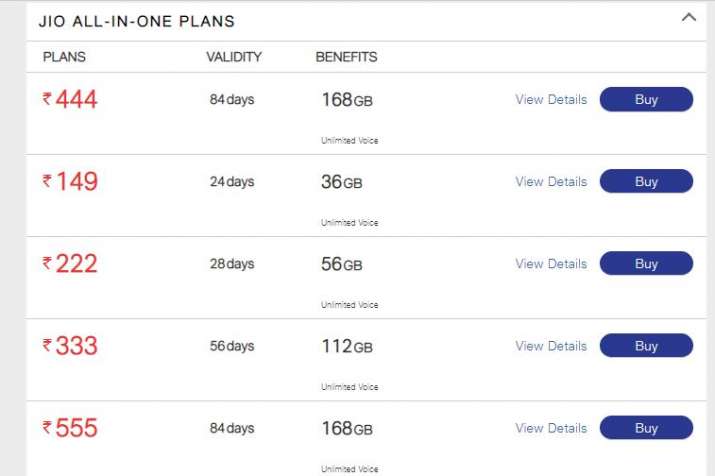 Reliance claims that it will increase the price of these plans by 40 per cent. As per this information the here are the approximate prices of the new Reliance Jio all in one plans

As per Reliance Jio the benefits to the customers will also be increased by 300 per cent. There is however no confirmation as to how this 300 per cent will be calculated.

The telecom major said that as a technology disruptor and force multiplier, Jio "acutely understands" the transformative role telecommunications and digital services are playing for the Indian economy and society and it is "determined" to strengthen the telecom sector, keep consumers at the centre of everything, benefit Indian consumers and take measures including appropriate increase in tariffs in a manner that does not adversely impact data consumption or growth in digital adoption and sustains investments.

Earlier in the day, both Vodafone Idea and Airtel announced revised tariff plans with higher prices with effect from December 3.

Also Read | Bharti Airtel to raise mobile call, data charges by up to 42% from December 3