The forecast for 2021-22 is lower than the 12.5 per cent growth in GDP that the international organization predicted in April before the second wave hit India.

The International Monetary Fund (IMF) on Tuesday slashed its economic growth forecast for India to 9.5 per cent for the fiscal year to March 31, 2022 as the onset of a severe Covid-19 wave cut into recovery momentum.

The forecast for 2021-22 is lower than the 12.5 per cent growth in GDP that the international organization predicted in April before the second wave hit India.

"Growth prospects in India have been downgraded following the severe second COVID wave during March-May and expected slow recovery in confidence from that setback," IMF said in its latest World Economic Outlook (WEO). 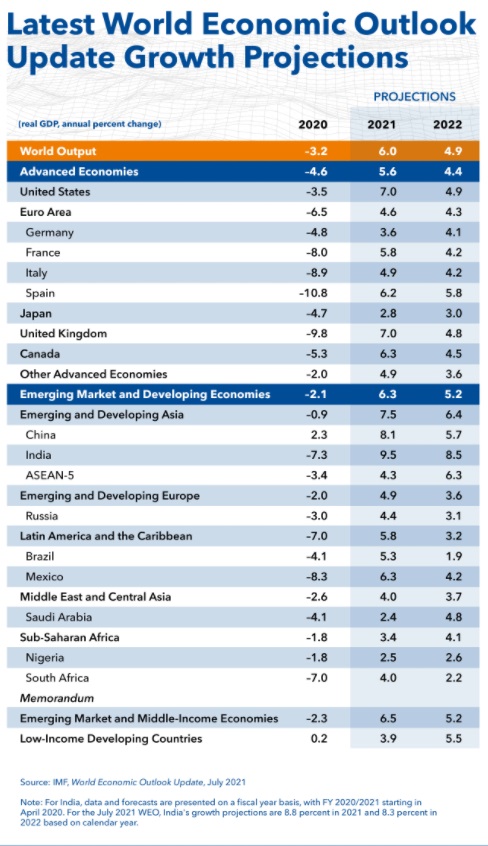 India's economy is gradually recovering from a deep contraction in the fiscal year ended March 31, 2021 (7.3 per cent) and a subsequent severe second wave of COVID-19.

Upgrading its economic outlook this year for the world's wealthy countries, especially the United States, the IMF said it expects the global economy to expand 6% this year - a dramatic bounce-back from the 3.2% contraction in the pandemic year of 2020.

The IMF's forecast, unchanged from its previous estimate in April, would mark the fastest calendar-year global growth in records dating to 1980.

The IMF expects advanced economies to grow 5.6% this year, an upgrade from the 5.1% it forecast in April, fueled by the swift recovery of consumers and businesses. But it downgraded its 2021 forecast for emerging market and developing countries to 6.3% from its April forecast of 6.7%.