As Budget Session 2020 kickstarted, Finance Minister Nirmala Sitharaman presented the Economic Survey 2019-20 in Parliament on Friday. Meanwhile, the Chief Economic Advisor Dr KV Subramanian, who prepared the Economic Survey held a press conference. The Economic Survey is a detailed reflection and retrospection into the country's economic performance over the ongoing fiscal year. The year 2019-20 has not been the best of the years for the Indian Economy. India's growth rate is at a six-year low. At a time such as this, the Economic Survey becomes all the more important. Economic Survey 2020 could hint at what changes the government could bring in its policies. The Survey will shed light on what were the major causes of the economic slowdown that the country faced in the last year.

03:18 pm: Government intervention is required when there is market failure, the market failures today are much less than they were in the 1950s or the 1980s; this should be considered while reviewing our laws.

03:14 pm: The Survey lays focus on enabling imports of components so that they can be assembled in India and then exported to create jobs

03:10 pm: There is need to bring in a distinction between hoarding and storage of food grains, this will play an important role in doubling farmers' income

03:06 pm: Peaks and troughs in business cycle phenomena show that we have hit a trough as regards economic growth, hopeful of achieving 6.0-6.5% GDP growth in 2020-21: CEA

02:50 pm: There is no better way to relate economics to the common person than by looking at the price of a plate of food paid by an Indian. Thalis have become more affordable since 2006-07: CEA

02:38 pm: India's banking system needs to grow. India has only 1 bank in the world's top 100 banks. As per the size of our economy, we should have at least 6 banks in the top 100: Krishnamurthy

02:30 pm: Economies around the world have slowed down, India has alos been impacted:  Krishnamurthy

02:26 pm: Evidence shows that the invisible hand of the market, and openness, enables growth at both aggregate and sectoral levels: CEA

Evidence shows that the invisible hand of the market, and openness, enables growth at both aggregate and sectoral levels 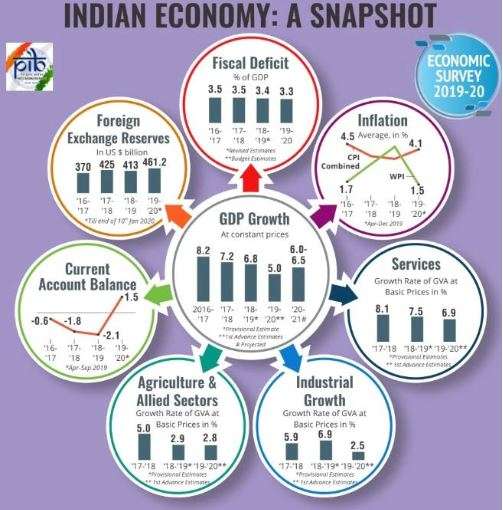 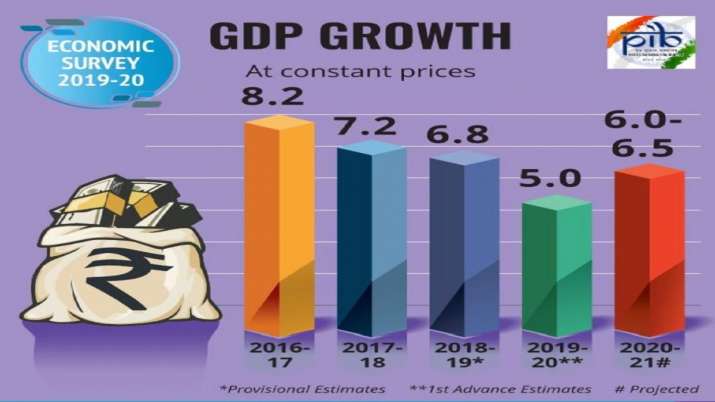 01:21 pm: The Survey this year has been printed in lavender colour - the same as the colour of the new 100 rupee currency note, the oldest currency note in circulation in the country.

01:20 pm: Weak global growth impacting India, as well as investment slowdown due to financial sector issues, had led to growth dropping to a decade low in current fiscal: Economic Survey

I am happy that the wish of the Father of the Nation Mahatma Gandhi has been fulfilled through the enactment of the Citizenship Amendment Act by both the Houses of Parliament.

11:32 am: On our request, Saudi Arabia increased Haj quota for Indian Muslims: President

On the special request of my government, Saudi Arabia increased Haj quota unprecedentedly, due to which a record 2 lakh Indian Muslims performed Haj this time. India is the first country where the entire process of Haj was done digitally and online.

11:30 am: Uproar in Parliament as President addresses amended citizenship act

My government is clearly of the view that mutual discussions and debates further strengthen democracy. At the same time, any kind of violence in the name of protest weakens the society and the country.

The abrogation of Article 370 and Article 35A of the Constitution through two-thirds majority by both the Houses of Parliament is not only historic but it has also paved the way for equal development of Jammu and Kashmir and Ladakh.

11:22 am: We built Kartarput Sahib corridor in record time: President

My government built the Kartarpur Sahib Corridor in record time, dedicated it to the nation on the occasion of 550th Prakash Parv of Guru Nanak Dev Ji.

11:17 am: Any kind of violence in the name of protest weakens society: President

My government is clearly of the view that mutual discussions and debates further strengthen democracy. At the same time, any kind of violence in the name of protest weakens the society and the country.

11:13 am: Development of J&K and Ladakh key to creating new India: President

11:10 am: Budget Session 2020 has begun. President Ram Nath Kovind is addressing the Parliament.