Realme Buds Wireless Pro offers the talked-about feature in audio -- Active Noise Cancellation -- under Rs. 5,000. Is it a good option? Read on to find out

Realme has been setting its foot in various sectors and audio is one of them. Currently, the Chinese company offers wired earphones, neckbands, and even truly wireless earbuds on a budget. For each of them comes under 5K. Since Realme aims to make budget products with good specs, it couldn’t help but add something that has been a raging trend these days -- ANC -- to its affordable audio product.

The new Realme Buds Wireless Pro and the Buds Air Pro come with Active Noise Cancellation or ANC and both fall under Rs. 5,000, making them interesting propositions. I got to use the former for a while to see how the product is like. Read on IndiaTV Tech’s review to know if the product is the one to go for ANC under 5K.

The Bluetooth-enabled Realme neckband is a successor to the Realme Buds WIreless and looks just like it. Hence, this aspect isn’t impressive, as on the outside we don’t get to see any difference. This kept aside, we get a sleek neckband, easy-to-carry, and flexible audio accessory, which calls for a convenient audio experience. The Realme Buds Wireless Pro comes in two colours: Disco Green and Party Yellow. I got the latter, which is a combination of yellow and black and a reflection of the company’s identity. 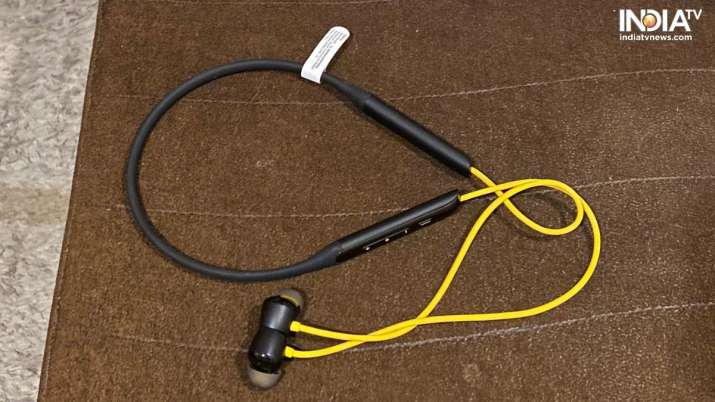 The neckband area is in black with control buttons and the Realme branding on both the ends and the yellow portion forms the wire with the earbuds. The earbuds are black but have hints of yellow. Additionally, they support the magnetic connection feature to turn off the music when they are not being used.  This can be done by connecting both the earbuds to each other just by putting them together. The neckband has a velvet touch to it, which makes it appear premium and comfortable to wear around the neck and use. 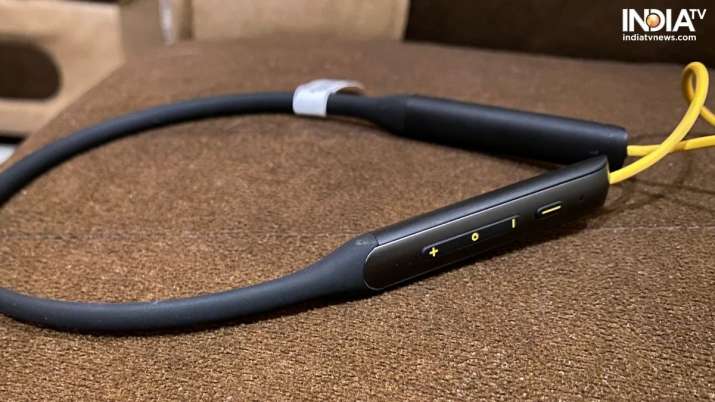 The neckband comes with a big box that contains extra ear tips, manual, and the USB Type-C cable, which is now painted in yellow. The whole Realme vibe comes packed with the audio pair and using a neckband from Realme (for the first time) proved quite comfortable. 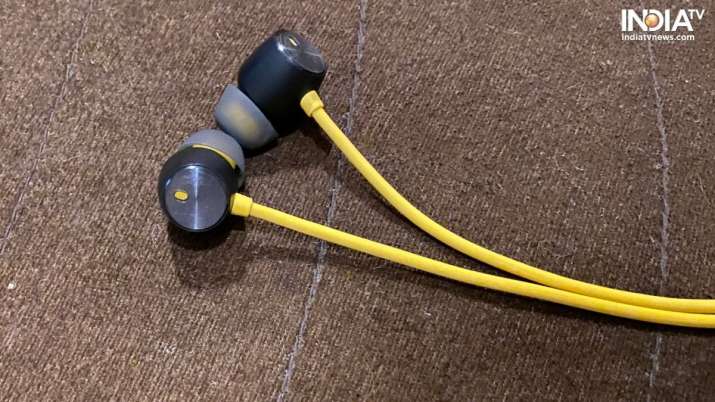 The Realme Buds Wireless Pro comes with a number of features such as Active Noise Cancellation up to 35dB, Transparency mode to listen to clear ambient sounds, and Magnetic Instant Connection to place the earbuds together and stop the music. It comes with the Realme S1 chip to calculate and cancel out noise in real-time. The chip also uses Environmental Noise Cancellation (ENC) for clear voice during calls. 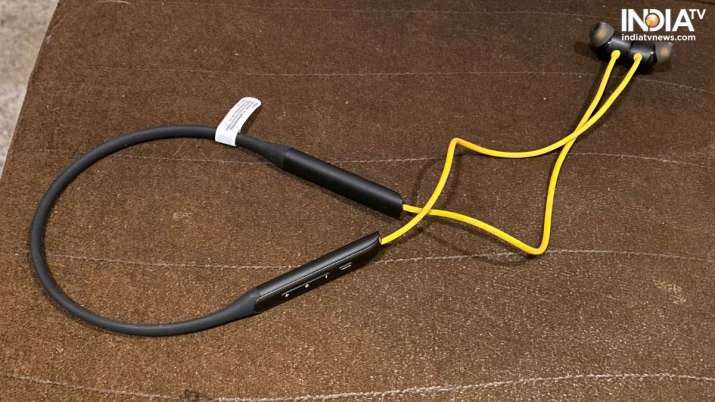 Additionally, the pair gets a 13.6mm Bass Boost Driver, Sony LDAC Hi-Res Audio, 119ms Super Low Latency, up to 22 hours of playback on a single charge and a 100 mins of playback time on a 5-minute charge. The Bluetooth-enabled neckband also gets play/pause, volume up/down, and power on/off buttons.

The new Realme audio product is Bluetooth-enabled, which makes the setup process quite obvious: turn on the Bluetooth, select the name of the device, and it gets connected. The connectivity process is not a hassle but just takes longer than expected. The wait is more visible in case of an iPhone than an Android phone. Google Fast Pair ensures easy connectivity on an Android device. This is where Realme can improve a little. However, once the first-time process is done, it never is a problem connecting afterwards. 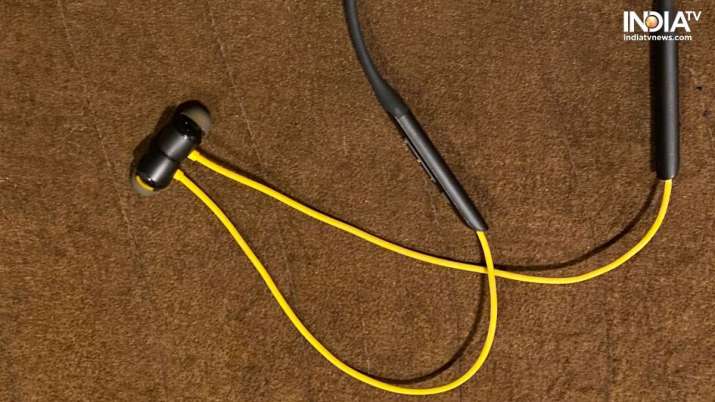 I used the Realme Buds Wireless Pro for many music genres ranging from EDM, Rock, Hindi, Hindi romantic, and Punjabi. One thing that remained constant for all the genres that the bass, while being enhanced, didn’t appear overwhelming. This is one improvement I have seen since the Realme Buds Q. Songs like ‘I Love You Baby’ felt just right. The bass was aptly highlighted and the vocals were clear. This is where I tested the Realme Link app’s Bass Booster feature and it significantly made a difference. Hence, you get a choice to opt for the bass boosting as per your preference. Once enabled, you can feel the bass has been further enhanced, which gives an extra punch to the songs. 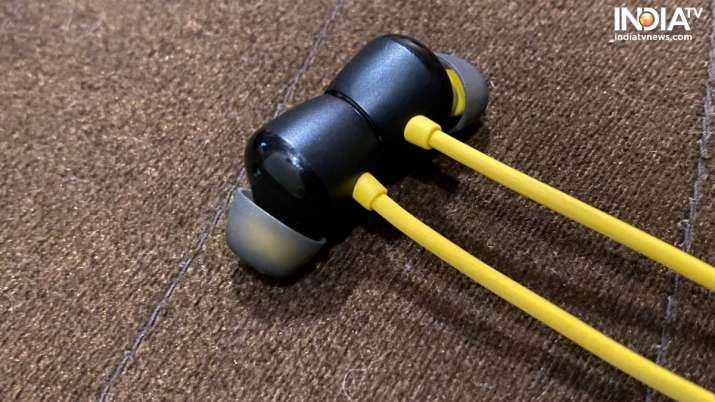 Songs such as ‘Dance Monkey’ or the Hindi ones such as ‘Uff Teri Ada’ were adequately highlighted and seemed to have a balance. The previous Realme audio products have mostly been high on bass, eventually becoming too much for the ears. But this time, the Realme Buds Wireless Pro proved to be a subtle accessory to not overdo things, in this case, bass or treble. As for ANC, which is the main highlight of the neckband, it was more than decent. It didn’t allow any outside noise to pass through my ears and ensured an interruption-free music streaming. Users can choose for the Transparent mode to disable the ANC and the medium mode (via the app) for a mild ANC feel. While the fit was comfortable, the ANC created enough pressure in my ears that disallowed me to stream music for long hours. This is one downside I faced. 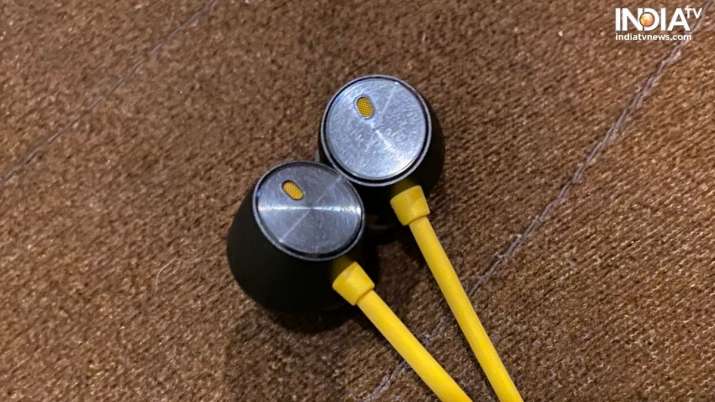 The battery was pretty good and lasted me easily for 4 to 5 days while being used for 3 to 4 hours a day. The battery lasted me longer than that if the pair was used less. The charge time was also quick, it fully charged in about an hour. The volume levels were pretty good. While listening to music on the highest volume is not advised, even if you do so with the Realme Buds Wireless Pro, it won’t be a major problem. Among others, audio quality on calls was decent and there wasn't any clarity issue.

The Realme Buds Wireless Pro, for Rs. 3999, is an option that offers comfort and more than decent audio. This is coupled with the arguably popular feature -- ANC -- that too under Rs. 5,000. While a couple of things can be improved (including the arrival of an iOS Realme Link app), the pair is a fairly decent option to consider if you want to go for an ANC-enabled one.