With the new stay at home culture, many people have been investing their time and money in PC Gaming. While many are still looking to build new PCs, others are just taking this opportunity to upgrade their old gaming rigs. However, with the shortage going on in the chipset industry, it is hard to get hold of the latest and greatest. One chip that could serve the purpose for gamers is the Intel Core i5-10600K. Intel’s  Comet Lake series is now a year old, but does it still make sense to buy the aforementioned Intel processor? Let’s find out.

The Intel Core i5-10600K processor is easily available at a reasonable price of about Rs. 20,000. Such a price tag suits the pockets of a lot of newcomers who want to keep a low budget for the CPU and blow up the rest of the cash on a great GPU. The Core i5 also sits at a sweet spot where it should not be a bottleneck for most of the affordable Nvidia RTX graphics cards.

In order to test out the Intel Core i5-10600K in 2021, I hooked it up with the Aorus Z590 Pro AX motherboard. It is a mid-range motherboard from Gigabyte which brings features like WiFi 6, Bluetooth, RGB and more to the table. I chose to go in with the Z590 instead of the Z490 just to make sure I have an upgrade path to Intel’s 11th generation Core processors.

The CPU was cooled using the Corsair H100i Elite Capellix Liquid Cooler with a 240mm radiator. This cooler was chosen in case I chose to run the 10600K overclocked. For graphics, we have the Nvidia RTX 2070 Super Founders Edition offering 8GB VRAM. All these components were housed inside a Corsair 5000D Airflow case, which was equipped with triple 120mm fans in the front as intake and a single 120mm fan at the back as exhaust. The radiator of the Corsair H100i is top-mounted to the case, with the dual 120mm fans acting as exhaust. 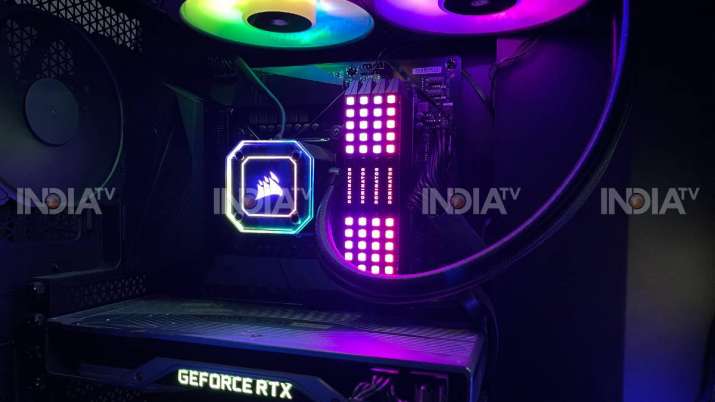 As for the RAM, I used 32GB Corsair Dominator Platinum RGB RAM clocked at 3200MHz. The dual-channel and the high frequency alongside the WD Black SN850 1TB NVMe SSD ensure there are no bottlenecks for either the CPU or the GPU.

All of this was powered by a Corsair RM1000X power supply. While the internals did not need anything more than 850W, a 1000W PSU was chosen for future-proofing.

Intel Core i5-10600K is a 6-core / 12-thread CPU with a base clock of 4.1Ghz and a single-core Turbo Boost of up to 4.8Ghz. Just like all of the other Comet Lake-S lineup, the Core i5-10600K is also based on the 14nm architecture. The processor have a TDP (thermal power design) of 125W and the company has compensated for this by thinning out the layer of silicon and accumulating a thicker heat spreader.

While running benchmarks like Blender, we did see the power draw go up to 124W. However, the TDP never jumped over 80W while gaming, which clearly shows that there is enough headroom for overclocking at least when we take real-world usage into perspective.

One thing that you would be missing out on if you go in with a 10th Gen Intel CPU is the support for PCIe Gen 4.0. This means that you will not be able to take complete advantage of new high-speed SSDs like the WD Black SN850. However, this should not really be a problem as the real-world use case will not make you wish you had PCIe Gen 4 unless you run benchmarks side by side.

As for the other specifications, the Intel Core i5-10600K is an unlocked CPU making it overclockable right out of the box. This means that tinkering around with your BIOS will unleash some additional power hidden inside your CPU. If you’re not the tinkering types, you can always just use Intel’s Extreme Tuning Utility to squeeze a little bit more performance out, without risking the CPU.

Furthermore, the Core i5-10600K comes with Intel UHD 630 Graphics, which brings support for DirectX 12 and OpenGL 4.5. If you are going to use this chip on your gaming PC, you should not even care about this part as you will anyways use an external GPU.

During our tests, the Intel Core i5-10600K was able to maintain a consistent clock speed of 4.5Ghz on all 6 cores when needed. The processor also managed to boost the clock speeds all the way up to 4.7Ghz when the applications demanded. As for the lower side, it went down till 800Mhz when the load was pulled off, but I do want to make it clear that this was not due to any thermal issues. 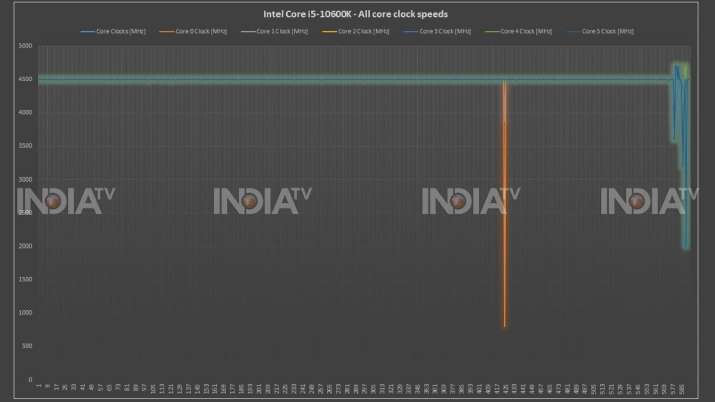 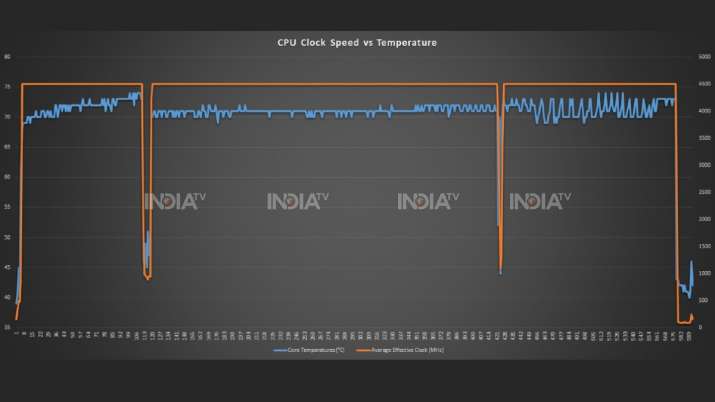 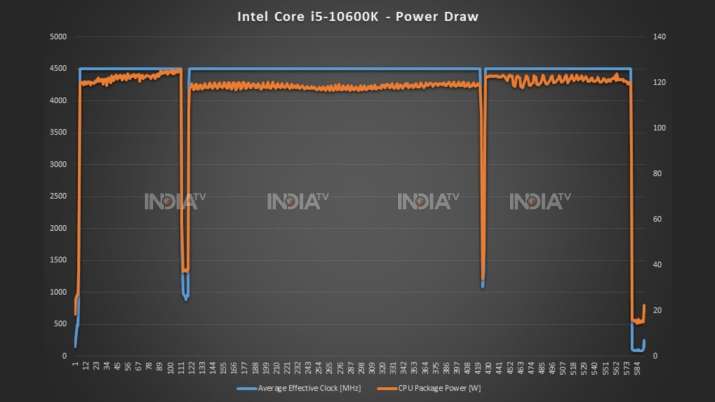 This clearly indicates that with adequate cooling, there is no chance that this processor is going to thermal throttle at least when you run it on its factory settings. Also, it is worth mentioning that all these tests were run with the Enhanced Multi-Core Performance feature turned on from the Gigabyte BIOS.

In terms of the synthetic benchmarks, the CPU was able to score 9014 points in Cinbench R23’s multi-core test. This keeps the processor right in the heels of Intel Core i9-9880H and right above the Ryzen 7 1700X. In 3D Mark’s Time Spy benchmark, the test bench was able to score 9733 and it receives a respectable 6895 on PC Mark 10. 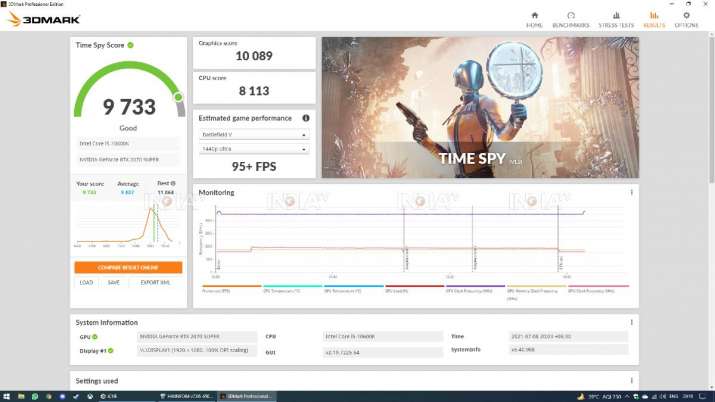 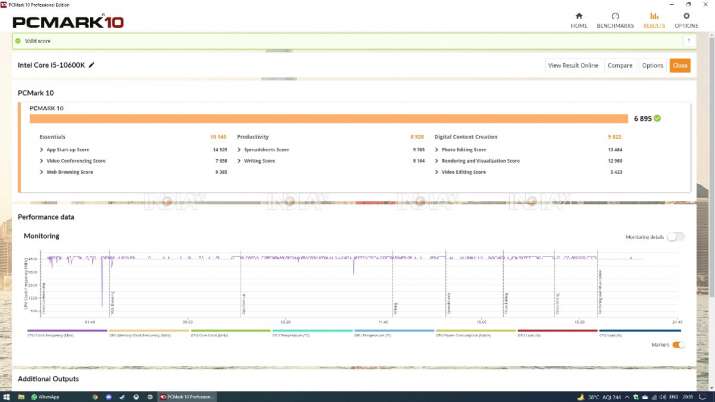 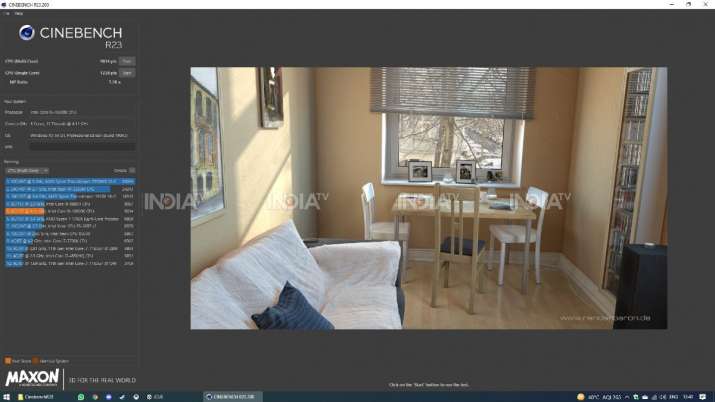 As for the temperatures, I saw a maximum of 92-degree celsius but it was only when I ran Prime95. This is nowhere close to what real-world usage scenarios are like. When paired with the Corsair H100i Elite Capellix, the CPU was idling at around 36-degree celsius. When pressurised with the sudden opening of 65 tabs on Google Chrome and copying of a large game file simultaneously, the temperature was still maintained below 67-degree celsius. Even with long hour 1440p Ultra gaming sessions, the maximum temperature recorded was around 75-degree celsius. All this testing was done at an ambient temperature between 23-26 degree Celsius.

As mentioned earlier, I used the Nvidia GeForce RTX 2070 Super alongside the Intel Core i5 10600K. Pairing up the two got me some promising results while gaming. I decided to play all the games at 1440p resolution with all the settings maxed out. 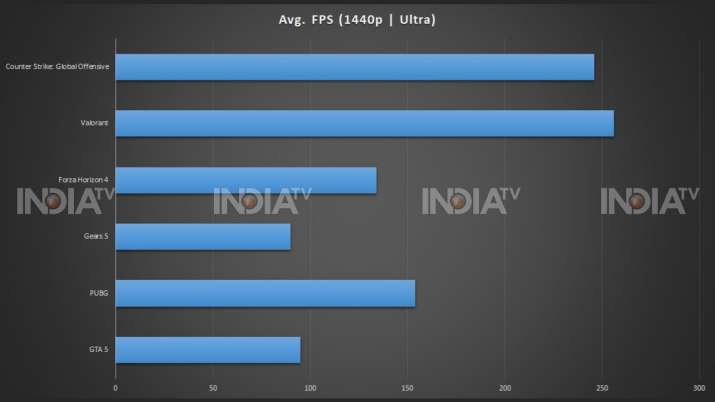 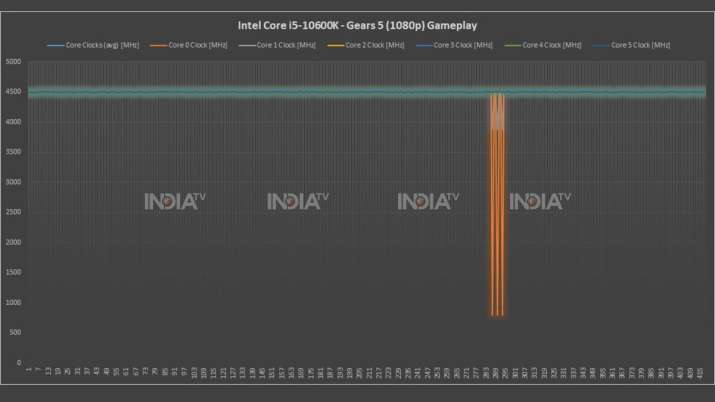 However, it is worth noting that that the average FPS that you will receive on your PC would vary on the basis of the cooling solution, the case as well as the GPU that you are using.

If you are planning to build a gaming rig that can run most of the titles at 1440p with maxed out settings, you can definitely consider the Intel Core i5-10600K. Sure, you will miss out on some features like PCIe Gen 4 but as of now, there are not many accessories that can take advantage of that. As a part of future-proofing, you can go in with a Z590 motherboard and swap your 10600K for a 11600K or a 11900K down the line.