Xiaomi is soon to launch a new smartphone in its Redmi K series under the Redmi sub-brand. Called the Redmi K30 Pro, the device has been featuring in the rumour mill for a while now. The most recent information about the new Redmi smartphone is its confirmed launch date and a number of confirmed features. Read on to know more about it.

As confirmed by Redmi via a post on the micro-blogging site Weibo, the Redmi K30 Pro will launch on March 24 in China. As a reminder, the Redmi K30, which is the K30 Pro's younger sibling, launched back in December last year.

The Redmi K30 Pro launch event will be an online one due to Coronavirus concerns.

While Redmi hasn't fully revealed information about the Redmi K30 Pro, it is still leaving out official titbits for us to get further excited about the new smartphone. According to the various teasers Redmi has been posting on Weibo, the 5G smartphone will be powered by the Qualcomm Snapdragon 865 processor.

The device will come with support for LPDDR5 RAM and UFS 3.1 storage or faster data transfer and lesser power consumption. It will come with VC Cooling technology for faster heat dissipation. Additionally, the Redmi K30 Pro will come with a quad-camera setup at the back, which could be circular in shape. The front camera could be a pop-up one. 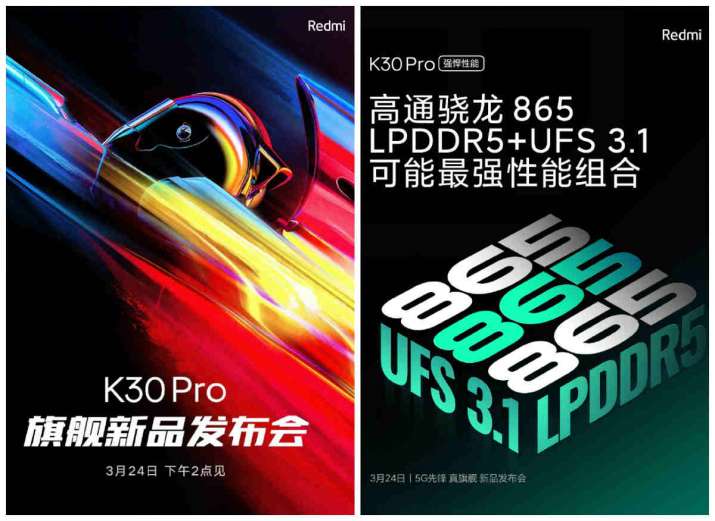 The Redmi K30 Pro is also expected to have a Zoom edition, which is likely to support 50z zooming capabilities. As for the expected features, the Redmi K30 Pro might come with  120Hz display since the K30 has one and could be backed by a 4,700mAh battery with 33W fast charging tech.

Although pricing details aren't confirmed, the Redmi K30 Pro could start at CNY 3,000 (around Rs. 31,000), becoming the first affordable device to have a Snapdragon 865 processor.

Another interesting thing about the Redmi K30 Pro is that the smartphone is the exclusive mobile partner for the Speed and Passion 9 movie in China.