New Delhi: The ICC World Cup 2015 concluded with Australian team becoming the World Champions for a record fifth time but the cricket's biggest tournament had its moments of 'controversial decisions' for which it will

New Delhi: The ICC World Cup 2015 concluded with Australian team becoming the World Champions for a record fifth time but the cricket's biggest tournament had its moments of 'controversial decisions' for which it will also be remembered.

Let's revisit some of those moments which could have gone on either way and could have resulted in a different outcome of the match.

The traditional rivals were having a face off on the opening day of the tournament at Melbourne Cricket Ground. The fans were expecting a close encounter but instead it turned out to be one sided game with Australia dominating the game completely.

However the silver lining in the match was that of the fighting innings played by England's diminutive batsman James Taylor. However due to a technical blunder committed by the on field umpire Taylor missed a deserving century in the World Cup.

James Taylor was two runs away from his first ODI century when he was given out by LBW. The batsman reviewed and the decision was reversed. But at the same time England had attempted a run, and DRS rolled on to see Glenn Maxwell running the last man James Anderson out, and Anderson was given out.

The only problem - the run-out had taken place after the lbw appeal was upheld, meaning the ball was dead so the game should have continued. A day after the incident, the ICC acknowledged that the game ended incorrectly. 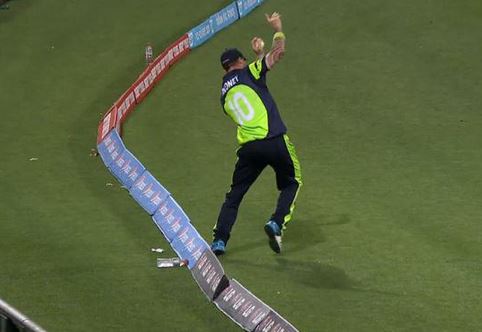 The associate nations also had its share of controversial decisons. The following incident took place in a Pool B fixture which took place between Zimbabwe and Ireland. Zimbabwe were given a target of 333 runs by the Irish and Zimbabwe were looking comfortable too win the match until a dramatic event took place.

Sean Williams who was batting on 96 hit the fifth delivery of the 47th over towards deep square-leg, where John Mooney was gaurding the boundary took the catch right at the boundary. The on-field umpires decided to take help of the TV Umpire with the decision appearing to be a tough one after several replays after Mooney's foot appeared to be touching the boundary rope.

The decision was eventually given in favour of the fielding team, as Zimbabwe collapsed to a five-run defeat. It  took an bitter  turn after a Zimbabwe newspaper published an article with the headline 'Alcoholic Mooney dumps Zimbabwe out of World Cup'.

This is the most talked about controversial decision that was given by Pakistani umpire Aleem Dar during the high Voltage quarter final match between two neighbouring countries India and Bangladesh.

Indian opener Rohit Sharma who was playing a role of sheet anchor of the Indian innings was caught in the deep at 39.4 over. Rubel Hossain attempted a yorker but missed his length. It turned into a full-toss which Rohit hit to deep mid-wicket.

A straightforward chance, safely taken but  full-toss as waist high was adjudged as'no-ball'.Later TV replays showed that it was a real touch-and-go situation which could have gone either way.

Another controversy happened in the quarter-finals between Bangladesh and India. This time it happened while Team India was fielding and India's southpaw Shikhar Dhawan took a magnificent catch to dismiss Mahmudullah. The replay however showed that as he was throwing the ball back as his weight was taking him over the ropes, before he came back to complete the catch.

However the TV replay displayed that Shikhar Dhawan's left foot might have touched the boundary line while he held the ball but the third umpire gave it out much to the amazement of the Bangladeshi fans.