England with 186 points are now third on the points table of World Test Championship, pipping New Zealand, who have earned 180 points.

England registered a comprehensive 113-run win over West Indies in the second Test match to level the three-match series 1-1. The win also helped England gaining crucial 40 points in the World Test Championship table. The Three Lions with 186 points are now third on the list pipping New Zealand, who have earned 180 points.

After a poor show in Southampton, England bounced back in the Manchester Test, with vice-captain Ben Stokes inspiring the hosts to level the series 1-1. With his magnificent 176 and unbeaten 78 in the second Test, Stokes is now second on the list of leading run-scorer in World Test Championships charts. Stokes has scored 1102 in 11 matches at an astonishing average of 61.22. He is behind Australia's latest cricket sensation Marnus Labuschagne, who is leading the pack with 1249 runs in just 9 games at an average of 83.26. Both Stokes and Labuschagne have scored four centuries in the World Test Championship.

The 'incredible' world of Ben Stokes we are living in

Meanwhile, Team India is still leading the points table with 360 points, with a healthy lead over second-placed Australia, who have 296 points. The Border-Gavaskar Trophy, later this year, will be crucial for both teams as Australia will also look to take the revenge of 2018/19 Test series humiliation, when Virat Kohli and Co. registered their first-ever series win Down Under. 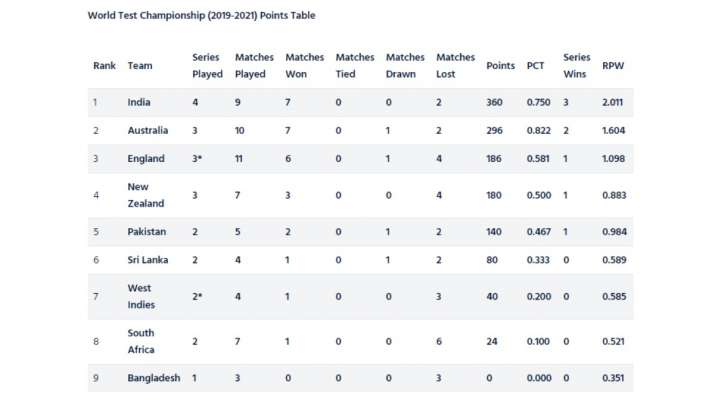 West Indies had a golden chance to tie-up with Sri Lanka on the points table, if they would have managed to register a win in Manchester. The Windies team is on the seventh spot with only 40 points.

Meanwhile, Windies skipper Jason Holder is confident of his team to bounce back in the final Test. He believes that the team is experienced enough to get back up from this defeat and challenge Joe Root and Co. in the third and final Test beginning Friday at the same venue.

"I remember we passed the bat a few times and put down chances, and we need to make sure that doesn't happen in the final Test. We are experienced enough," Holder said in the post-match presentation of the second Test.

"After a long layoff, we are getting used to the workload, and we just have to see how the bowlers pull up before the last game.

"We are here to fight, I know the guys are feeling this loss, and we'll give it everything in this last game," he added.