In this piece, we will dissect de Villiers' IPL numbers, compare them with his nomination contenders and other top-10 run-getters in IPL and prove why he indeed is the best IPL batsman ever.

On the day of the 12th anniversary of the Indian Premier League, a panel of experts on Star Sports Cricket Connected picked the 'Greatest of all time'-s from its rich 12-year-long history. While Chennai Super Kings skipper MS Dhoni was named as the GOAT captain ahead of Mumbai Indians' Rohit Sharma, who holds the record of four IPL trophies, Lasith Malinga, the leading wicket-taker in the league history, was declared as the GOAT, ahead of Kolkata Knight Riders' Sunil Narine. In the batting category, Royal Challengers Bangalore's AB de Villiers was picked as the GOAT batsman ahead of his teammate Virat Kohli, Chris Gayle, and Sunrisers Hyderabad's David Warner. And in this piece, we will dissect de Villiers' IPL numbers, compare them with his nomination contenders and other top-10 run-getters in IPL and prove why he indeed is the best IPL batsman ever.

When it comes to IPL, his name stands synonymous with Royal Challengers Bangalore. But before he came to be known as the 360-degree batsman, he had spent a three-year stint with Delhi Daredevils at the start of his IPL career, between 2008 and 2010. It was 2011 that he was roped in by RCB for INR 5 crores and has since been part of the franchise, scoring over 300-plus runs each season (barring 2017) while forming a lethal batting combination with Kohli - five 100-plus and a record two 200-plus partnerships. Overall, he is the ninth-highest run-getter in IPL history, scoring 4395 runs in 154 matches at 39.95 and a strike rate of 151.23 with three centuries and 33 fifties.

The veteran South African is primarily a middle-order batsman, arguably the tougher spot in a T20 lineup. Usually, these categories of batters are left with fewer deliveries to face or are brought in to carry or increase the scoring rate that the top-order batters have managed. And there has truly been no batsman better than de Villiers at that position and his numbers clearly support him. The graph shows that his Rotation percentage has been significantly higher than his Dot Ball percentage through the 12 years of IPL barring in 2017 when the latter had taken the higher spot in the graph. Moreover, his Boundary percentage has also shown growth over the period with 2015 and 2018 being his best years in terms of that number. The only anomaly has been the 2017 season, the year he had managed only 216 runs in nine games at just 27 and strike rate of 132.51. 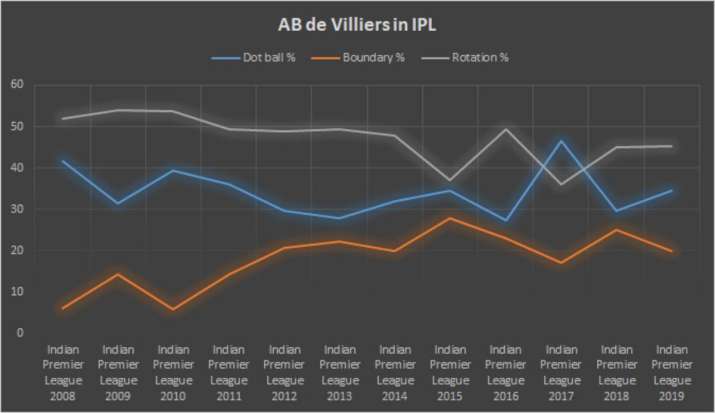 What makes AB the greatest?

De Villiers, despite being a middle-order batsman, has an impressive ability to combine high scoring rates with astounding wicket-preservation, a very rare characteristic among T20 batsman and that is mainly because higher the scoring rate, greater the aggression and hence increasing one's chances of dismissal. But de Villiers has been excellent in managing both, although only a tad higher than his former IPL teammate, Gayle.

The graph below clearly shows the average balls per wicket for IPL's top-10 run-getters, against their strike rate. And it implies that, no batsman with a higher balls-per-wicket than de Villiers' 26.42 (denote by the black spot in the scatter graph) has a better strike rate than his 151.23. Gayle stands only fractionally behind with his numbers being 27.24 and 151.02. 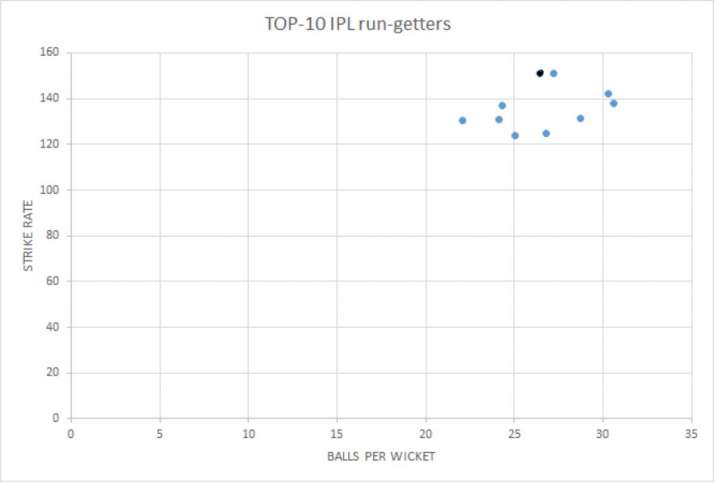 When his career IPL Dot Ball percentage is compared with the likes of the top-10 run-getters in history of the league, De Villiers' 33.14 is least followed by Dhoni while Sikhar Dhawan has the highest.

De Villiers and Gayle are the only two batters in the top-10 list to score on an average of over 9 runs per over in IPL history with the former standing only marginally ahead with 9.07 RPO. The next best on the list is Sunrisers Hyderabad captain David Warner (8.54). 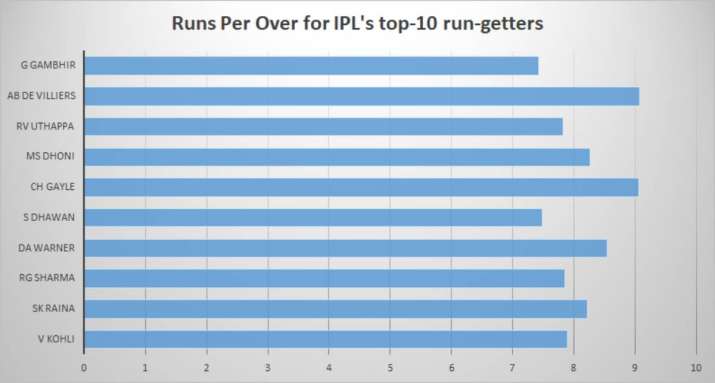 However, in terms of rotation rate, De Villiers stands slightly behind in the lot with Dhoni having the highest Rotation Rate among the top-ten run-getters followed by Kohli while Gayle has the least. 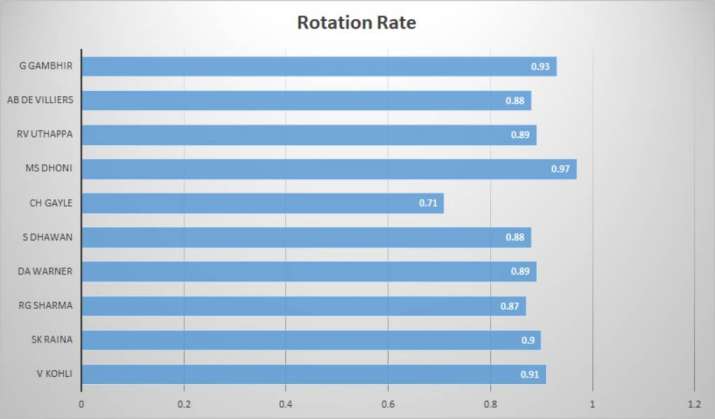 Besides these numbers, what adds to his greatness is his ability to break all norms of conventional batting and score runs all over the ground with breath-taking innovative strokes. In fact, it was the very reason that former New Zealand pacer and Star Sports expert Danny Morrison came up within selecting the RCB batsman. While admitting that it was difficult to go past Gayle, he said, "Mr. 360. If I look at that list, I'm going to go with AB de Villiers. Mr. 360, because I have seen him score all around the park, all over the IPL."