What Nitish Kumar must do in his new innings as Bihar CM: Create wealth, jobs

As Nitish Kumar returns as the chief minister of the state with India's poorest people, his game plan should be clear: Press on with policies that offer educational opportunities and further economic progress, especially jobs,

As Nitish Kumar returns as the chief minister of the state with India's poorest people, his game plan should be clear: Press on with policies that offer educational opportunities and further economic progress, especially jobs, wealth creation and infrastructure.

That appear to be the message emerging from an IndiaSpend analysis, which identifies three politically powerful administrative divisions–Patna, Tirhut and Darbhanga–being critical to the triumph of the Mahagathbandhan (Grand Alliance) in the recently concluded assembly elections.

The three divisions account for 53% (130) of the 243 legislative assembly seats, and the Grand Alliance won 68% (88) of these 130 seats. Most of these areas–with some exceptions–have witnessed some of the greatest economic progress in otherwise impoverished Bihar, the 13th largest and third most-populated state in India.

The Grand Alliance won a clear two-third majority in the assembly by winning 178 seats. All the Mahagathbandhan allies put up a credible show: the Rashtriya Janata Dal (RJD) emerged as the single largest party with 80 seats, the Janata Dal (United) won 71 seats and the Congress won 27 seats. 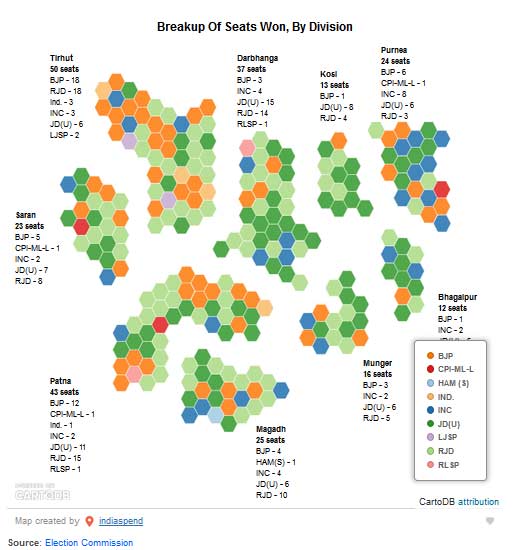 The decisive divisions for the Grand Alliance were Patna (28), Darbhanga (33), Tirhut (27) and Magadh (20). These four divisions contributed 61% of the total 178 seats won by the alliance.

Tirhut and Patna are the largest divisions, both with six districts each.  While Tirhut has a total of 50 assembly seats, Patna has 43 seats.

The BJP and the RJD emerged as the largest parties in Tirhut, each winning 18 seats.

Education, prosperity high in swathes of Bihar that Alliance won

Tirhut and Patna divisions are also key economic drivers of the state. As many as 3,133 medium, small and micro enterprises (MSMEs) were registered across Bihar in 2013-14, of which Patna accounted for 26% of these unit followed by Tirhut (17%). This is nearly 2% of all the MSMEs registered in Bihar.

Across India, 46 million MSME units provide employment to 106 million people at an average of 2.3 people per enterprise, according to KPMG Report 2015.

The Patna division in western Bihar, home to 17 million people, alone accounted for 26% of units, followed by Tirhut (17%). Patna is the largest town and headquarters of the division (Patna, Nalanda, Bhojpur, Rohtas, Buxar, and Kaimur are the districts) and is also the state capital.

Two districts in Patna division, Buxar and Bhojpur, have the most valuable agrarian tracts where net sown area is above 70%, against the state average of 60%.

The Grand Alliance was able to win 65% of seats in the Patna division. The RJD was the largest party in the division with 15 seats followed by the BJP (12) and the JDU (11).

In Darbhanga, 33 out of 37 seats were won by the Grand Alliance. The Darbhanga division is situated in north Bihar, has a population of over 12 million and is the divisional headquarters of three districts, Darbhanga, Madhubani and Samastipur.

The Darbhanga district has rich, fertile land, while Madhubani district is famous for its ancient style of painting. The district, however, is backward with little more than basic infrastructure for transport, communication and power supply. 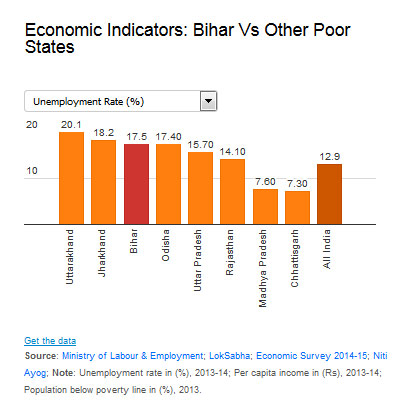 Bihar's youth in the 18-29 age group have an unemployment rate of 17.5%, third among the eight socio-economically backward states, referred to as the Empowered Action Group (EAG) states.