Numbers show US has spent $6.4 trillion on war against terror since 9/11

A recent study has revealed US' expenditure on war against terror since 9/11. During this time US is believed to have spent over $6.4 trillion to fund the war against various terror outfits across the globe. These 18 years have also resulted in 800,000 deaths.

India TV News Desk
New Delhi Updated on: November 15, 2019 8:43 IST
US has been committed to the war against terrorism ever since the Al-Qaeda orchestrated terror strike in the heart of the New York City on September 11, 2001. Recent study has shown that in this time US has spent a whopping $6.4 trillion dollars in the war against terrorism across the globe.
Cost of war research study by Watson institute of International and Public Affairs, Brown University gives a major insight into US' massive estimates expenditure in this war.
“Since late 2001, the United States has appropriated and is obligated to spend an estimated $6.4 trillion through Fiscal Year 2020 in budgetary costs related to and caused by the post-9/11 wars,” the report said.
The report further adds, " An estimated $5.4 Trillion in appropriations in current dollars and an additional minimum of $1 Trillion for US obligations to care for the veterans of these wars through the next several decades."

The expenditure includes not just the money spent by Pentagon, but also the extensive internal measures taken by the Homeland Security Department, additional defence budget like supplemental spending bills, the new 'Overseas Contingency Operations', interest paid on borrowing for said spending, US State department expenses such as USAID and medical disability care post 9/11. 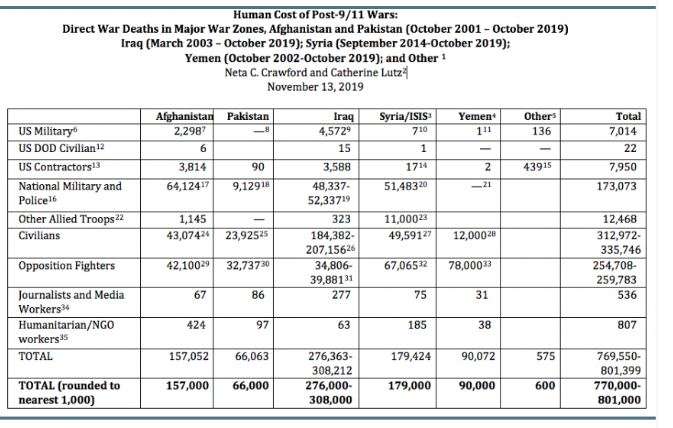 During this time 800,000 people have died in the war on terror across the globe. Most of these deaths have taken place in Iraq where the major wars were fought first against Al-Qaeda last decade and the ISIS in the 2010s. Afghanistan, Pakistan, Yemen, Syria have also seen a lot of people die in this war.