Pakistani TV anchor Kashif Abbasi's news program on Thursday was banned by Pakistan Electronic Media Regulatory Authority (Pemra) for letting a Cabinet minister to display an army boot during the talk show to ridicule the Opposition.

Pakistani TV anchor Kashif Abbasi's news programme on Thurday was banned by Pakistan Electronic Media Regulatory Authority (Pemra) for letting a Cabinet minister to display an army boot during the talk show to ridicule the Opposition.

On Tuesday night, Federal Minister for Water Resources Faisal Vawda appeared on Kashif Abbasi's programme 'Off the Record' on ARY News and used a military boot to heap scorn on the Pakistan Muslim League-Nawaz (PML-N) and Pakistan People's Party (PPP) for voting in favour of the recently passed Army Act in Parliament.

A day after the fiasco, as criticism poured in from opposition leaders as well as people on social media, Vawda said that Prime Minister Imran Khan was "not happy" over his action. While appearing in a Geo TV programme in the evening, he took responsibility of the incident but made it clear to anchor Hamid Mir that he would not apologise for bringing the boot to a live TV show. 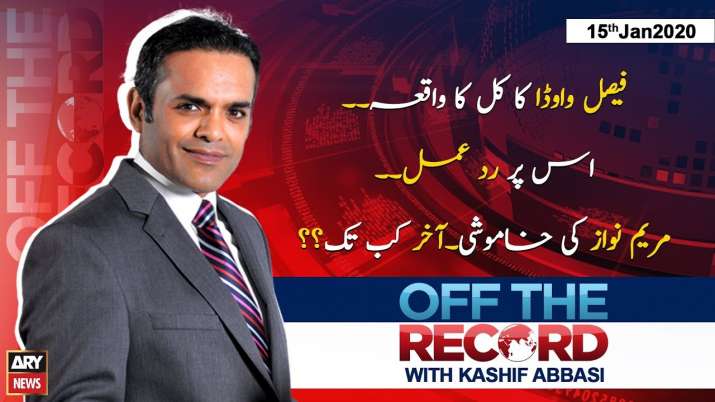 Meanwhile, Pemra banned the broadcast and rebroadcast of Abbasi's show effective from Thursday.

Senior PPP leader Qamar Zaman Kaira and PML-N leader Javed Abbasi, who were co-participants, walked out in protest as the show host just grinned and failed to stop Vawda's antics.

Taking cognizance of the incident, Pakistan Electronic Media Regulatory Authority (PEMRA) took action against the news programme and its anchor citing violation of media laws and banned Kashif Abbasi and his show Off the Record for 60 days.

PEMRA Bans programme " OFF THE RECORD" on ARY News for 60 days. pic.twitter.com/TuknaIlzWn

During the show, while responding to a question regarding Nawaz's health, Vawda said that "shameless" people stoop to any level.

"In order to save your theft and to escape the country [...] you laid down and gave respect to the boot. You have announced this," he said as he pulled out an actual boot. "In every programme, I will keep this with me, this is today's democratic N-League."

“You [the PML-N] should have given it respect earlier like we have been doing,” he said, referring to the boot he was holding.

The host, Abbasi, joked that he thought Vawda was pulling out a gun, a reference to an earlier stunt by Vawda, but in fact he had "pulled out something even more dangerous".

"You are talking against them (armed forces’ personnel) even when they embraced martyrdom. Today, when it comes to their loot and plunder Maryam Nawaz and Nawaz Sharif should hold this (the boot) and tell the people that we will respect the boot and do everything (to save us)," Vawda said. 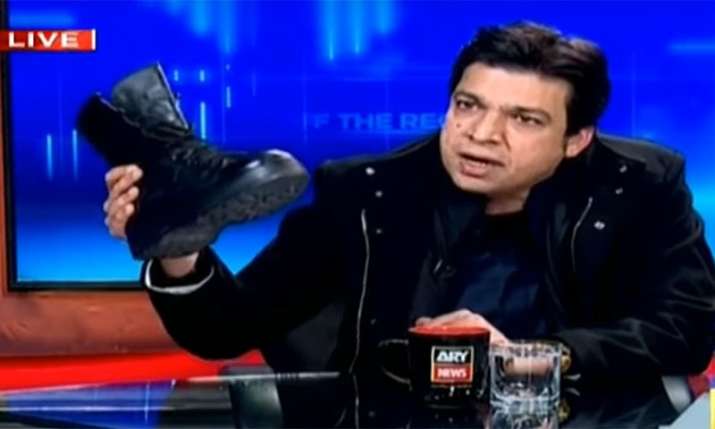 The PTI minister did not spare PPP and asked why it took back the amendments it had proposed earlier in services chiefs’ legislation.

A visibly offended Kaira said that Vawda meant that the PPP and the PML-N had voted for the Army Act not on the request of the PTI government but under the pressure of the army. Vawda clarified that this was not what he was saying.

"He came with a lot of fervour and put the boot here and created a mockery of the army," Kaira said.

At one point, Abbasi asked Vawda who the boot belonged to, to which he said: "Ask them (PPP and PML-N)". He eventually removed the boot, in response to which Kaira wryly remarked that he should leave it on the table.

Meanwhile, the opposition attack Vawda for his inappropriate behavior. PML-N spokesperson Marriyum Aurangzeb claimed Vawda had acted on Prime Minister Imran's instructions and urged the premier to seek his (Vawda's) immediate resignation from the ministry and his National Assembly seat.

In a statement issued on Thursday, Aurangzeb said: "It is the misfortune of Pakistan that people like Faisal Vawda are part of the Parliament and cabinet."