Indonesia halted a mass congregation of nearly 9,000 Muslim pilgrims and began quarantining them and checking their health Thursday to prevent the further spread of the coronavirus amid a spike in cases.

Indonesia halted a mass congregation of nearly 9,000 Muslim pilgrims and began quarantining them and checking their health Thursday to prevent the further spread of the coronavirus amid a spike in cases. The four-day gathering at a boarding school in a rural area in south Sulawesi province wasn’t approved by authorities and drew fears it could spread the virus widely in the world’s fourth most populous nation.

It was organized by a Muslim missionary movement, Jamaat Tabligh, which held a similar event in Malaysia three weeks ago that has been linked to nearly two-thirds of that country’s 900 infections as well as dozens of cases in other nations.

“We’ve worked hard in dealing with this issue, involving religious leaders and security forces. We have told the pilgrims that we are in an emergency state of coronavirus and only common discipline can break the COVID-19′s wide spread,” Abdullah said.

The move came as Indonesia reported six more deaths for a total of 25, the most in Southeast Asia, and its biggest daily jump of 82 cases to 309. 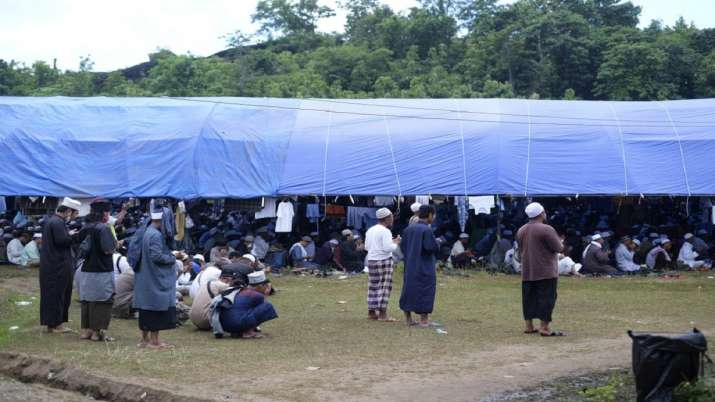 Pictures and videos posted by some participants on social media showed long rows of blue makeshift tents on a field at the school. Devotees in long white robes and skullcaps sat close to each other or slept on mats on the ground.

Sentot Abu Thoriq, a member of the organizing committee, said he regretted the government’s decision to reject the event that had been planned more than a year ago. He said those who are ill have been told to stay away, and noted that those arriving would have passed stringent health checks at the country’s airports and sea ports.

“The decision and the treatment is clearly against our faith and hurt us,” Thoriq said. “Health, illness or death is God’s destiny, we believe that God will bless and protect those who are devout.”

The committee chief later said it accepted the government’s decision for the safety of all.

The cancellation surprised some participants who arrived early Thursday.

“I didn’t know about that,” Indonesian Muhammad Sayid told Kompas TV upon arrival at a bus station in the area. “This is a very important agenda for us and has been long awaited.”

Abdullah said 411 foreigners from nine countries including Malaysia, Singapore and Saudi Arabia will be quarantined at a hotel. They will be allowed to leave later based on their ticket dates. Indonesians will be escorted to their home villages or must stay in a government dormitory, but quarantine is compulsory for 14 days once they reach home, Abdullah said. 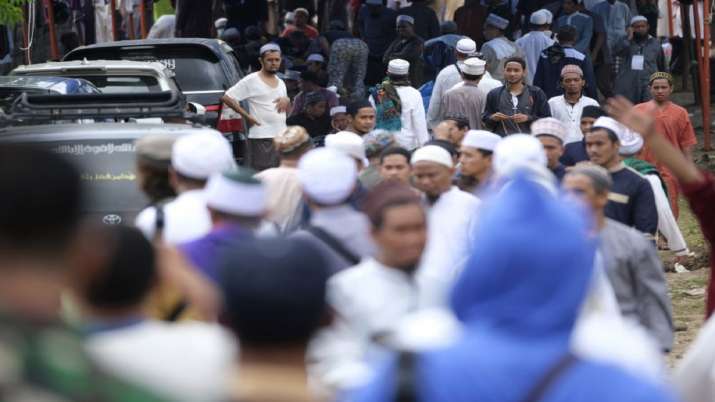 Indonesia’s swift move could help prevent an outbreak like in Malaysia, which on Wednesday sealed its borders and shut schools, businesses and government offices in a two-week lockdown. A Malaysian man who attended the mass Islamic event was among two people in the country who died.

With participants in the Malaysian event huddled together for prayers, sermons and sleeping in a confined space as well as communal eating with hands from shared trays, the virus spread unnoticed during the four-day gathering involving 16,000 people, including from the former pandemic hot spots of China and South Korea. The outbreak from the Malaysian gathering came to light nearly two weeks later when Brunei reported its first cases involving citizens who had returned from the event. People from Cambodia, Singapore, Thailand, Indonesia and Vietnam also were infected.

Indonesia’s government has been criticized as slow to deal with the virus’s spread, which could overwhelm health care system in the country of more than 267 million people.

President Joko Widodo has called for all mass gatherings to be canceled, but such orders could be hard to enforce in the sprawling archipelago.

In another large religious gathering, Catholics attended the ordination of a new bishop on Thursday in a remote town on Flores island. Organizers said about 4,000 people from across the country attended, although government officials said there were 1,000.

Images of the ceremony posted on social media showed people inside the Ruteng cathedral seated next to each other, ignoring social distancing measures. Ruteng resident Sebastian Rida said health officers asked guests to use masks and hand sanitizers but not everyone complied. Rida said he wasn’t worried about the virus threat.

“I did not think about it. I just wanted to see the new bishop,” he said.

Provincial official Marius Ardu Jelamu said the event was long planned and couldn’t be postponed, but that they tried to restrict people from attending. Cabinet ministers and other top officials also didn’t participate.

Mass religious gatherings have been curbed in many places to contain the coronavirus.

Many Muslims believe in divine protection against the pandemic. Authorities in predominantly Muslim Bangladesh are investigating an unauthorized prayer rally where about 25,000 people reportedly sought Allah’s protection.

The surprise rally Wednesday in an open field in Laxmipur district shocked many in Bangladesh, which has reported one death and 14 cases. The government shut schools and urged people to avoid public gatherings, but religious institutions, including 300,000 mosques, remain open.