Interior Ministry spokesman Najib Danish said the 18 killed included 14 foreigners and a telecommunications official from the western Farah province who was attending a conference.

A Taliban assault on the Intercontinental Hotel in Afghanistan’s capital killed at least 18 people, including 14 foreigners, and pinned security forces down for more than 13 hours before the last attacker was killed on Sunday, with the casualty toll expected to rise.

The heavily-guarded luxury hotel is popular among foreigners and Afghan officials.

Rocket lands in Indian Embassy premises in Kabul, all Indians and staff safe

Kabul hotel attack: As is happened

Interior Ministry spokesman Najib Danish said the 18 killed included 14 foreigners and a telecommunications official from the western Farah province who was attending a conference.

“11 of the 14 foreigners killed were employees of KamAir, a private Afghan airline,” said Danish. KamAir also put out an announcement saying some of their flights were disrupted because of the attack.

The Taliban claimed the attack, which began around 9 pm Saturday, saying five gunmen armed with suicide vests targeted foreigners and Afghan officials. Taliban spokesman Zabihullah Mujahid said the insurgents initially planned to attack the hotel Thursday night but postponed the assault because there was a wedding underway and they wanted to avoid civilian casualties.

The attack unfolded almost six years after Taliban insurgents launched a similar assault on the property, which is not part of the Intercontinental chain of worldwide hotels.

The Interior Ministry said a private firm assumed responsibility for securing the hotel around three weeks ago. The ministry says it is investigating how the attackers managed to enter the building.

During a press conference, Danish said that early investigations show that six insurgents entered the hotel from the northern side and stormed its kitchen. Two attackers were killed by Special Forces on the 6th floor of the hotel.

“We need to complete our investigation, but our initial reports show that the attackers were moved in to the hotel,” said Danish.

Mumtaz Ahmad, a provincial telecommunication employee for Helmand province who survivor the attack said “I was on my way from my room toward the reception, when I the elevator door opened, I saw two-armed suicide bombers. People were escaping and the attackers were firing at them.”

Afghan security officials confirmed that 34 provincial officials were gathered at the hotel to participate in a conference organized by the Telecommunication Ministry. 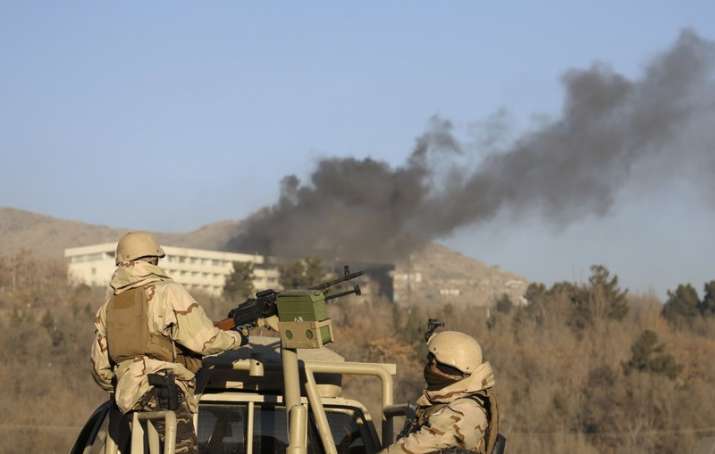 A fire broke out at the hotel as the fighting raged, and the sound of explosions could be heard throughout the standoff. Live TV footage showed people trying to escape through windows on the upper stories.

Capt. Tom Gresback, spokesman for NATO-led forces, said in a statement that Afghan forces were leading the response efforts. He said that according to initial reports, no foreign troops were hurt in the attack.

Neighboring Pakistan condemned the “brutal terrorist attack” and called for greater cooperation against militants. Afghanistan and Pakistan routinely accuse each other of failing to combat extremists along their long and porous border.

Afghan forces have struggled to combat the Taliban since the U.S. and NATO formally concluded their combat mission at the end of 2014. They have also had to contend with a growing Islamic State affiliate that has carried out a number of massive attacks in recent years.

In the northern Balkh province, insurgents burst into a home where several members of a local pro-government militia were gathered late Saturday, leading them outside and killing 18 of them, said Gen. Abdul Razeq Qaderi, the deputy provincial police chief. Among those killed was a tribal leader who served as the local police commander, he said.

The Taliban claimed both attacks.

In the western Herat province, a roadside bomb struck a vehicle carrying 13 civilians, killing all but one of them, said Abdul Ahad Walizada, a spokesman for the provincial police chief. No one immediately claimed the attack, but Walizada blamed Taliban insurgents, who often plant roadside bombs to target Afghan security forces.