Donald Trump wants 'us to fear the future': Hillary Clinton

On the final day of the Democratic National Convention today, Hillary Clinton accepted the party’s nomination for November presidential election.

On the final day of the Democratic National Convention today, Hillary Clinton accepted the party’s nomination for November presidential election. The former first lady, senator and secretary of state came on stage to accept her party's nomination as president of the United States. The crowd waved American flags as she emerged from the center of the stage.

Clinton opened by thanking her supporters and thanking her husband and everyone who endorsed her during the convention, including President Obama, Vice President Joe Biden and her rival during the primaries, Sen. Bernie Sanders.

Addressing the crowd, Clinton said that "she accepts the Democratic presidential nomination with humility, determination and boundless confidence in America's promise".

"It is with humility, determination and boundless confidence in America's promise that I accept your nomination for President of the United States. Your cause is our cause," Clinton said to thunderous applause at the Wells Fargo Centre in Philadelphia.

Clinton said that she'd be an inclusive president and she wouldn't build a wall or ban a religion.

The Democratic nominee said that she'd try to build an economy that benefits everyone and she'd work toward a path to citizenship for millions of immigrants.

"We are clear-eyed about what our country is up against. But we are not afraid," she said.

Attacking her Republican rival Donald Trump, she said that he has brought the Republican Party a long way — from "Morning in America" to "Midnight in America." 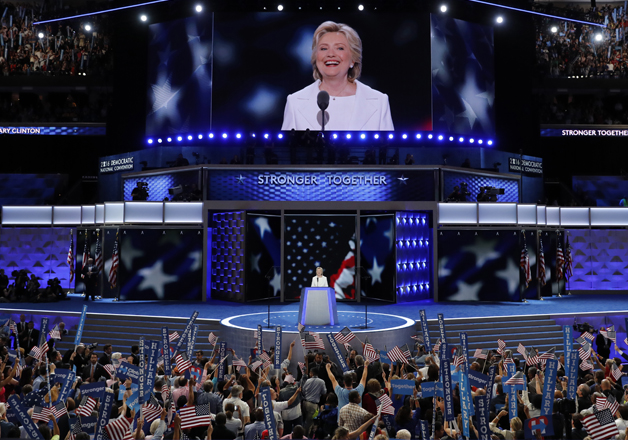 “Trump wants us to fear the future and fear each other,” she said.

"We heard Donald Trump's answer last week at his convention. He wants to divide us — from the rest of the world, and from each other," she added.

‘A country that works for everyone’

The former First Lady also said she would penalise corporations that send jobs abroad and hit out at Trump for having some of his products manufactured abroad, mentioning picture frames made in India.

At the same time she promised stern against terrorism, but by working with allies. Clinton said she would strike the Islamic State (IS) terror group from the air and and empower allies to defeat them, while countering its appeal to youth.

She invoked the commitment of Humayun Khan, a 27-year-old Pakistani American Army captain, killed in 2004 in Iraq trying to save his soldiers, and Nat Kaine, the Marine son of her Vice President nominee, Tim Kaine, to protect the US to declare her commitment the armed forces and to keeping the nation safe.

Philadelphia was where the US Independence Declaration was signed 240 years ago. From the Convention in the city, the party and the nation should message of unity, liberty and equality enshrined in it, she said.

Clinton promised to work to bring jobs, penalise corporations that hurt workers, and improve the life of the citizens. She said she would work along with the Republican Party to make the biggest investments since the Second World War to create jobs.

Clinton said that she would appoint Supreme Court judges who would overturn judgments that allowed some types of political donations and, if necessary, introduce a constitutional amendment.

Wall Street will not be allowed to wreck Main Street. Corporations, Wall Street and the rich will be made to pay more taxes,” she said, outlining her populist agenda.

Overcoming an early party leadership crisis and the persistent vociferous opposition to her from the supporters of insurgent rival, Sanders, the Convention ended generally on an upbeat note.

In a political coup to tamp down dissent and build unity for the party, Sanders on Tuesday night asked the convention to discard the votes cast for him and nominate Clinton unanimously by acclamation.

Pockets of resistance persisted with the Sanderistas - the supporters of Sanders - booing her speech.

On Wednesday, President Barack Obama addressed the Convention and gave her a resounding endorsement and declared Clinton the leader to pick up the baton and give the nation continuity and strong leadership.

For the Convention's finale, Chelsea Clinton introduced her mother extolling her commitment to public service and the values of compassion for the less fortunate she instilled. She said Hillary Clinton keeps going amid the sound and fury of politics despite setbacks because of her commitment. 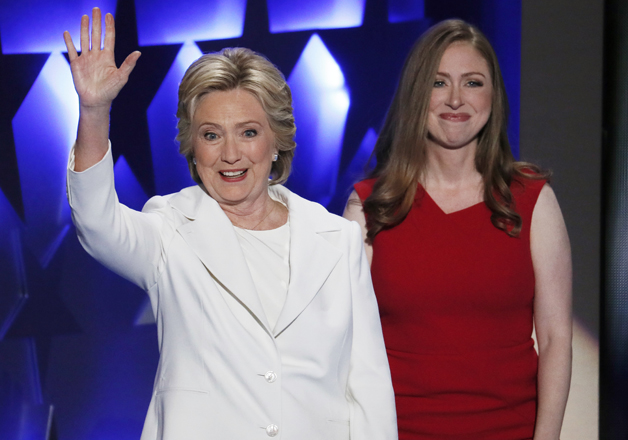 Patriotism was the theme of one of the last segments of the Convention showing support of military veterans, placards with "USA" shouts of "USA, USA" by the audience and a show of cards by participants to spell out a patriotic theme.

The four-day convention began on an uneasy note with the party chair Debbie Wasserman Schultz resigning after WikiLeaks revealed emails by party leaders strategising to undermine Sanders, who is Jewish by portraying him as an atheist, and a vociferous revolt by his supporters.

The scenario changed on the second day, when Sanders strongly endorsed her. Every major political speaker from Obama to Clinton herself praised Sanders for bringing progressive ideas to the public discourse. Now in the tight race, polls have been seesawing.The latest polls released Thursday and consolidated by Real Clear Politics showed Clinton leading by between 1 per cent and 9 per cent, enjoying a bounce from the Convention coverage and reversing Trump's edge.