PM Modi on Sunday descended on battleground West Bengal and Assam, unleashing a development offensive by launching and dedicating to people a slew of projects involving over Rs 14,000 crore, and highlighting "conspiracies" to target India's soft power like tea and yoga. PM Modi also slammed TMC-led government in Bengal saying people will bid Ram-Ram to its government and welcome BJP by chanting 'Jai Shri Ram'.

Modi's visit to the two states, which are likely to have assembly elections between March and May this year, was his second in a fortnight.

In Assam, he also pitched for setting up at least one medical college and a technical institution in each state that will impart education in the native language.

He devoted his speech in Assam's Dhekiajuli largely to his government's efforts for the state's development, but was aggressive and acerbic in his criticism of the Mamata Banerjee government in West Bengal's Haldia, where he said people expected "mamta" (affection) from her but got "nirmamta" (cruelty) instead.

The prime minister dedicated to the nation and laid the foundation for projects involving a whopping Rs 9,310 crore in Assam and over 4,700 crore in West Bengal, encompassing infrastructure like roads, oil and gas as also medical facilities. However, tea was the flavour of his visit to the two foremost producers of the brew.

Modi, who has often spoken about his past when he sold tea on trains as a young boy, alleged an "international conspiracy" was hatched to defame Indian tea and yoga.

"Documents have emerged to show that a conspiracy has been hatched outside the country to defame Indian tea. I am sure the tea workers of Assam will give a befitting reply."

"No tea garden worker in Assam can tolerate this attack and I am sure they will win this fight against these conspirators as they are stronger than these forces with vested interest," he asserted.

The prime minister was apparently referring to Swedish environmentalist Greta Thunberg's controversial 'toolkit', which she tweeted and then deleted, outlining ways in which people can participate in the farmers protest.

One of the points reportedly mentioned there was to "disrupt yoga and chai image of India in general". He raked up the issue once again while addressing a BJP rally in West Bengal's Haldia.

Conspirators want to destroy India's image with tea and yoga

"There are some conspirators who're trying to destroy India's image associated with tea and yoga -- made famous by iconic indians -- across the world. Has Didi spoken anything about these conspirators? The country will respond to such conspiracies with all the force at its command," he said,

Going hammer and tongs at Banerjee at his first public rally in West Bengal ahead of the assembly polls, Modi accused her of "criminalising politics, institutionalising corruption and politicising police".

"Bengal expected 'mamta' (affection) from Mamata Banerjee but got 'nirmamta' (cruelty) in the last 10 years... The TMC government is just a rebirth of the misrule of the Left Front government in the state, rebirth of corruption, of crime and criminals, of violence and attack on democracy" he alleged.

The TMC government has committed "several fouls in the last 10 years and the time has come to show it the 'Ram Card' in the assembly elections", he said.

Cautioning people about "match-fixing" between the TMC, Congress and the Left, Modi said only a BJP government can free the state of "misgovernance" and bring about a "real change" in their lives as was being experienced in Tripura.

He assailed the West Bengal government for not implementing central schemes like Ayushman Bharat and PM Kisan Samman Nidhi in the state, and asserted that once the BJP formed its government it will take a decision at the very first cabinet meeting to execute all such stalled programmes.

Mocking Chief Minister Mamata Banerjee for getting angry over slogans of 'Bharat Mata Ki Jai', Modi wondered why she remained silent when conspiracies were hatched to malign the country

Modi was referring to Banerjee's refusal to deliver her speech at a function to mark the 125th birthday of West Bengal's legendary freedom fighter Netaji Subhas Chandra Bose at Kolkata's Victoria Memorial after "Jai Shri Ram' slogans greeted her.

"There are some conspirators who're trying to destroy India's image associated with tea and yoga -- made famous by iconic indians -- across the world. Has Didi spoken anything about these conspirators? The country will respond to such conspiracies with all the force at its command," he said.

Referring to the game of football, a hugely popular sport in Bengal, Modi said that the people of the state are ready to show "Ram Card" to the TMC now.

"Bengal is a state that loves football. In football parlance, I want to say that the TMC government has committed many fouls. From corruption, misgovernance, extortion, to attack on opposition workers. The people are ready to show them the Ram card.

"The people of Bengal will bid Ram-Ram to TMC and chant Jai Shri Ram to welcome the BJP," he said, adding Trinamool Congress leaders and workers wanting to work for the country were quitting the state's ruling party and joining the saffron camp. 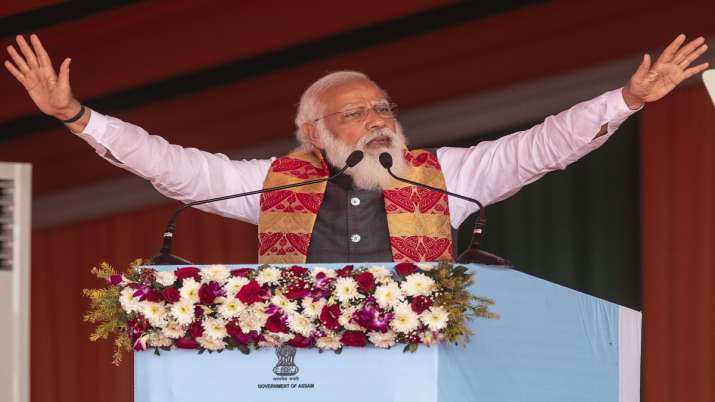 In Assam's Dhekiajuli, Modi made a strong case for setting up at least one medical college and a technical institution in each state that will impart education in the native language.

"I have a daring dream of each state having at least one medical college and a technical institution imparting education in the local language," he said, promising setting up such institutions in Assam after the assembly elections.

He said this will improve medical services in remote areas as more and more doctors will be able to reach out to people in their mother tongue and understand their problems.

The two medical college and hospitals will come up in Biswanath and Charaideo districts.

In India, teaching and learning have largely been in a foreign language but that could change with the advent of the National Education Policy (NEP) 2020.

"Taking inspiration from the National Education Policy, it will now be tried to teach all technical courses including medical, engineering in mother tongue," Modi had tweeted after the unveiling of the NEP.