​Braving cold weather, hundreds of protesters, many of whom gathered after offering Friday prayers at the Old Delhi's iconic Jama Masjid, took out peaceful demonstrations, under a heavy security cover and drone surveillance in the national capital, against the Citizenship Amendment Act, whereas in Mumbai a large number of people took part in pro and anti-CAA rallies.

Braving cold weather, hundreds of protesters, many of whom gathered after offering Friday prayers at the Old Delhi's iconic Jama Masjid, took out peaceful demonstrations, under a heavy security cover and drone surveillance in the national capital, against the Citizenship Amendment Act, whereas in Mumbai a large number of people took part in pro and anti-CAA rallies.

In Kolkata, where chief minister Mamata Baneerjee has been at the forefront of protests against the proposed National Register of Citizens (NRC) and the new citizenship law, the opposition Left Front and the Congress took out a joint rally to oppose the CAA.

With last Friday's memories still fresh in the minds of the security personnel and the local administration when the anti-CAA protests turned violent after Friday prayers in Uttar Pradesh as well as in the national capital, security was enhanced and patrolling intensified in sensitive areas across UP to ensure peace during the prayers.

Flag marches were conducted in some areas of Delhi's Northeast district and heavy police force was deployed in parts of the city.

Apart from the Jama Masjid, a protest was also held in Jor Bagh while the planned 'gherao' of UP Bhawan by the Jamia Millia Islamia students was foiled by the Delhi Police as protesters were detained as soon as they reached the venue. 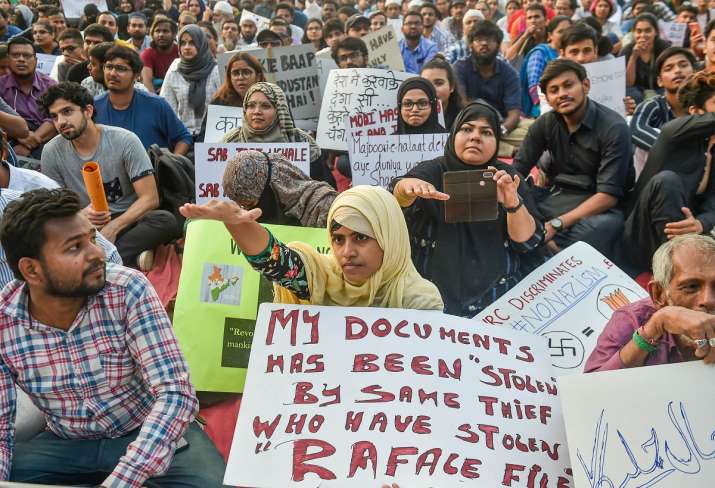 Hundreds of people with their hands tied marched towards Prime Minister Narendra Modi's residence to demand the release of Bhim Army chief Chandra Shekhar Aazad and to protest against the new law, but were stopped on the way by police.

Amid heavy security arrangement and drone surveillance, the protesters including Bhim Army members started from Dargah Shah-e-Mardan in Jor Bagh in the national capital and were stopped by police at a barricade en route the PM's residence at Lok Kalyan Marg.

They participated in the march with their hands tied, saying they did it so that they could not be blamed for violence and arson during the protest.

Congress leader Alka Lamba and former Delhi MLA Shoaib Iqbal were among those who joined the demonstrations.

In Mumbai, students and social activists held a protest against the CAA and the NRC at the Azad Maidan, while a large number of people gathered for a pro-CAA rally at the historic August Kranti Maidan, where a massive anti-CAA demonstration was held last week.

At Azad Maidan, protesters shouted slogans against the government with one of the protesters alleging that the act was aimed "not against just one community but against the whole country."

They were also carrying photographs of Dr Babasaheb Ambedkar while pictures of V D Savarkar, Mahatama Jyotiba Fule, Bharatmata and Shahu Maharaj were displayed on stage. 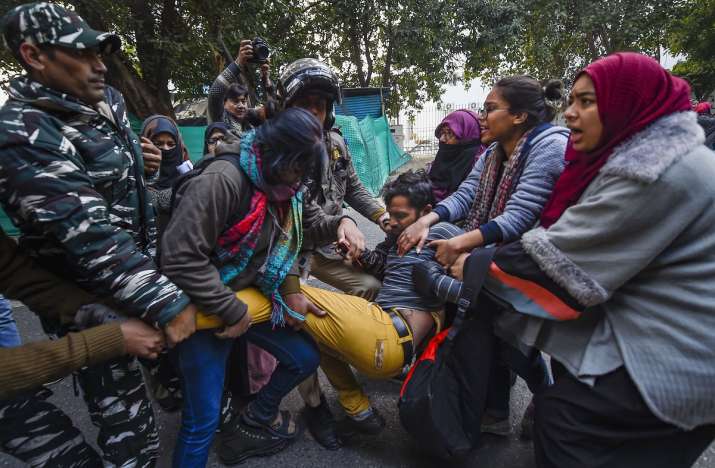 Leader of Opposition in the Maharashtra Legislative Assembly Fadnavis said the new law does not take away the citizenship of any Indian.

The BJP is creating awareness among people that the act intends to help the minorities from neighbouring countries who have faced religious persecution, he said, and accused the opposition of misleading Indian Muslims.

"Pakistan did not fulfill the (implicit) assurance during Partition that minorities will be protected (in both the countries). Hence, India has to look after them because they are our people," said the former chief minister.

The Sanvidan Sanman Manch' has been organising such rallies in various parts of the city. One such rally in support of CAA and NRC was organised at Dadar last week.

The organisers had planned a support march between the August Kranti Maidan to Lokmanya Tilak statue at Girgaum Chowpatty but Mumbai police denied them permission for the march citing law and order issues.

Carrying posters and placards against the BJP-led Union government, Congress and LF members shouted slogans against bringing in the 'divisive' CAA.

The issue of CAA has been a major flashpoint in Bengal politics with Chief Minister Banerjee declaring that it will not be implemented in the state.

The state has witnessed violent protests and arson earlier this month.

In Ajmer, a large number of Muslims, including khadims of the famous Ajmer dargah, took out a protest march against the amended act, demanding its rollback.

The march started from the dargah and concluded at the collectorate, after passing through the crowded dargah bazaar.

"The Centre should repeal the act, which is an attack on the Preamble of the Constitution. The government should also say that the NRC will not be implemented (countrywide)," Sarwar Chisty, a khadim of the dargah, said.