Prime Minister Narendra Modi will visit Tamil Nadu and Kerala on February 14 and lay the foundation stone of multiple projects. One of the key highlights of PM Modi's visit is going to be the handing over of the Arjun Main Battle Tank (MK-1A) to the Indian Army, at Chennai. The tank has been indigenously developed in India.

Prime Minister Narendra Modi will visit Tamil Nadu and Kerala on February 14 and lay the foundation stone of multiple projects. One of the key highlights of PM Modi's visit is going to be the handing over of the Arjun Main Battle Tank (MK-1A) to the Indian Army, at Chennai. The tank has been indigenously developed in India.

At around 3:30 PM on February 14, Prime Minister will lay the foundation stone and dedicate various projects to the nation, at Kochi. These projects will add crucial momentum to the growth trajectory of these states and help hasten the pace of realizing full development potential.

Prime Minister Modi will inaugurate the Chennai Metro Rail Phase-I extension, completed at a cost of Rs 3,770 crore, and commission the passenger services from Washermenpet to Wimco Nagar. This 9.05 km long extension will link North Chennai with the Airport and Central Railway Station.

Prime Minister will inaugurate the fourth Railway line between Chennai Beach and Attipattu. This 22.1 km section, laid at a cost of Rs 293.40 crore, traverses through Chennai and Thiruvallur Districts and will ease out traffic from Chennai Port. This section connects the Chennai Port and Ennore Port and passes through major yards, providing operational flexibility for the movement of trains.

Prime Minister will also inaugurate the Railway Electrification of single line section in Villupuram - Cuddalore - Mayiladuthurai - Thanjavur and Mayiladuthurai-Thiruvarur. Completed at a cost of  Rs. 423  crore, the electrification of this 228 km route will enable free flow of traffic without the need for a change of traction between Chennai Egmore and Kanyakumari and would result in saving of Rs.14.61 lakh per day on fuel cost.

During the event, Prime Minister will hand over the State-of-the-Art Arjun Main Battle Tank (MK-1A) to the Indian Army. This Battle Tank has been indigenously designed, developed and manufactured by CVRDE, DRDO along with 15 academic institutions, 8 labs and several MSMEs.

Prime Minister will lay the foundation stone for the extension, renovation and modernization of the Grand Anicut Canal System. The canal is important for irrigation in the delta districts. The modernization of this canal will be taken up at a cost of Rs.2,640 crore, and will lead to an improvement in the water carrying capacity of the canals.

Prime Minister will also lay the foundation stone for the Discovery Campus of IIT Madras. The Campus will be built at Thaiyur near Chennai at an estimated cost of Rs.1000 crore in the first phase, over an area of 2 lakh sqm.

Governor and Chief Minister of Tamil Nadu will also be present on the occasion. 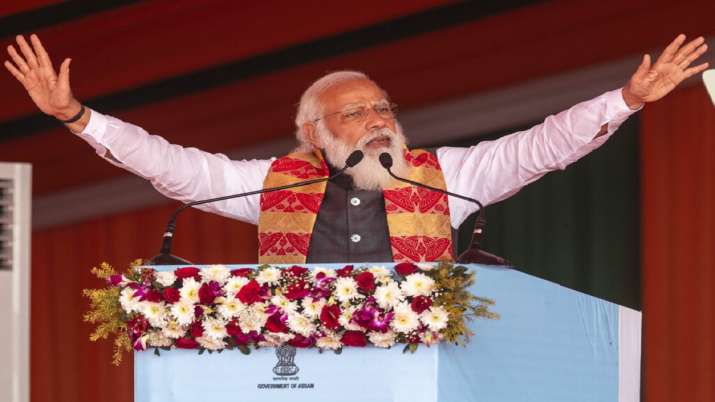 Prime Minister will dedicate to the nation the Propylene Derivative Petrochemical Project (PDPP) of BPCL. The complex will produce Acrylates, Acrylic Acid and Oxo-Alcohol, which are at present predominantly imported, and is expected to result in saving of about Rs.3700 to 4000 crore/annum in foreign exchange. Constructed at a capital cost of about Rs 6000 crore, the PDPP Complex has been set up close to the refinery to achieve integration of feedstock supply, utilities, off-sites and other facilities. It will benefit the downstream sector in saving huge costs as a result of the ready availability of feedstock and optimized supply chain management. With the commissioning, Kochi Refinery has become the first Indian refinery to produce niche petrochemicals.

Prime Minister will also dedicate to the nation the Ro-Ro Vessels at Willingdon Islands, Cochin. The International Waterway Authority of India will deploy two new Roll-on/ Roll-off vessels between Bolgatty and Willingdon Island on National Waterway-3. The Ro-Ro vessels, MV Adi Shankara and MV CV Raman, will have the capacity to carry six 20-feet trucks, three 20-feet trailer trucks, three 40-feet trailer trucks and 30 passengers each. The service will benefit trade as a result of reduced transportation cost and transit time, and will also lead to reduced congestion on the roads of Kochi.

Prime Minister will inaugurate the International Cruise Terminal “Sagarika” at Cochin Port. Situated at the Ernakulam Wharf on Willingdon Island, it is India’s first full-fledged international cruise terminal. It has state-of-the-art facilities and has been constructed at a cost of Rs.25.72 crore. It will promote tourism, give a fillip to development and will act as an effective instrument for employment generation, earning revenue and foreign exchange.

Prime Minister will also inaugurate the Marine Engineering Training Institute, Vigyana Sagar, Cochin Shipyard Ltd. It is a premier Maritime Learning Centre and is the only Maritime institute in India functioning within a shipyard, having extended training facilities for trainees on various vessels under construction or repair. Constructed at a capital cost of Rs 27.5 crore, the institute has an intake capacity of 114 fresh graduates. It will create a talent pool of marine engineers and personnel to fulfill the requirement of the Maritime industry in India and abroad.

Prime Minister will also lay the foundation stone of Reconstruction of South Coal Berth at Cochin Port. It is being reconstructed at an estimated cost of Rs 19.19 crore under the Sagarmala Scheme. Upon completion, a dedicated berthing facility will be available for chemical handling at Cochin Port.  Reconstruction of the Berth will ensure quick and efficient handling of cargo and reduced logistics cost.

Governor and Chief Minister of Kerala, along with Union Minister for Petroleum and Natural Gas will also be present on the occasion.