Madhya Pradesh Chief Minister Kamal Nath's government has received a blow as Suwasra Congress MLA Hardeep Singh Dang tendered resignation on Thursday. The development has come just when Rajya Sabha elections are around the corner. According to sources, Hardeep Singh Dang is missing for past 3 days. 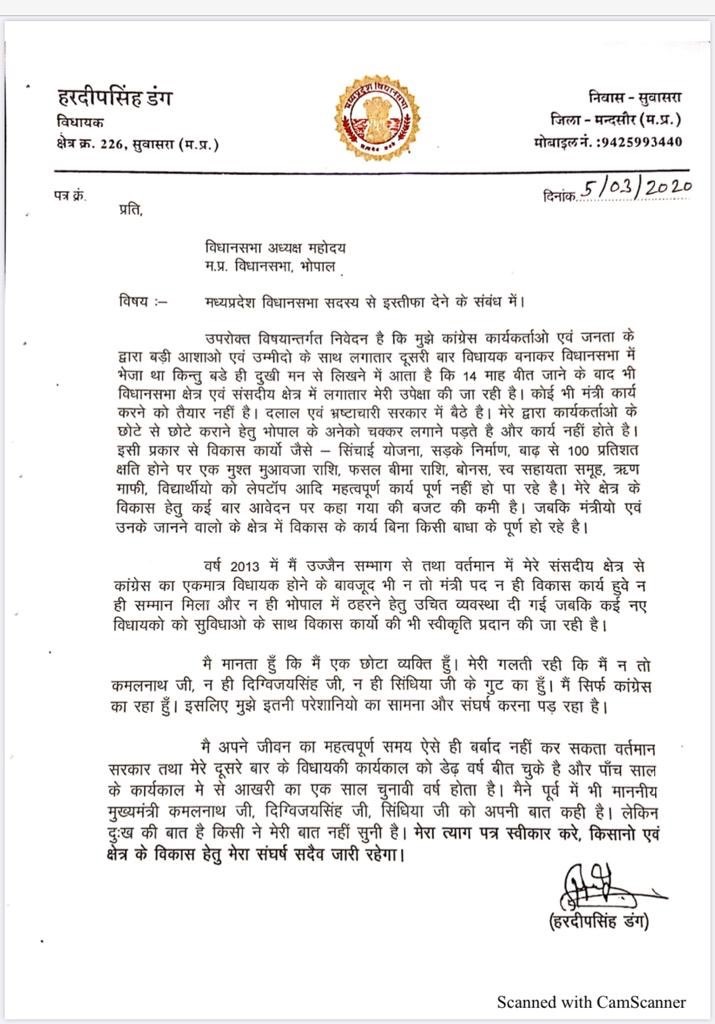 The Congress does not have an absolute majority in the state as out of 230 Assembly seats, the party has 114 seats and the BJP has 107. The Kamal Nath government is surviving with the support of four independents, two BSP MLAs and one from the SP.

Political analysts say the BJP is eyeing three Congress MLAs, three independents and two BSP and one SP MLA. If they cross over to the BJP or remain neutral then the government's troubles may increase as there is a difference of only seven MLAs between the Congress and BJP.

The Rajya Sabha seat of the Congress may also be affected by the neutrality of the MLAs, as a member needs the support of 58 MLAs, in which case one member of Congress and BJP is certain to be elected, but for the other seat both parties have low figures. The Congress has 56 MLAs, while the BJP has 49.

The state's politics has been in flux for three days following the Congress' allegations of BJP offering crores to SP, BSP and independent MLAs and holding 10 MLAs 'hostage'.

Dang's resignation has added a new twist to the saga even as his whereabouts are not known.

But his resignation has not yet reached Assembly Speaker Narmada Prasad Prajapati and Chief Minister Kamal Nath.

Prajapati said, "I have received news of Suvasara MLA Hardeep Singh Dang's resignation. He has not submitted his resignation directly to me. When he meets me directly and submits his resignation, I will rule on him and will consider and take necessary steps."

Similarly, officials under Chief Minister Kamal Nath said Dang's resignation has not reached the Chief Minister who has described Dang as a Congress MLA.

Two other Congress MLAs - Bisahu Lal Singh and Raghuraj Singh Kansana - and independent MLA Surendra Singh Shera are out of Bhopal. All four MLAs are said to be in Bengaluru.

Watch | BJP did 'chirharan' of democracy in Madhya Pradesh: Congress