As coronavirus cases continue to rise rapidly across the state, the West Bengal government on Tuesday decided to impose strict lockdown in COVID-19 affected areas by clubbing together containment zones and buffer zones near them from July 9. The administration stated that the buffer zones along with containment zones will be put under total lockdown from 5 pm on Thursday.

As coronavirus cases continue to rise rapidly across the state, the West Bengal government on Wednesday published a fresh list of Containment Zones in Kolkata and adjacent Howrah and North 24 Parganas districts where lockdown would be imposed for a week from 5 pm tomorrow. The revised list for other parts of the state is likely to be published tomorrow. Kolkata city has 25 containment zones Howrah and North 24 Parganas have 56 and 94 zones respectively.

Some of these areas are namely Bhowanipore, Alipore, Tollygunge, Panditiya Road, Mukundapur, Gariahat, Lake Road, Ultadanga, Kankurgachi, Beliaghata, Phoolbagan, HUDCO, Bijoygarh, Jadavpur, New Alipore, Kasba, Ajoynagar and Baghbazar. The containment zones and buffer zones around them were clubbed together to constitute a “broad-based” containment zone where a total lockdown will be imposed from 5 pm on Thursday, a state government order said on Tuesday. 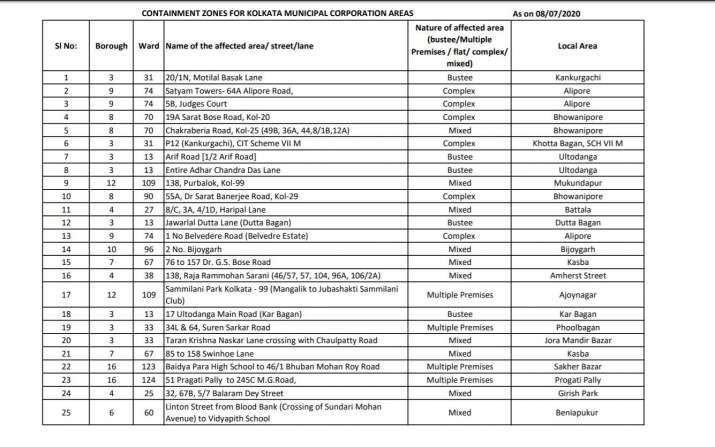 West Bengal on Tuesday reported its highest single-day COVID-19 deaths with 25 patients succumbing to the disease. The death toll in the state is now 807. Of the deaths reported on Tuesday, Kolkata accounted for 10, while nine patients died in North 24 Parganas, three in South 24 Parganas and one each in Paschim Medinipur, Purba Medinipur and Hooghly districts, it added.