The Trinamool Congress has already said it is "disinterested" in coordinating with the Congress during the Winter Session of Parliament but maintained that it would cooperate with other opposition camps.

Parliament Winter Session News: The Congress and the Trinamool Congress held separate protests outside Parliament on the first day of the Winter Session to corner the government over various issues, including the farm laws. While the Congress along with other Opposition parties tried to project a united front over the three farm laws, the Trinamool held a separate protest signalling that it wants a prime Opposition party tag of itself.

The Trinamool Congress had on Saturday said it is "disinterested" in coordinating with the Congress during the upcoming winter session of Parliament but maintained that it would cooperate with other opposition camps on various issues concerning people's interest.

The TMC's rebuttal to the Congress came days after Kharge, the leader of opposition in the Rajya Sabha, had said the grand old party would coordinate with all opposition camps, including the TMC, during the winter session.

Congress MPs led by party chief Sonia Gandhi and former president Rahul Gandhi staged a protest in Parliament complex over the issue of farm laws. The Congress president earlier addressed MPs of both the houses in the office of the Congress Parliamentary Party. Party leaders then marched towards Mahatma Gandhi's statue in the complex and raised slogans against the Central government and the prime minister. The Congress MPs held a banner saying, "We demand repeal of black farm laws". 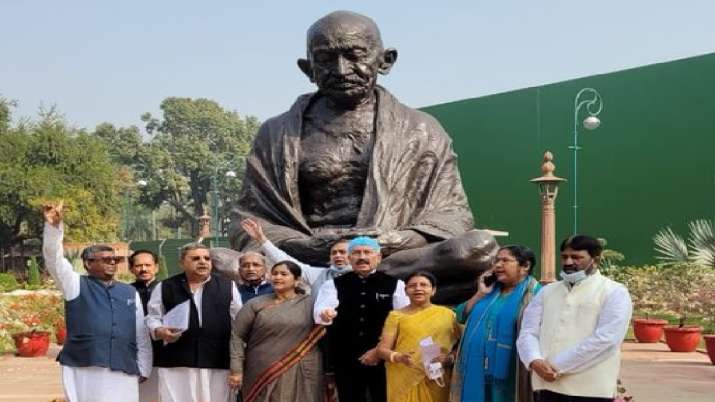 Trinamool Congress MPs too protested at Mahatma Gandhi statue demanding a discussion over Farm Laws Repeal Bill, 2021. "TMC wanted to have a discussion on Farm Laws Repeal Bill but the government is afraid to discuss the conditions of the farmers. Govt is not giving Opposition a chance to speak on behalf of the farmers," TMC MP Kalyan Banerjee said.